When Paire calms down, it’s Moutet who “Rebels”

Corentin Moutet faces Benoit Paire in the race for Final 4 of UTS2. It promises to be an entertaining duel between two French rebels in search of satisfaction. 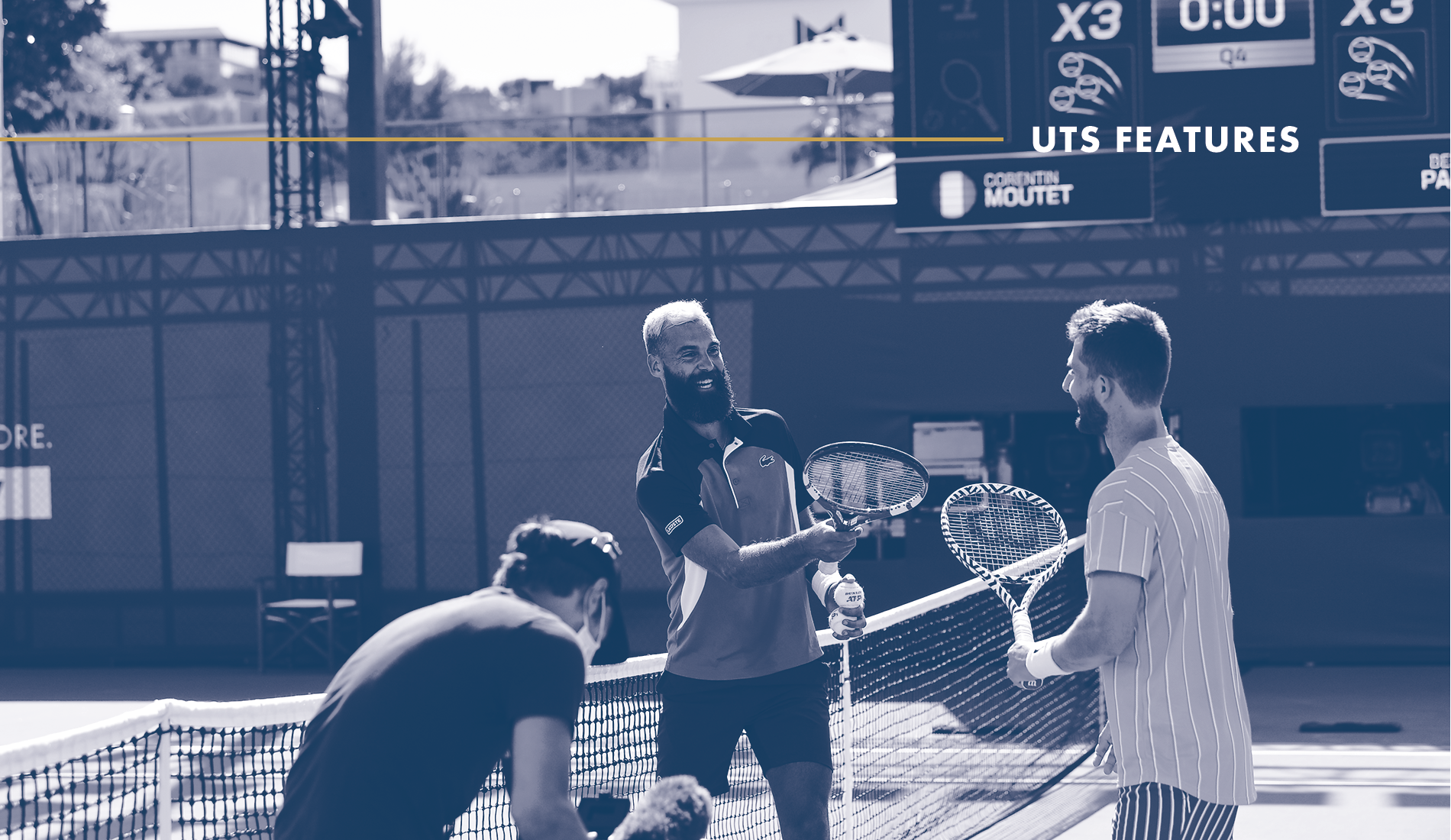 When the disruptive students of the Mouratoglou Tennis Academy meet, the rallies (baseline and verbal) could well produce sparks. Frenchmen Corentin Moutet and Benoit Paire will square off on Saturday for the second and final weekend of the Ultimate Tennis Showdown 2, in Sophia-Antipolis.

With a victory and a defeat each on the clock, the confrontation between The Tornado and The Rebel, whose nicknames already say a lot, promises to be explosive in Group B. Especially since the stakes will be high: the first place of the group and the ticket for the Final 4 that goes with it. A bonanza, promised to the one who will master his nerves the best.

The Rebel “here to win”

After a UTS1 where the two Frenchies proved to be up to their reputation – broken rackets, tirades against umpires and other players’ coaches, flowery language, etc. -, the second edition of the tournament was supposed to start on a new basis. Before UTS1, “The Rebel” promised:

“If people want to have fun and have a good time […] they can look at me because I’m going to be mad, I’m going to get mad at my opponent.”

But since his failure on the court (last place in UTS1 standings), Paire has decided to put aside his “Rebel” touch to achieve a much more ambitious goal than entertaining the gallery: “I’m here to win UTS2”.

Armed with a more positive state of mind, the Avignon native seems to have taken the right course. Better use of UTS cards notably enabled him not to hang around the court too long on Saturday; he avoided sudden death against Dustin “The Artist” Brown. “I was more focused, I really want to win every quarter,” he said after his calm victory (3-1).

“I want to raise my level, to raise it, to train hard.”

Rarely has The Rebel served such a speech in his career. And for the moment, he abides by those words, even if that was not enough to follow up on a second success against Fernando Verdasco on Sunday.

You can feel it in his game, his seriousness on the pitch and his will to be on top transforms him compared to the first edition of UTS. The theatrics and the bloodshed gradually give way to a more neutral attitude. Even if the 31-year-old bearded man still delights us with small fleeting crises, his frustration he now reserves for viewers during downtime. Well, almost always …

Looks like @benoitpaire would like to use his “call mom” card so that she pull off the three-point volley for him.#UTShowdown pic.twitter.com/y98UCE0ajt

Conversely, Moutet still has a long way to go to tame his moods. “It’s hard to manage your emotions,” uttered the aptly named Tornado after his success against Fernando Verdasco, in sudden death, last Saturday. And yet, he swore before the start of the competition:

“Tennis, this is not a circus. It’s more important for people to see tennis than to see someone break a racquet.”

A not-so-easy mantra to apply on UTS’s center court, for the only one to have made a habit of destroying his racquets there.

There is something of Paire in Moutet, even if the latter refuses to compare: “He is not my model”, he says.

His matches are more like a roller coaster than a walk in the park. And despite his fiery temperament, the Ile-de-France native, who “works a lot on [his] emotions”, believes he has “improved a lot”.

“I know I have emotions on the court and have to deal with them. It will be like this all my life. I have to live with it and accept it,” says The Tornado. But since I won the game (against Verdasco), I don’t think I handled them so badly. “

However, the young Frenchman, annoyed by an imprecise setback, was surprised the next day in sudden death by Dustin Brown, 239th player in the world. Every point Moutet lost felt like an existential crisis, one that strained his mind (and morale). A winning rally and the comeback seemed to be underway! An unforced error and his face was resigned…

Moutet  has found a format in UTS that might suit him. Or bring out his personality … More intense and spontaneous than classic matches, UTS meetings have revealed the edgy character of The Tornado, which is very similar to that of … Benoit Paire.

But “The Rebel” seems to have kept his promise to limit his tennis shots, without letting his moods get the better of him. Experience certainly plays a key role in this development.

Fortunately for Moutet, no sanction is provided at UTS for gestures of frustration, as demonstrative as they are. The down times are there to evacuate this anger, and the Frenchman has made it an essential meeting with his coach to transform them into improvised yoga sessions.

The French had even already used this method at UTS1. Without much success.

“Tennis has to be spectacular because of the tennis. I don’t want to be noticed for my behavior,” said the 75th player in the world.

The paradox between words and deeds is edifying. But with more racquets exploded than fingers on one hand, Moutet’s youth regularly catches up with him.

Stung, frustrated and angry, The Tornado has not yet found the right formula to be appeased. However, he is still in the running to qualify for the UTS2 Final 4. In Group B, the four players are down to one win and one loss each. Everything is still possible then.

On Saturday, facing his eldest against whom he lost in his very first match at UTS1, Moutet knows he will have to “adapt”:

“Benoit is quite unpredictable! In his game, he knows how to do everything. It’s going to truly depend on his form for that day.”

And as Moutet puts it so well: “There’s not much to expect with this kind of player.”