Home » Vidéos » Federer the saint and Djokovic the demon, is it that simple? – Match Points excerpt

Federer the saint and Djokovic the demon, is it that simple? – Match Points excerpt

Roger Federer and Novak Djokovic are two of the greatest legends of the Open Era. But they are treated far differently by fans and media. Today on Match Points, Josh Cohen asks the panel how they explain the obvious discrepancies. 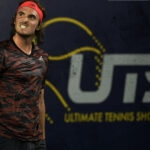 How could UTS be included in tennis’ regular schedule? – Match Points #9
Next 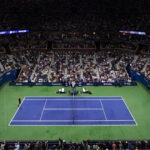 In the last episode of Match Points, Marion Bartoli, Noah Rubin and Ben Rothenberg debate the disparity in image that exists between Roger Federer and Novak Djokovic.

Is Federer unfairly given leeway when he makes mistakes, and is Djokovic hammered whenever he so much as puts a foot wrong? Today Josh Cohen asks his guests to discuss Gilles Simon’s recent comments about the media framing Federer as “the Good Guy”, while painting Djokovic as “the Bad Guy”.

“In fact, Djokovic is not unpopular”

In an interview with L’Equipe on July 8, Gilles Simon defended Djokovic:

“Novak made a big mistake to give the stick to get beaten at the Adria Tour, because everyone wants to beat him. It’s a shame. I see him like any human being, with his qualities and his faults. But it turns out that, for Federer, we only talk about his qualities. And that of Novak’s faults. It’s the media that wants it that way. I tell myself that Novak is trying to attack complicated issues in the interests of the players in general. And I was annoyed by this Adria Tour story because, by making a huge mistake, all this work falls apart. It’s easy to say now: “Do not listen to Novak anymore!”

For Rothenberg, this difference in treatment between the two players is not only in the media:

“I don’t know if it’s from the media, it’s a preference a lot of fans have,” he says. “People are just more drawn to Federer, he deserves credit for it. Building such a popular image and brand takes effort. In fact, Novak is not unpopular. It’s just very difficult to be compared to Federer, possibly the most beloved champion in history.”

These comments are corroborated by Marion Bartoli, who finds it excessive to label Federer as good and Djokovic evil:

“The treatment of Djokovic and Federer is not that different, I find that excessive,” she says. “I don’t think we always protect Roger, he was able to build an image and that brand of perfect person. He is not far from that but he’s human, he can make mistakes. “

The 2013 Wimbledon champ mentions in particular the autographs signed by Federer on July 9, without a mask and using the pens of the fans.

Bartoli says that Djokovic has room to grow and will likely come away from the events of the Adria Tour and his Covid-19 experience as a much wiser person.

“They are on different pedestals”

In a live session on the Twitch platform with Gaël Monfils, on June 24, Simon attacked Rubin, and the fact that the American had called for the resignation of Novak Djokovic from the presidency of the ATP Players Council after the Adria Tour fiasco and his absence from a crucial ATP Zoom meeting.

“The first wave of attacks against Djokovic, it’s very revealing. Since when does Noah Rubin have a whole page to demolish Djokovic? You imagine they went looking for a lot of people to come up with Noah Rubin,” he said. Simon confirmed those comments when speaking to L’Equipe: “When Rubin calls for Novak’s resignation as President of the Players Council, he shoots himself in the foot.”

Rubin did not directly respond to Simon’s attacks. He justifies the difference in notoriety with the Swiss by mistakes made by the Serbian in the past.

“Djokovic made mistakes, and so did Federer, but on other levels. They’re kind of on different pedestals. … I think Simon is a little bit in the wrong. Federer has built this kind of from the ground up, he worked really hard. He was a racquet-throwing 18-year-old that turned into this guy, this perfect person. He’s made mistakes but he’s one a pretty good job throughout his career to uphold that.”

One response to “Federer the saint and Djokovic the demon, is it that simple? – Match Points excerpt”