Match Points is a talk show about tennis, hosted by Josh Cohen for Tennis Majors. In this episode, Josh asks the panel how they feel the Adria Tour fiasco has affected the standing of Novak Djokovic. 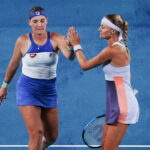 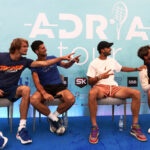 Is Novak Djokovic to blame for Adria Tour disaster? – Match Points #6
The figures

Our Match Points panel consists of former Wimbledon champion and world No 7 Marion Bartoli, ATP world No 225 Noah Rubin (founder of Behind the Racquet) and American journalist Ben Rothenberg.

The guests joined Cohen to give their take on whether the fiasco of the abandoned Adria Tour will diminish the legacy of Novak Djokovic, who organised the ill-fated event, where several players, including Djokovic himself, tested positive for Covid-19.

Rubin said his personal dealings with Djokovic had always been pleasant but that as the world No 1, he needs to act more sensibly.

“He has to understand just how much power he holds,” the American said. “For somebody with that much influence, it comes with a responsibility, and I don’t think he’s harnessed it properly yet.”

“We don’t know if everyone’s going to be OK”

Rothenberg said the events of the Adria Tour should not be underestimated.

“I do think this is a big deal,” he said. “I don’t mean to be over-dramatic or hyperbolic here but this could have gotten people killed. We don’t know if people in the Adria Tour, who were fans, have contracted this disease, we don’t know if everyone’s going to survive this, if everyone’s going to be OK, if people will have long-lasting health impacts. And it does come from a sort of arrogance, on the part of the organisers – of which Novak was one – so I don’t think this is a real big event.”

And Rothenberg said his criticisms of Djokovic and the Adria Tour were not personal.

“I’ve had great interactions with Novak in my time with him on Tour,” he said. “He’s a very gracious guy, he’s a very warm guy, he’s a very well-meaning guy. But intentions aren’t all that matters in the world. Outcomes and consequences do matter as well and there were definitely some pretty terrible consequences to his actions and to the actions of the Adria Tour, more largely.”