Every day, Tennis Majors takes you back in time to relive a tennis event which happened on this specific day. On this day in 2013, Andy Murray edged Novak Djokovic, 6-4 7-5 6-4, to become the first male British player to conquer the Wimbledon crown in 77 years 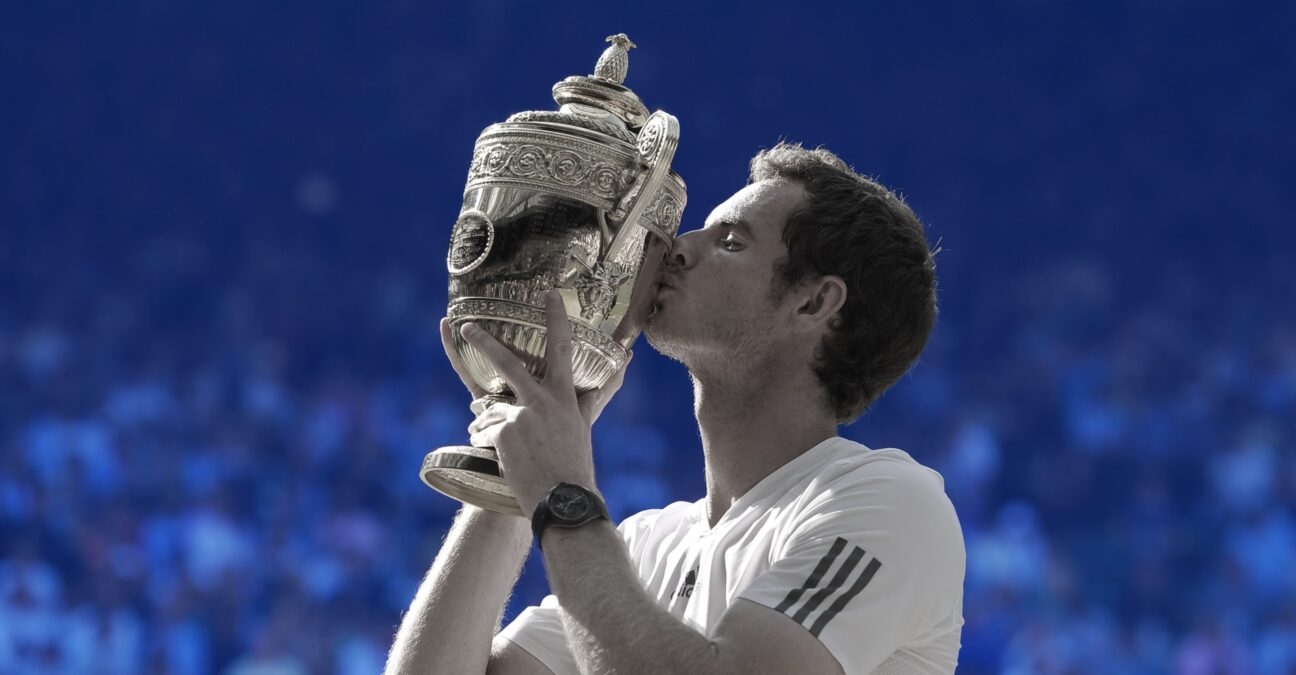 On this day, July 7, 2013, Andy Murray defeated Novak Djokovic, 6-4, 7-5, 6-4, to become the first British male player to conquer the Wimbledon crown in 77 years, since Fred Perry’s triumph in 1936. This was the outcome a lifetime quest for Murray, who had been stopped previously three times in the semi-final (by Andy Roddick in 2009, then by Rafael Nadal in 2010 and 2011) and once in the final, in 2012, by Roger Federer. It was Murray’s second Grand Slam title, as he had already beaten Djokovic in the 2012 US Open final, after having lost his four first major finals.

Andy Murray, from Scotland, was born in 1987. He obtained his first remarkable results in 2005, reaching his first final in Bangkok as world No109 (lost to Roger Federer, 6-3, 7-5). In 2006, he claimed his first title on the tour in San Jose, edging Lleyton Hewitt in the final (1-6, 6-2, 7-6), but his breakthrough year was 2008. That year, not only did “Muzz” claim five titles, including two Masters 1000 titles in Cincinnati and Madrid : he also reached the quarter-finals at Wimbledon (defeated by Rafael Nadal, 6-3, 6-2, 6-4),  and also finished runner-up to Roger Federer at the US Open (6-2, 7-5, 6-2). He finished the season as world No 4, a spot he was going to occupy in the next four years, being a part of the “Big 4” dominating the game at the time. During this period, at the Grand Slam tournaments, Murray reached the semi-finals on six occasions and the final round on five occasions without ever triumphing. Andy Murray then hired Ivan Lendl as a coach, because they had a similar story : Lendl had also lost several major finals before eventually claiming his first title at the 1984 French Open. The magic worked : in 2012, after a painful loss against Roger Federer in the Wimbledon final, Muzz brilliantly took his revenge against the Swiss, destroying him in the Olympic Games final (6-2, 6-1, 6-4) to win the gold medal. Less than two months later, he edged Novak Djokovic in a dramatic US Open final during which victory almost escaped him (7-6, 7-5, 2-6, 3-6, 6-2), becoming the first British player to claim a major title since Fred Perry won Wimbledon in 1936. Now, all he needed to be make his dream come true and satisfy an entire country was to triumph at the All England Club.

Novak Djokovic was born the same year 1987. He entered the top 100 in 2005, finishing the year as world No 83. In 2006, the Serb made himself famous by reaching the quarter-finals at Roland-Garros while being ranked only No 63, after he beat world No 9 Fernando Gonzalez in the second round. Later that year, Nole claimed his first title on the tour, beating Nicolas Massu (7-5, 6-3) in the final in Amersfoort. His breakthrough year was 2007, when he reached the semi-finals at Roland-Garros and Wimbledon (beaten each time by Rafael Nadal) before making his way to the US Open final where he was defeated by Roger Federer (7-6, 7-6, 6-4). At the start of 2008, he triumphed for the first time in a major tournament, edging Jo-Wilfried Tsonga in the Australian Open (4-6, 6-4, 6-3, 7-6). Djokovic then remained world No 3 in the next three years, often reaching the final rounds at major events where Federer and Nadal kept preventing him from adding more major crowns to his list of achievements. Things changed in 2011, when Djokovic played a close to perfect first-half of the season. Triumphing at the Australian Open at Andy Murray’s expense, he remained undefeated for 42 matches, until Roger Federer edged him in the semi-finals of Roland-Garros. After that, the Serbian had accumulated four new Grand Slam crowns (Wimbledon and the US Open in 2011, the Australian Open in 2012 and 2013). He was still world No. 1 in July 2013.

Wimbledon is the oldest and the most prestigious tennis tournament in the world. Held by the All England Lawn Tennis and Croquet Club since 1877, the tournament moved into its current location in 1922, the same year when the Center Court was built. Considered by many as the most intimidating court in the world, with its famous Rudyard Kipling quntote above the entrance (“If you can meet with triumph and disaster and treat those two impostors just the same”), the Centre Court had seen the best players of all time competing for the title. After the US Open switched to clay and then hard court in the 1970’s, and after the Australian Open switched to hard court in 1988, Wimbledon remained the only Grand Slam tournament to be played on grass, a surface that is usually more suitable for serve-and-volley players. Not only did Wimbledon keep its surface, but it also maintained old-fashioned traditions such as its white dress code.

The facts : Andy Murray, a British champion at last

The 2013 Wimbledon Championships started with two major surprises : first, Rafael Nadal had lost in the first round against 135th ranked Steve Darcis; then, in the second round,  seven-time champion Roger Federer was sent home by Sergiy Stakhovsky, ranked No 116. Meanwhile, the two top-ranked players in the world, had made their way easily until the later rounds. In the quarter-finals, Andy Murray had to battle five sets to overcome Fernando Verdasco (4-6, 3-6, 6-1, 6-4, 7-5), before Novak Djokovic was threatened in the semi-finals by Juan Martin del Potro, escaping only in five sets as well (7-5, 4-6, 7-6, 6-7, 6-4).

This Wimbledon final was the 19th encounter between the two men. So far, Djokovic led 11-8. Although Murray had dominated his Serb rival to claim his first major title at the 2013 US Open, Djokovic had beaten him three times since then, the last time in the final round of the Australian Open (6-7, 7-6, 6-3, 6-2).

There was a lot at stake for Andy Murray. In New York,  he had already brushed off his “runner-up” reputation, but he was expected to triumph at Wimbledon at some point in his career. 77 years of pressure weighed on his young shoulders : he had to become the first Brit to lift the trophy since Fred Perry. After three semi-final losses, he thought his hour had come in 2012, when he finally reached the final, only to have his dream ruined by Federer. The Scot had not been able to withhold his tears at the trophy ceremony. Losing another final at Wimbledon would devastate him.

In a 40° heat, . the three first games lasted no less than 20 minutes. Muzz was the first to obtain break points, in the very first game. It would take him seven break points before the Serb gave up his serve. After all these efforts, Murray saw Djokovic breaking back in the next game, but Nole, who committed an unusual number of 17 unforced errors throughout the set, lost his serve again at 3-3. After an hour of play, the Scot took the first set, 6-4.

In the second set, Novak Djokovic increased his level to fight back and took the lead, 4-1. Murray managed to even the score, and eventually, he broke Djokovic’s serve at 5-5. Winning his serve to love in the next game, the Scot was now ahead by two-sets-to-love 6-4, 7-5.

At the start of the third set, Murray took his opponent’s serve and seemed to be cruising for a three-set win. Novak Djokovic didn’t intend to let him triumph so easily, and, starting a dropshot campaign, he got ahead, 4-2. It was not enough to discourage the Scot, who came back and was now up 5-4, serving for the title. It took 12 minutes and four match points, but Djokovic eventually missed the forehand that made Andy Murray the new Wimbledon champion. 77 years after Fred Perry, a British player had eventually won The Championships in front of his own crowd.

“It feels slightly different to last year,” joked Murray on court. “Last year was one of the toughest moments of my career. It was a tough match and an unbelievably long final game. I don’t know how I managed to come through. I’m just so glad.“

What next? Murray and Djokovic would both win multiple Slams are be ranked No. 1

Andy Murray would finish 2013 as world No 4 and would have to undergo back surgery at the end of the year. He would struggle to get back to his best level in 2014, but in 2015, he would become world No 2 again. After losing three Grand Slam finals to Novak Djokovic, two in Melbourne (2015, 2016) and one in Paris (2016), Murray would claim a second title at Wimbledon in 2016, edging Milos Raonic (6-4, 7-6, 7-6). He would then start a marathon chase to become world No 1 in November and finish the season on top of the world. He would remain the top-ranked player for 41 weeks, until August 2017. His career would then be disturbed by a hip injury, requiring several surgical operations, and, following Wimbledon 2017, he would only be able attend five more Grand Slam events (including Wimbledon 2021).

In 2013, Novak Djokovic would lose the world No 1 spot to Rafael Nadal. Between Wimbledon 2015 and Roland-Garros 2016, Nole would achieve the feat of winning the four Grand Slam tournaments in a row. He would struggle in the next couple of years, but he would become world No 1 again in 2018, and he would claim five more Grand Slam crowns. By June 2021, he would hold 19 Grand Slam crowns, and he would also break Federer’s record for most weeks at world No. 1 in March 2021