Each day, Tennis Majors takes you back in time to an important moment in tennis history. On this day, June 28, in 2012, Lukas Rosol upset Rafael Nadal at Wimbledon. 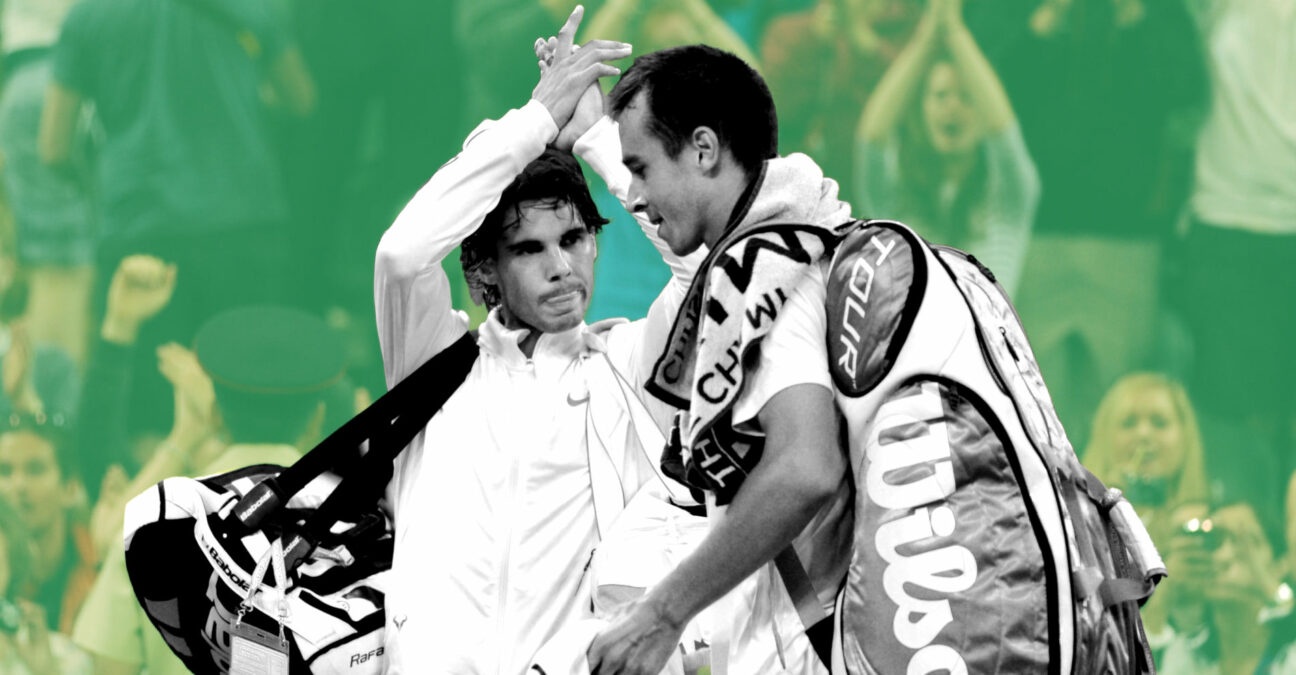 Rafael Nadal of Spain waves farewell to the Centre Court after his defeat to Lukas Rosol, right

On this day, June 28, 2012, in the second round of Wimbledon, Rafael Nadal suffered a shocking loss to unheralded world No 100 Lukas Rosol (6-7, 6-4, 6-4, 2-6, 6-4). The Czech played a close-to-perfect match to eliminate the Spaniard, who had reached the final in his five last appearances at the All England Club (claiming the title twice) and who had played the final of the last four Grand Slam tournaments. For Nadal, it was the beginning of a series of disappointments at Wimbledon — where the 2008 and 2010 champion would not go past the fourth round again until 2018.

Wimbledon is the oldest and the most prestigious tennis tournament in the world. Held at the All-England Lawn Tennis & Croquet Club since 1877, it moved to its current location in 1922. — the same year when the Centre Court was built. Considered by many as the most intimidating court in the world, with its famous Rudyard Kipling quote above the entrance (“If you can meet with triumph and disaster and treat those two impostors just the same”), the Centre Court had seen the best players of all time competing for the title. After the US Open switched to clay and then hard court in the 1970s, and after the Australian Open switched to hard court in 1988, Wimbledon remained the only Grand Slam tournament to be played on grass — a surface that is usually more suitable for serve-and-volley players. Not only did Wimbledon keep its surface, but it also maintained old-fashioned traditions such as the white dress code and the fact that the defending champion was always the first to play on the Centre Court.

In 2012, despite his game style which many deemed not fit for grass-court tennis, Rafael Nadal was on the favourites when Wimbledon started. Since 2005 and a second-round loss to Gilles Muller, the King of Clay had also been one of the best players on grass, reaching the final at the All England Club in 2006 and 2007 (lost to Federer), triumphing in 2008 and 2010, before finishing runner-up to Novak Djokovic in 2011. The Bull of Manacor had participated in the last four Grand Slam finals, and after a great clay-court season, he was a serious contender for world No 1.

In the first round, Nadal easily defeated another lefty, Thomaz Belluci, from Brazil (7-6, 6-2, 6-3), and when he entered the Center Court to face world No 100, Lukas Rosol, in the second round, no one thought the Czech could be any threat for last year’s runner-up. However, Rosol boldly took his chances, displaying a high-risk game to deprive Nadal of the long rallies that the Spaniard needed to find his pace. The Czech obtained a set point at 6-5, but when Nadal saved it with an ace and took the set (7-6), most of the spectators probably thought that Rosol was going to collapse after having been on fire.

Rosol didn’t collapse. On the contrary, he broke Nadal’s serve early in the second set and kept controlling the rallies by permanently taking the initiative. He knew that if he wanted to beat Nadal, he had to cut the rallies short and to play as aggressively as he could. Suddenly, it looked like a major upset could actually happen — a possibility that was confirmed when Rosol won the second and third set (6-4, 6-4).

Nadal kept fighting, and in the fourth set, he seemed to have found his pace. The Spaniard regained control of the match, taking the set 6-2 to push Rosol into a dangerous decider. However, Nadal’s momentum was broken by the organisers’ decision to close the roof — which stopped the match for 40 minutes. When play resumed, Rosol was unstoppable. He broke Nadal early and, winning 95 percent of the points on his first serve, he held his serve until the end. The Czech won the last game to love with three aces and a forehand winner.

“I was just like somewhere else,” Rosol said about the fifth set, according to The New York Times. “I mean maybe it’s once in life you can play like this against Rafael Nadal on Centre Court, and you can win against him.”

Nadal, although obviously shattered by his opponent’s performance and not very happy about the decision to close the roof, tried to hide his disappointment in the press conference.

“Is not a tragedy; it’s only a tennis match,” he said. “When an opponent plays like he wanted to play in the fifth, you are in his hands.

Lukas Rosol would be defeated by Philip Kohlschreiber in the following round (6-2, 6-3, 7-6). The performance against Nadal would remain the highlight of his career in singles. The Czech would still claim two titles (in Bucharest in 2013, and in Winston-Salem in 2014), which would allow him to climb as high as world No 26 in 2014.