Ashleigh Barty advances to her second Grand Slam final with a straight-set victory over Angelique Kerber on Thursday at Wimbledon. Barty awaits either Aryna Sabalenka or Karolina Pliskova. 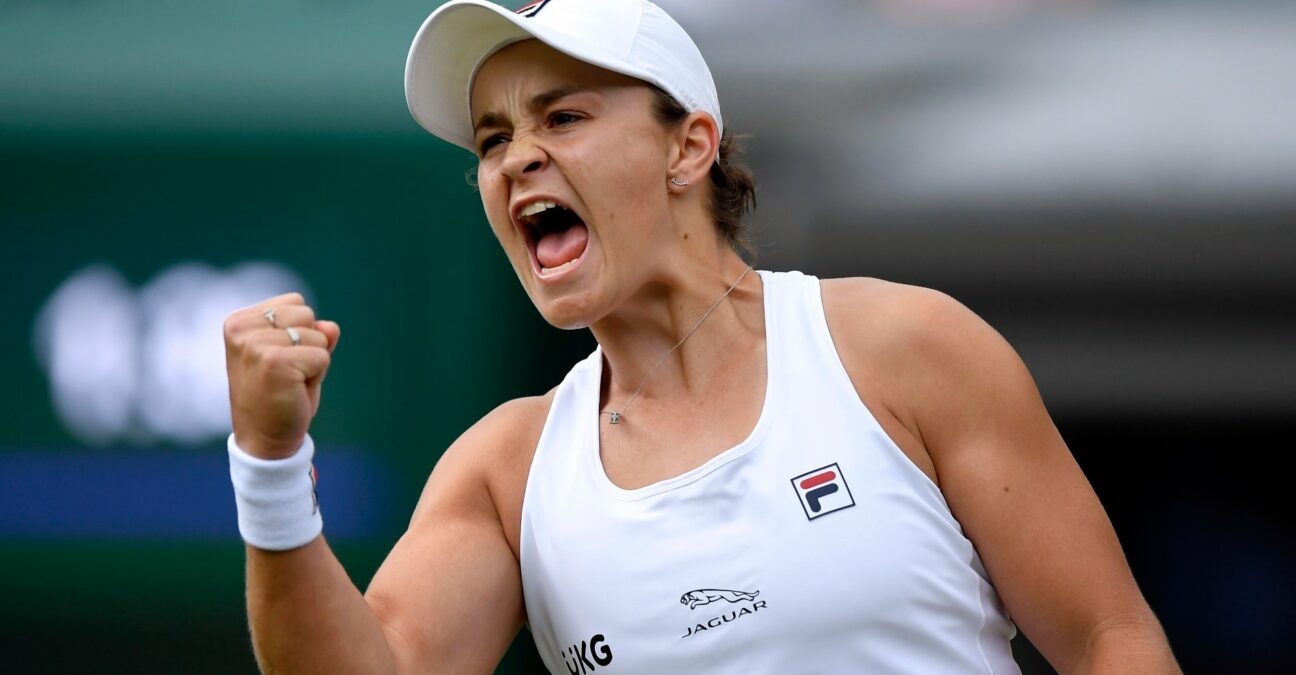 World No 1 Ashleigh Barty is the first woman through to the 2021 Wimbledon final after she defeated Angelique Kerber 6-3, 7-6(3) in the semis on Thursday afternoon. Barty struck eight aces and won 88 percent of her first-serve points to advance in one hour and 27 minutes.

A No 1 vs. No 2 championship match is possible, as second-seeded Aryna Sabalenka is facing Karolina Pliskova in the second semi-final.

For now, though, Barty is surely just happy to be in the final because it was not easy against Kerber. A former Wimbledon champion (2018), Kerber resurrected her game this summer with a title in Bad Homburg followed by five victories at the All-England Club. The 33-year-old played well again on Thursday and looked like she would at least snag one set if not pull off the outright upset. After just one break of serve decided the opening set, Kerber hit back in the second with a quick scalp of Barty’s serve. That propelled the No 25 seed to a 5-2 advantage, on the verge of forcing a decider.

With the pressure on, however, Barty raised her level. Two holds sandwiched around a crucial service break took the top-seeded Aussie to 5-5 and she eventually forced a tiebreaker. Six flawless points gave Barty a 6-0 advantage before she capitalized on her fourth match point at 6-3.

“I think she played really well today,” Kerber praised. “I think we both played on a good and high level. I think we both give everything we could on court today. I was trying to playing my game. But she had always a good answer…. Yeah, she played great in important moments. I think that was the key at the end.

“I think it was at the end just only two, three points which change the game. She was able to go for it; she risked it in the important moments when she was down.”

This is as close to as good a tennis match as I’ll ever play.

“This is incredible,” Barty said during her on-court interview. “This is as close to as good a tennis match as I’ll ever play. It was a hell of a match right from the first ball. Now I get a chance on Saturday to live out a childhood dream…. Playing in front of a crowd like this on this beautiful court, there’s absolutely nothing better.”

As the 25-year-old indicated, there was nothing better than her tennis on Thursday. It wasn’t only her serve that was working. She finished with an incredible ratio of 38 winners to only 16 unforced errors while winning an efficient 10 of 14 net points.

Barty will be playing in her second slam final — her first since winning the 2019 French Open.