Every day, Tennis Majors looks back at the biggest moments in tennis history. On February 6, 1995, Aranxta Sanchez Vicario became only the seventh woman to top the WTA world rankings 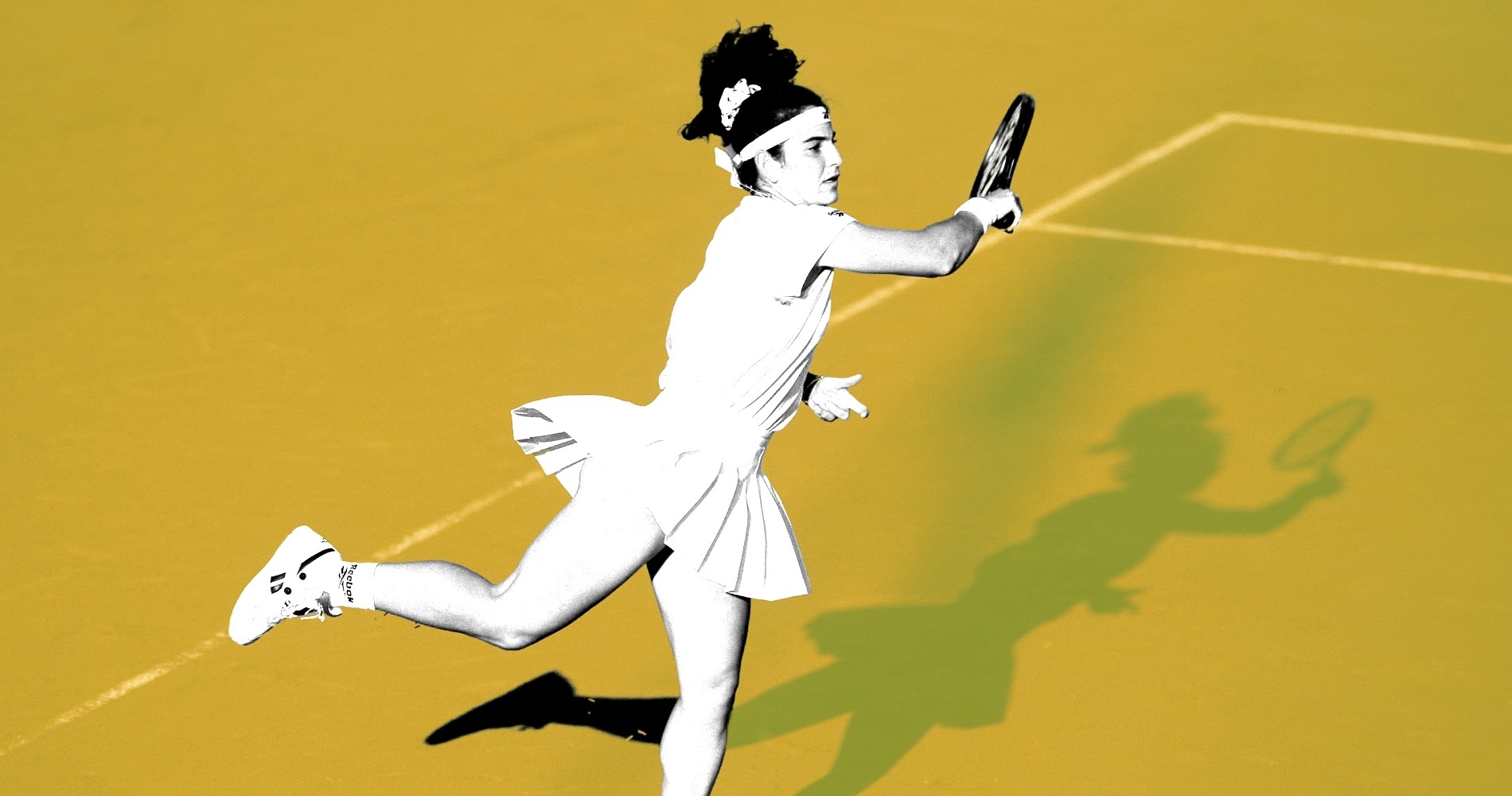 Arantxa Sanchez, On this day, February 6

On this day, February 6, 1995, one week after having reached the Australian Open final, Arantxa Sanchez Vicario became the seventh world No 1 in WTA history. The Spaniard had claimed two of her three Grand Slam titles in the past 12 months, having triumphed at both Roland-Garros and the US Open. She would hold the top ranking for only 12 weeks before, in June, Steffi Graf reclaimed it for 94 consecutive weeks.

Arantxa Sanchez-Vicario, from Spain, was born in 1971 into a family of tennis players: her older brothers, Emilio and Javier, both became professional players as well. With tennis running in her blood, she reached the quarter-finals of the first Grand Slam main draw that she entered, at the age of 15, at the 1987 French Open (defeated by Gabriela Sabatini, 6-4, 6-0).

In 1988, she claimed her first WTA title, in Brussels, defeating Rafaella Reggi in the final (6-0, 7-5), and finished the year as world No 18. Her game, relying on a great footwork, baseline consistency and amazing defensive skills, was more successful on clay, and in 1989, she reached the Roland-Garros final, where, to general astonishment, she beat the undisputed world No 1, Steffi Graf (7-6, 3-6, 7-5).

Thanks to that feat, she climbed as high as world No 4 a few months later. After a disappointing 1990 season, she became one of the dominant players on the Tour, and after Monica Seles was stabbed in April 1993, she became the second-best player in the world, behind Graf. She reached the semi-finals of seven Grand Slam tournaments, and she finished three times runner-up (defeated by Seles at the 1991 French Open and the 1992 US Open, then by Graf at the 1994 Australian Open), before she could lift a second major trophy, at Roland-Garros, in 1994, when she beat Mary Pierce in the final (6-4, 6-4). A few months later, she won the US Open for the first time, prevailing against Graf despite being crushed in the first set (1-6, 7-6, 6-4). Sanchez-Vicario was also great at doubles, having claimed four Grand Slam titles and reached world No 1 in 1992.

Mary Pierce was born in 1975 in Montreal, Canada, but, holding French citizenship from her mother, she chose to play for France. The youngest player at the time to make a professional debut, at the age of fourteen years and two months, she became a top player in 1991, when she claimed her first title in Palermo, and finished the year as world No 26. Her early career was impacted by her father’s violent behaviour, which, in 1993, led the WTA to ban him from attending any tournament, and led Mary to request a restrictive order after he threatened her life.

After claiming four other tournaments in the next two years and reaching the quarterfinals at the 1993 Australian Open, Pierce reached the final of the 1994 French Open. Before losing to Arantxa Sanchez (6-4, 6-4), she destroyed the world No 1, Steffi Graf, in the semi-final (6-2, 6-2), delivering one of the most impressive performances in the tournament’s history.

At the start of 1995, Sanchez Vicario was world No 2, behind Graf, but having won two out of the three last Grand Slam tournaments, she was closer than ever to reaching world No 1. When Graf announced that, due to an injury, she had to skip the Australian Open, the experts knew that it was Sanchez’s best opportunity to reach the pinnacle of her sport.

In Melbourne, she seemed unstoppable, as he cruised through her part of the draw without losing a single set before the final, where she faced Pierce, whom she had beaten in the last Roland-Garros final (6-4, 6-4). Although winning the tournament would have made her world No 1 straight away, it was probably not that pressure that prevented her from winning: with Graf being away from the tour, Sanchez-Vicario was already sure to overtake the German the following week, no matter the result. Pierce played flawless tennis in the Australian Open final, defeating the Spaniard in straight sets (6-3, 6-2) and preventing her from becoming No 1 in style.

One week later, on February 6, 1995, without playing in the meantime, Sanchez Vicario officially passed Graf and became world No 1 in singles, three years after having reached the top spot in doubles.
“It is a very special moment when you realise that the day has finally come,’ Sanchez Vicario told a Spanish radio station at the time. ‘To begin with, you just wander around in a daze thinking how incredible it is. I am extremely proud. When you give yourself a goal you try to get there. It has been difficult but I have finally done it and kept my word. It was a dream for me.”

In 2013, interviewed by ESPN, Sanchez Vicario reflected on that particular day. “When you win a Grand Slam, it’s great, but when you become No. 1 … it’s a very select group and it’s an even greater recognition,” she said. “There’s no one ahead of you. I won’t forget those days, either. Very few players have been No. 1 in singles and in doubles.”

What next: Graf regains No 1 spot; Pierce wins French Open

Sanchez Vicario would only win one tournament as world No 1, in Hamburg, where she would beat Magdalena Maleeva in the final (6-4, 6-1). At Roland-Garros, she would be defeated in the final by Graf (7-5, 4-6, 6-0), who would reclaim the top spot at the same time. Sanchez Vicario, having spent 12 weeks at the pinnacle of the tennis world, would never be world No 1 again. Beaten by Graf in three other Grand Slam finals (Wimbledon 1995, Roland-Garros and Wimbledon in 1996), she would claim a fourth major crown in 1998, defeating Seles in the Roland-Garros final (7-6, 0-6, 6-2). It would be her last appearance in a Grand Slam final. She would obtain her last remarkable result at the 2000 French Open, defeated in the semi-finals by Conchita Martinez (6-1, 6-2), and, progressively declining, she would retire in 2002.

In 2000, Mary Pierce would make the dream of any French player come true by triumphing at Roland-Garros, defeating Conchita Martinez in the final (6-2, 7-5), claiming the title in doubles at the same time, partnering Martina Hingis. In her career, she would reach three other Grand Slam finals, at the 1997 Australian Open (lost to Martina Hingis), at the 2005 French Open (lost to Justine Henin) and at the 2005 US Open (lost to Kim Clijsters). At the end of 2006, she ruptured her anterior cruciate ligament in her left knee, while playing against Vera Zvonareva in Linz, and she would never recover from it. This would remain her last match, although Mary Pierce would never officially announce her retirement. 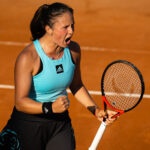 Qinwen Zheng benefited from the retirement of Alize Cornet (6-0, 3-0) on Saturday... 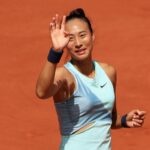 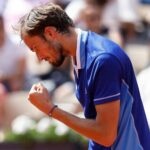 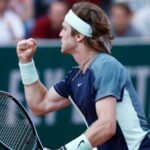 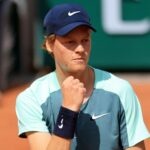