In her second main draw appearance at Cincinnati, the Swiss wildcard has reached the final

Wildcard Jil Teichmann took out another seed at the Western and Southern Open – eliminating fifth seed Karolina Pliskova 6-2, 6-4 in their first-ever tour meeting to reach her first-ever WTA 1000 final.

Teichmann had already beaten Olympic champion Belinda Bencic in straight sets in the quarter-final, and knocked out second seed Naomi Osaka in the round of 16.

The 24-year-old will now play world No 1 Ash Barty for the title. 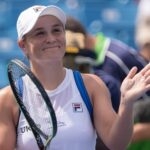 The Swiss had a great hard-court swing earlier in the year, when she reached the latter stages of three consecutive tournaments – the quarter-final of the Phillip Island Trophy, followed by semi-finals at Adelaide and then Dubai.

Teichmann has enjoyed a great week in Cincinnati, and this is now the first time since Dubai that she has managed to string together back-to-back victories.

With this win over the Czech she records the fifth Top 10 win of her career – four of which have come this year.

Pliskova will have to wait a little longer for her first title of 2021 – but will be reassured that she will stay put as world No 4 for the time being.