With not many points to defend during the next two months, the Russian is looking ahead to clay-court season to climb up the ranks 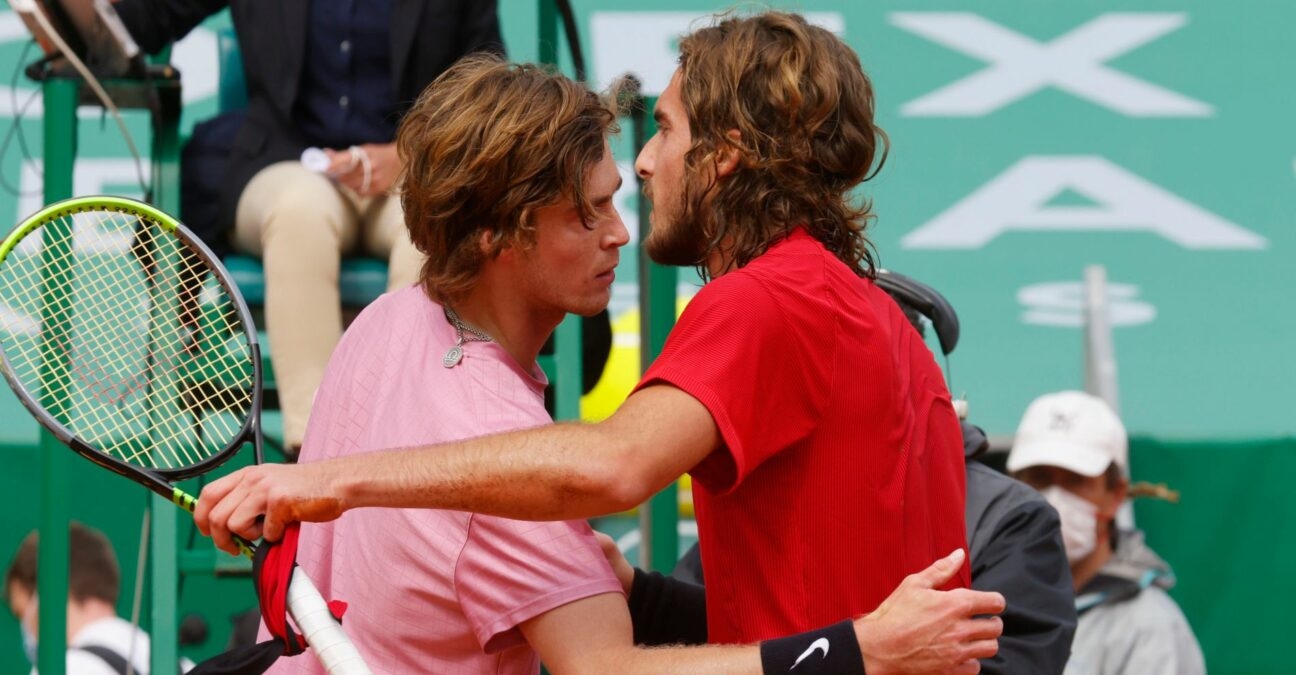 Monte-Carlo Masters runner-up Andrey Rublev claimed he felt mixed emotions after losing the final to Stefanos Tsitsipas. The Russian said that while he was super sad to lose on Sunday, he was still happy about the overall week he had, which resulted in reaching his first ATP Masters 1000 series final.

After scoring wins over Roberto Bautista Agut and Rafael Nadal, Andrey Rublev was defeated by Tsitsipas 6-3, 6-3 in one hour and 11 minutes in the final, and is now 24-5 for the season – leading the ATP Tour for most wins by a player in 2021.

The Russian climbed one spot to a new career-high ranking of No 7 in the world and is now ranked second in the Race to Turin, just 140 points behind Tsitsipas.

“I feel both things. I feel happy with the week, and I feel super sad with the final, that I couldn’t show the game, I couldn’t show fight, yeah, I didn’t win,” Rublev told the press after the final. “But, of course, I’m happy with the week because I beat so many great players. I beat one of the best players in history. So, of course, anyway it’s a special week. Doesn’t matter the final.”

“But still, of course, even more after the matches like this, you want to win the title. Not always everything goes by your way. It’s happen today. I was completely exhausted. Stefanos, he showed great game. He was just better than me, and that’s it.”

Despite the long week in Monte-Carlo, the Russian will now head to Barcelona for the ATP 500 series Barcelona Open this week.

The Russian admitted that he only decided to take a last-minute wild card into the tournament on Friday, just prior to his quarter-final match against Nadal since he was expecting to lose against the 11-time Monte-Carlo champion.

“I mean, when I confirmed to play Barcelona, it was right before match with Rafa (smiling). I was thinking in my head that Friday probably I will be already in Barcelona,” Rublev added. “But, I mean, I think I can play on Wednesday, so I have like two days off, which is more than enough. We’ll see how I will feel. Yeah, I think everything is going to be okay because two days is more than enough to be ready. Then I’m not playing nothing, I have only Masters.”

Also Read – Monte-Carlo champion Tsitsipas: “This is just the beginning”

“Nothing to defend” – Russian looks ahead to the clay season

The Russian added that he is looking forward to the rest of the clay-court season as he does not have too many points to defend until the French major. Rublev is defending only 45 points from the Rome Masters (round of 32 in 2019) and 360 points from Roland-Garros (quarter-finals in 2020) in the next two months and sees this as a good opportunity to earn more ranking points.

“I mean, it’s my first tournament on clay and I did already final, my first final on Masters. It’s a great beginning. We’ll see. I hope I can show great game every week. We’ll see what’s going to happen. Now I have great opportunity because last two years I was injured during the clay court season, so I have nothing to defend. I have only big way to earn points. I will try to do my best.”