Tennis Majors > ATP > Daniil Medvedev’s clay woes continue: “You like to be in the dirt like a dog?”

Daniil Medvedev’s clay-court woes continued in earnest in Rome on Wednesday. The Russian fell to Aslan Karatsev but kept the match interesting with his own brand of comedy gold. 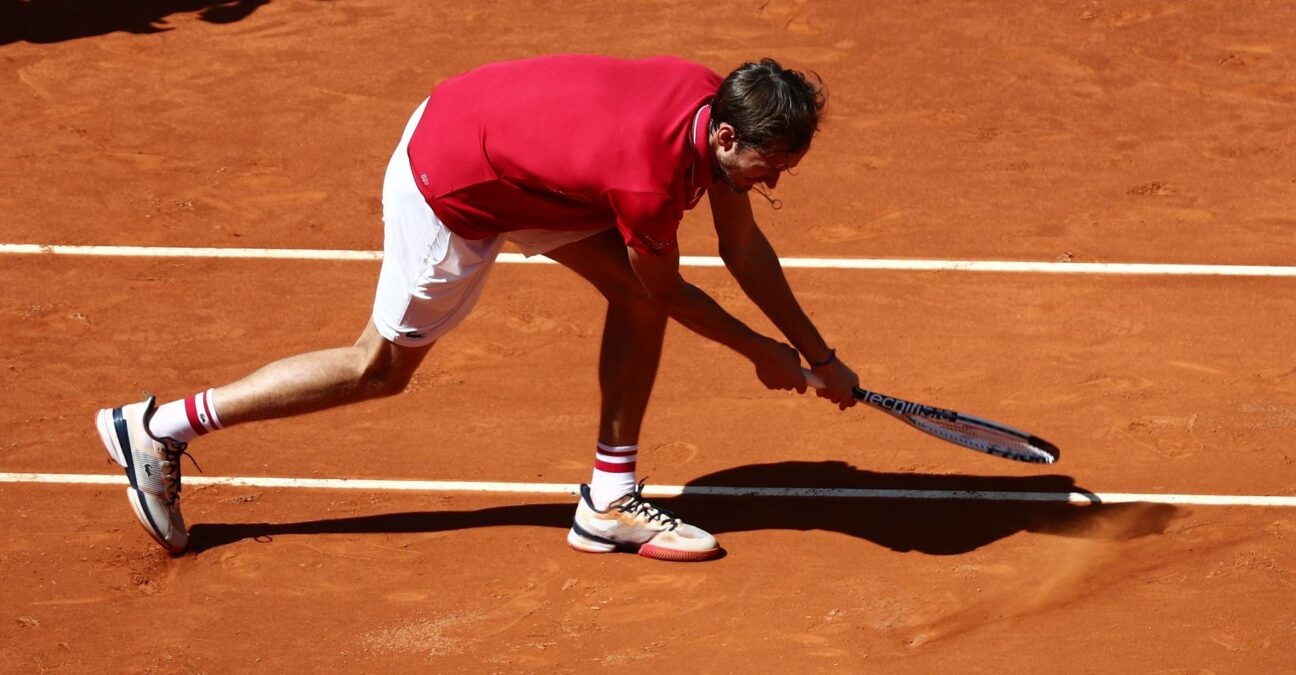 Russia’s Daniil Medvedev is trying to accomplish one of the most difficult feats in tennis: winning on a surface which he absolutely detests. Today, the world No 2 compared his travails on the red clay of Rome to being a dog in the dirt as he ranted his way to another dispiriting loss on the clay, 6-2, 6-4 to Aslan Karatsev.

At times absurd, at other times just plain hilarious, Medvedev was missing a key ingredient for success on tennis’ most grueling surface: determination.

Of course his opponent, the red-hot Russian who has become one of the biggest – if not the biggest – story of the 2021 ATP season, made things extremely difficult on Medvedev. Karatsev played some excellent tennis on Wednesday to earn his fifth top 10 win of the season and improve to 21-6 overall in 2021. As he has been often this season, he was simply too tough to handle, and when Medvedev wasn’t rewarded for his efforts he started to melt down.

“You like to be in the dirt like a dog?” Medvedev muttered to himself, while sitting at his chair during a changeover and trailing 6-2, 4-3. “It’s okay, I don’t judge.”

A game later, with his fortunes turning ever worse, Medvedev had more comedy to deliver:

“Mamma mia Sante Italia, ball abuse,” he yelled, to no one in particular, as his compatriot Andrey Rublev couldn’t help but laugh from his spot in the bleachers.

It was a rant that would not stop until the bitter end.

“What did I do wrong last game, guys?” he said as he headed back to his baseline after another changeover, a game away from defeat. “What can I do? I play good but no chance on this surface.”

At one point, Medvedev turned to ATP supervisor Gerry Armstrong and asked him to disqualify him.

“Gerry please, disqualify me,” he said. “I don’t want to be here. It’s dangerous for everybody.”

Though the humour took centre stage on Wednesday in Rome, at the heart of the matter is an important issue for the 25-year-old. There are three Masters 1000 events and Roland-Garros on clay each season, and if Medvedev is interested in claiming the ATP’s No 1 ranking at any point in his career, he’ll need to find a way to capture some of them.

With today’s loss, the Russian drops to 11-20 lifetime on clay, an unacceptable winning percentage on the surface for a player with designs on the No 1 ranking.

Cervara: “He has a lot of room for improvement on clay”

In an exclusive with Tennis Majors before the Madrid Open, Medvedev’s coach Gilles Cervara talked about the struggles his charge experiences on clay.

“He has a lot of room for improvement on clay,” he said. “He’s never won a match at Roland Garros. We’ve been seen joking about it before, which is good for not letting the pressure get to us, but I don’t feel like joking much anymore.”

Cervara knows that his player has the level and the big-match mentality to defeat the world’s top players. His challenge now is to get Medvedev to block out his frustration and start to believe that he can succeed on the clay. Clearly it is easier said than done.

“Daniil is there,” he said. “But clearly not on clay. He still has to go through a lot of stages, the same ones he went through to get to this level on hard courts and indoors.”

Medvedev, who has never won a match at Roland-Garros (0-4) or Rome (0-3), will next prepare for Roland-Garros, where he will be the No 2 seed. The Russian clearly has his work cut out for him, but his biggest challenge might be to keep his mind wandering to the grass, where his chances to rack up some wins will be far greater this summer.