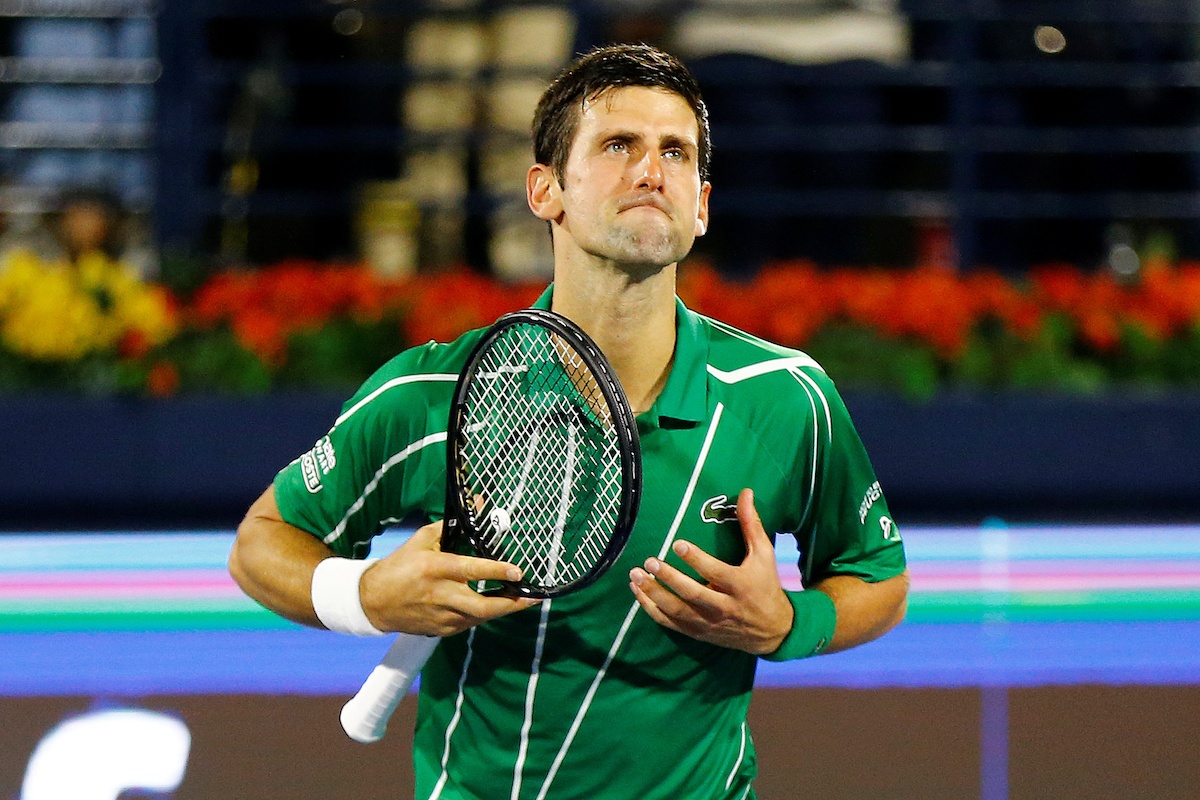 From the boss, with love. That could be the message given by Novak Djokovic to the rest of the Tour since the start of the season, after he clinched his 21st wins in a row of the year by beating Stefanos Tsitsipas (6-3, 6-4). The Serbian got his third title 5th title in Dubai, his third of the year, his 79th career titles, and also his 7th win of the year over a member of the Top 10. Did you just say world domination? The worst news for his rivals is that on Saturday during the final, he didn’t play his best, he wasn’t on his “cosmic” tennis at all: but his average game is so strong that again it helped him hang in there until on a few games and a few shots, his highest level was ready to show up.

Struggling on his service games in the first set, he kept battling it out, finding solutions to the very solid game plan Tsitsipas was offering. And on one shot, he won that set: an absolute wonder of cross-court backhand passing shot. Baseball-like. Unplayable. Tsitsipas’ serve was broken and his soul too as suddenly “Nole” was up 6-3, 3-1, rolling.

But the Greek has guts and a big heart so he fought back in a very smart way: showing more patience in the rallyes, putting more topspin in his shots to prevent Djokovic from putting the PlayStation mode on. That’s how he came back to 3-3. The Djoker, as from the start of the match, started to give some signs of fatigue here and there, started to make us wonder if the massive fight against Monfils on Friday had left some scars. But again he calmed down and fund the way: some big serves to stay in the second set at 4-4 and then an impossible-to-retrieve backhand drop shot to get the break. Like a magician, with just a few tricks and total control of his art, he had the trophy in the hands a game later.

Tsitsipas, now down 3-2 in their head-to-head, wasn’t that far at all and he proved again he had the weapons to disturb the World No. 1 but he couldn’t find the demanding consistency required to get two sets out this man. It’s a focus work, it’s something about sticking to the game plan, about not giving Djokovic an inch of ground that is so extraordinarily difficult to do point after point. Like last year, Tsitsipas wins Marseille and loses in the final of Dubai: he’ll say it’s a mixed result but it mostly proves how strong that guy is now at keeping his best level once he finds it. “Keep failing until you make it, I guess”, he said on the court. “It’s a loop of constant repetition, trying to get better, trying to learn from your mistakes.” He’s getting there, but in 2020, for now, Djokovic keeps closing the door on anyone else’s hopes!

Asked what was his target now for the year, Djokovic paused and grinned before saying: “To go unbeaten the whole season… No, I’m kidding… No, I’m not kidding actually…” It’d sound crazy for many, but with this one who knows? His insane run of 2011 is still in everyone’s memory. And this 21st wins of 2020 represents the 7th-best winning streak of his career.

But at now 32 years old and as he’s going to spend his 280th wins as No1, surely he’s not going to forget what his goals really are: the Grand Slam titles record and the weeks in the throne record. In Dubai, as he’s going to try to do in Indian Wells and Miami, he’s mostly gaining lots of confidence and putting lots of fear in his rivals’ brains. For now, the plan is picture-perfect for Djokovic.