Jannik Sinner’s is constantly searching for ways to become the best player he can be, even if the result isn’t apparent on the court, the work is being done.

When you are still a teenager and already an elite professional, there is nothing but time to grow the game, but 19-year-old Italian standout Jannik Sinner is in no mood to passively wait around for success to happn. He’s chasing it, and working extremely hard to rediscover his winning ways after a dry spell that saw him go winless from his loss to Rafael Nadal in the round of 16 at Roland-Garros all the way to his second-round win at the Citi Open, over Emil Ruusuvuori of Finland. 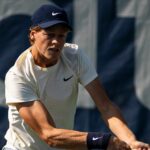 That type of stretch is not something that Sinner, raked 24 and seeded No 5 at the US Open, takes lightly. He even made the tough decision to skip the Olympics to work on perceived weaknesses in his game.

What did he work on, specifically?

Sinner says the work hasn’t translated to match play – at least not yet. But he believes it will.

“I don’t think it’s paying off immediately, to be honest,” he said. “It takes time. It takes a lot of matches. But, you know, I have been working very hard physically, I would say. Obviously tennis-wise, I mean, you play every day. You learn something. But physically we were pushing quite hard.”

Doubles helping his comfort at net, and serve

Sinner has reached the doubles semi-final at the Citi Open as well, and he says he enjoys playing with young partners like Sebastian Korda (this week at Citi Open) and Reilly Opelka (last week at Atlanta) for the social aspect. But Sinner says that there are other positives to take away, from a tennis perspective.

“I think, you know, when you’re feeling confidence with your partner, it makes things much easier, I would say. You know, I have fun playing doubles with the young guy, you know, like Korda. I have fun. We talk. The same thing with Opelka. He’s young. We talk. Yeah, it’s enjoyable.

“As I said, for me it’s more important to serve 40-All when there is under pressure than going on practice courts and serve 100 balls. It’s different. So I think this helps for singles players as well.”

Next challenge? American Jenson Brooksby in the Citi Open semi-finals

Sinner will face American wild card Jenson Brooksby, a player that has raised many eyebrows with his superb run to the last four in Washington, D.C, in a heavily anticipated last four matchup on Saturday. The Italian knows he will have to be ready for a stiff challenge against an unconventional player that is a rising force. 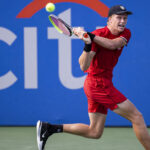 Read also
20-year-old American Jenson Brooksby has been a revelation at Citi Open, and Andy Murray is on his bandwagon
Tennis Majors

Sinner says he will have to accept a certain level of unfamiliarity with Brooksby’s game, given that he has never practiced with him.

“I don’t know exactly how he plays. We never practiced together. We didn’t spoke so much. I mean, just “hi” and “how are you” around the locker room. Yeah, I think it’s going to be a very interesting match, a very tough match. He puts a lot of balls in the court. It’s very, maybe it’s going to be physical.”