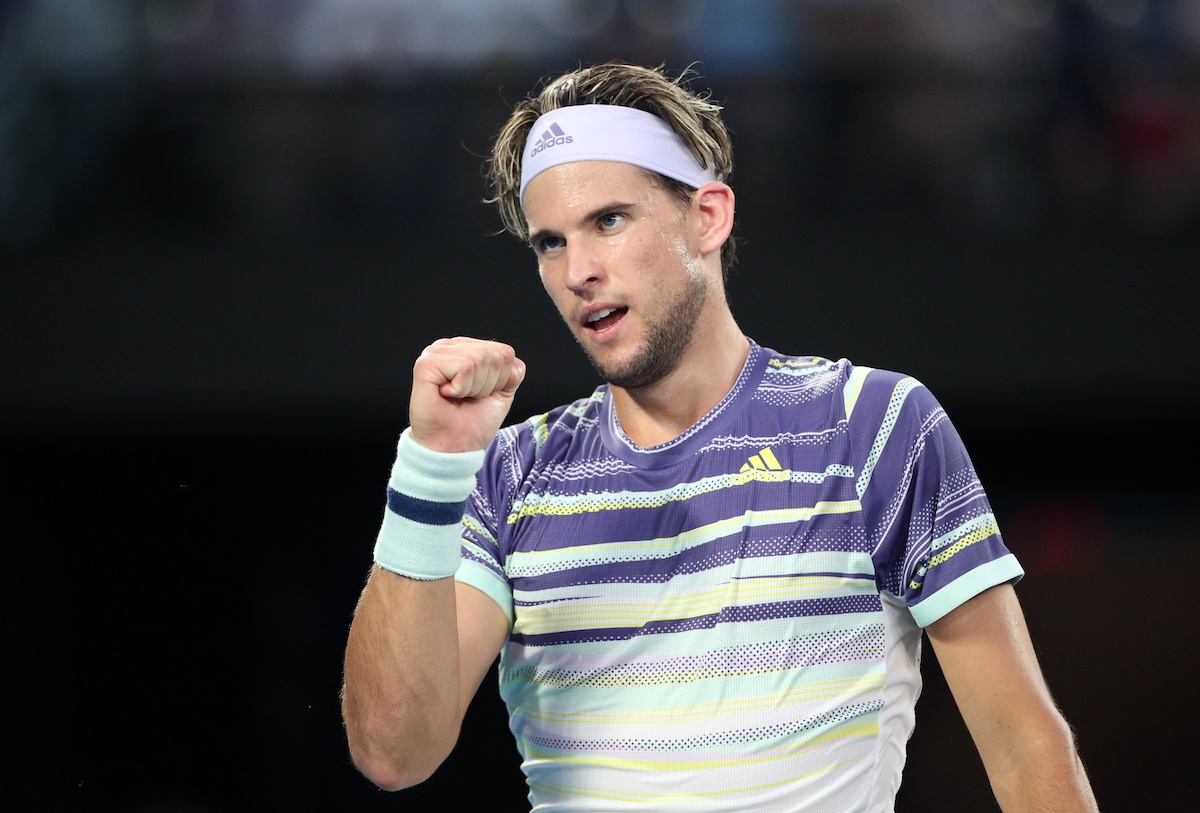 Dominic Thiem reacts during his semi-final match against Alexander Zverev

Dominic Thiem set up an Australian Open final showdown with Novak Djokovic courtesy of a thrilling four-set win over Alexander Zverev on Friday.

The Austrian moved into his third grand slam decider by getting past Zverev 3-6 6-4 7-6 (7-3) 7-6 (7-4) in an entertaining semi-final played almost entirely under the Rod Laver Arena roof.

Thiem, 26, needed three hours and 42 minutes to overcome Zverev and reach a first major final away from the French Open.

Playing his first semi-final at a grand slam, Zverev, 22, put up a huge fight in a gruelling baseline battle in warm conditions.

However, the German fell to a seventh loss in nine meetings with his good friend Thiem, who backed up his outstanding last-eight win over world number one Rafael Nadal to set up a clash with Djokovic on Sunday.

Showing some signs of early nerves, the players traded breaks in the opening two games as they tried to settle from the baseline.

The Rod Laver Arena roof was closed during the fourth game as rain fell in Melbourne, before Zverev – who had made the steadier start – took a 4-3 lead when Thiem put a forehand wide on break point.

Zverev impressively consolidated to love and broke again to take the opener, Thiem sending a backhand halfway up the net for his 13th unforced error of the set.

It was Zverev who was wayward to begin the second set, although he would initially recover from a break down in part thanks to a ripping cross-court return winner in the sixth game.

However, Thiem restored his advantage to go 4-3 up in a game that included a fortunate net cord before closing out the set in a 10th game that brought the crowd to life.

Zverev returned a Thiem overhead with one of his own for a winner and the Austrian missed another overhead into the bottom of the net, but he would level the match after saving two break points.

The pair had spectators on their feet again in the fifth game of the third set – briefly delayed due to an issue with the lights – after a thrilling point that featured a diving volley from Thiem, who was up by a break and talked his friend into a successful challenge that led to a tough hold.

He may have been regretting that decision when Zverev broke back in the following game and twice held set points in the 10th, both saved by Thiem winners, one from either wing.

Zverev, who had pledged to donate his entire prize money to the Australian bushfire relief fund if he won the tournament, served well on the way to a tie-break, but it was dominated by Thiem’s brilliance. He began it with a delicate half-volley before firing two winners to end it, taking a two-sets-to-one lead despite appearing to suggest he was feeling unwell.

Both players held serve relatively comfortably through the fourth set as another tie-break followed.

Zverev then produced a nervy double fault, the second serve missing by a long way, early in the tie-break and a wild overhead miss, Thiem’s aggression eventually paying off to book his spot in the final.