She Sang. She Danced. She Boxed. In Pursuit of Her Elusive 24th Grand Slam, Serena Williams Is Leaving No Stone Unturned. 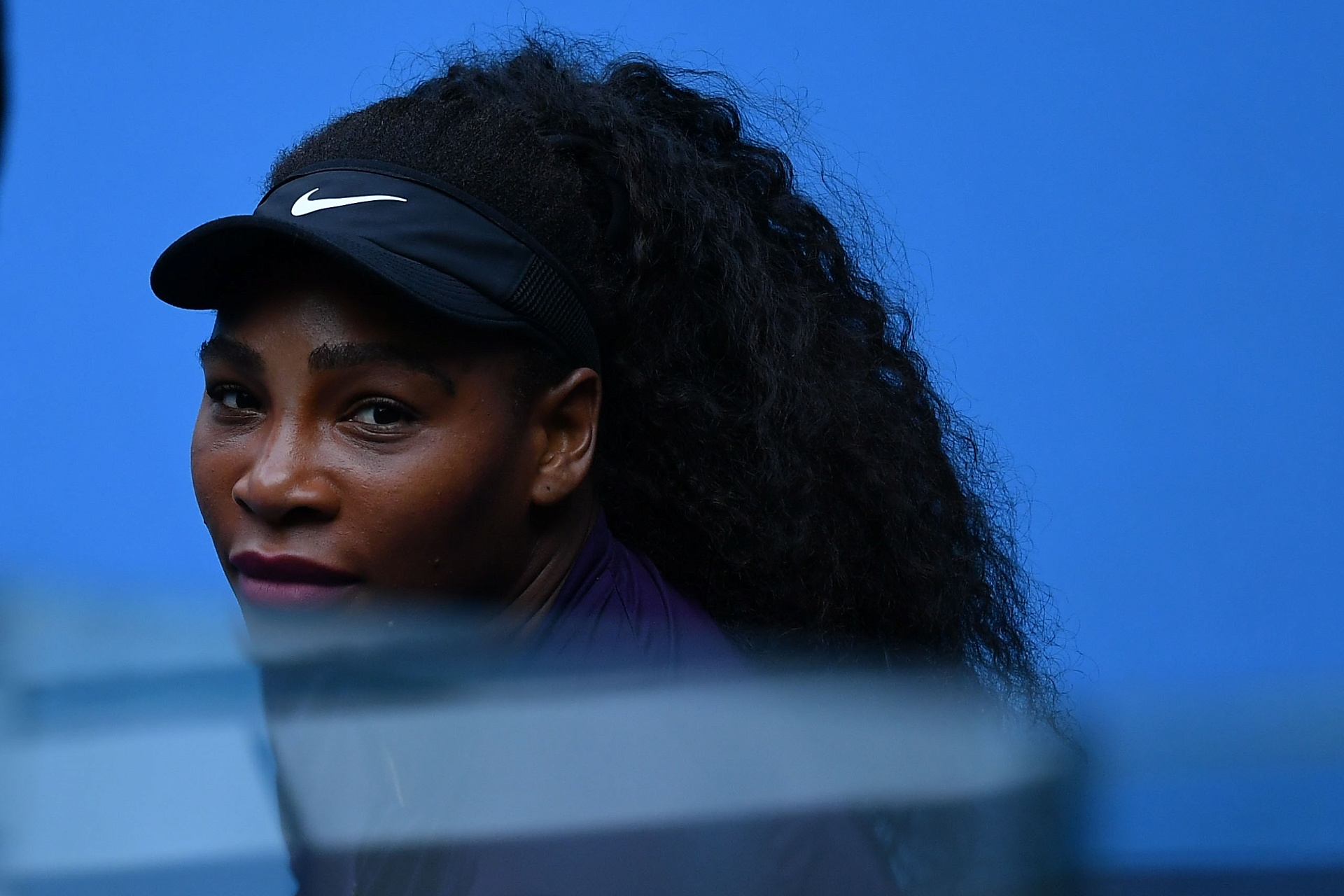 Serena Williams is trying to win a 24th Grand Slam.

To try and shoulder the burden of history she’s been dealing with since coming within one title of a record-tying 24th Grand Slam, Serena Williams took a different approach this offseason. Less of the same old routine; more fun, with an emphasis on fitness.

The main headliner for Patrick Mouratoglou’s preseason cast, along with 15-year-old wonderkid Coco Gauff and 16-year-old junior world No. 1 Holger Rune (who both weren’t born when she completed the non-calendar Grand Slam over 2002 and 2003), Serena Williams enthusiastically participated in all the group’s team-building activities, tearing successively into the role of a gym freak, a cyclist, a distance runner, a boxer, a singer and a dancer — in addition to that of a tennis player every morning.

She kicked off her preseason by taking part in an exclusive ‘Insanity’ cardio session organized by American fitness guru Shaun T before posing for photographers, all smiles, with Coco Gauff and DJ Bob Sinclar. 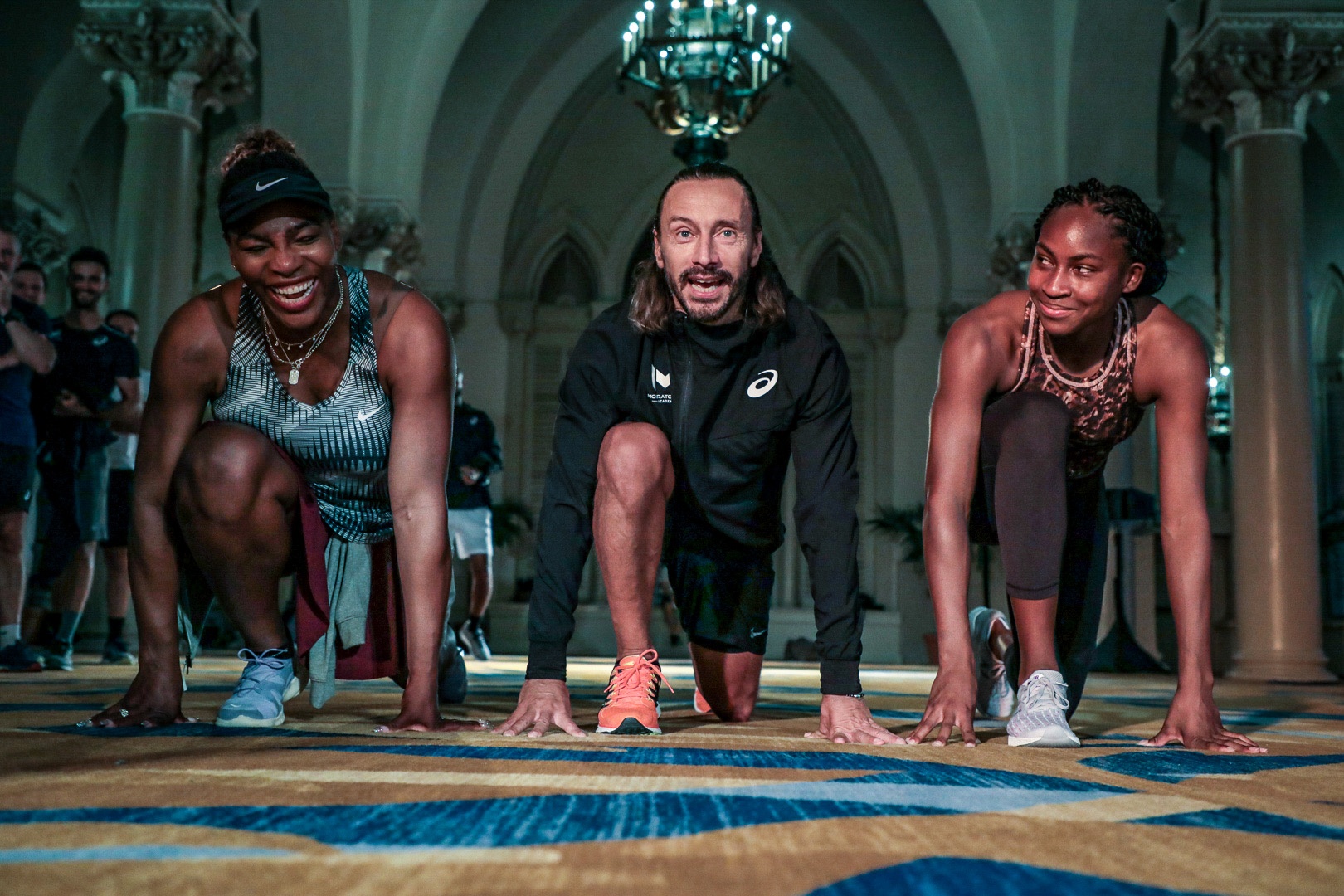 A couple days later, when Mouratoglou texted her she would get to practice with Holger Rune the next morning, for a change, she immediately sent him back a 15-second video where she essentially said she was “so excited to hit with the best junior in the world.”

She effectively demonstrated it on the court, keeping up with the Dane’s heavy groundstrokes and putting out one of her best practices of the ten-day camp.

Holger and Serena were so hot off the backhand side, we had to cool down our iPhone (Swipe )

Next on the schedule was a giant scavenger hunt around the Boca Raton Resort for which Williams teamed up with Chris Eubanks, her regular hitting partner Jarmere Jenkins and his girlfriend. They took first place in the seven-team contest, having found the seven required envelopes then kayaked their way to victory ahead of the other two ‘Superteams’ — Patrick Mouratoglou, Victoria Azarenka and Mouratoglou Academy head coach Kerei Abakar (second place) and Coco Gauff, Shaun T and his boyfriend (third place). 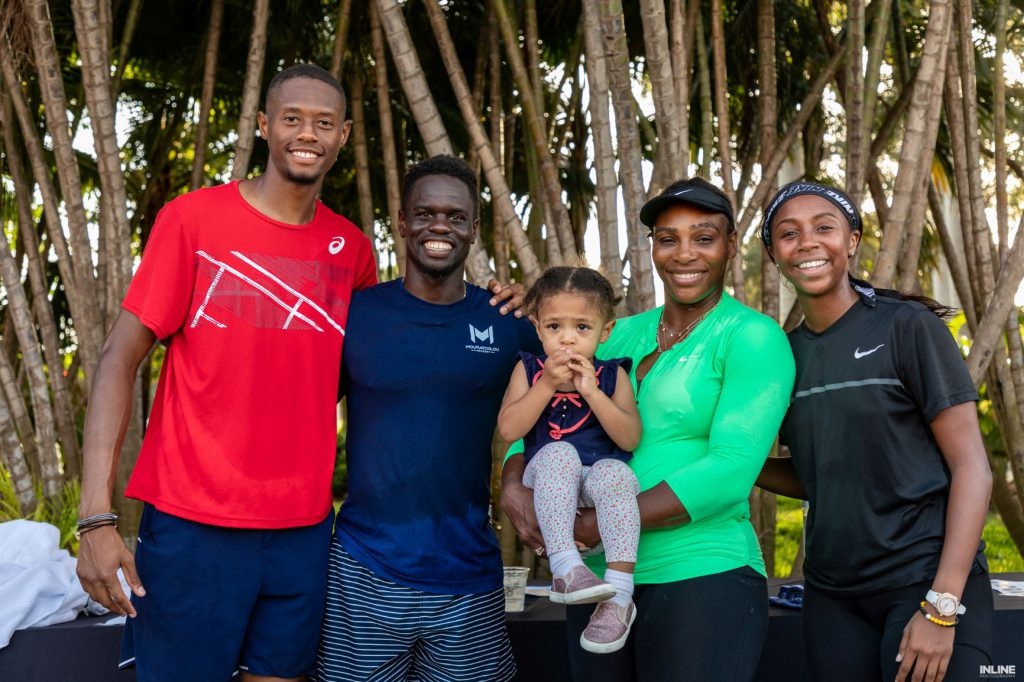 A moment with Mike Tyson

It was the perfect warmup to what would be the main event to the camp’s card: A boxing training with a fellow G.O.A.T., Mike Tyson. “I can’t wait for it — just imagine, Mike and I, this will get so viral!”, she told Patrick Mouratoglou, who had arranged the session.

Viral it got, inevitably: 1.7 million people on Mike Tyson’s Instagram, 1,5 million on Serena’s and nearly 1 million on Bleacher Report’s watched the 23-time Grand Slam champion hit the punching bag ‘like she wanted to hit the ball’, as witfully put by Mouratoglou on his own Instagram.

The one-hour session, directed by a brilliant Tyson in his role of teacher, was a sparkling display of Williams’ abiding love of sports and competition. At its climax, it almost felt like Serena’s single-minded pursuit of Court’s Grand Slam record had stretched over the session and that she was indeed projecting herself into hitting the ball on the Rod Laver Arena next February 1, the day the 2020 Australian Open women’s singles final is scheduled. 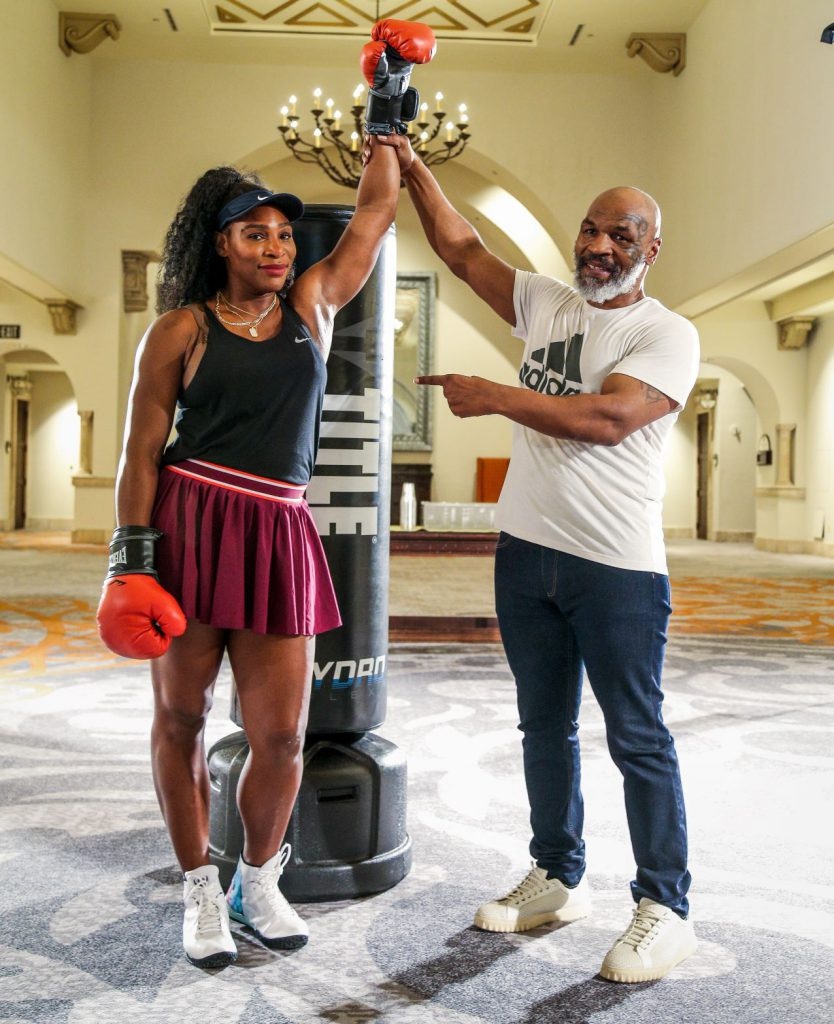 Did she have her three-year Grand Slam drought, the longest of her career since winning her maiden Major in 1999, in mind when she interpreted NSYNC’s ‘Bye, Bye, Bye’ on karaoke night? You never know what goes inside the mind of champions, much less legends, but honestly she looked like she just wanted to have fun, and so she did, sharing the big stage and partying with Victoria Azarenka like it was 2013. 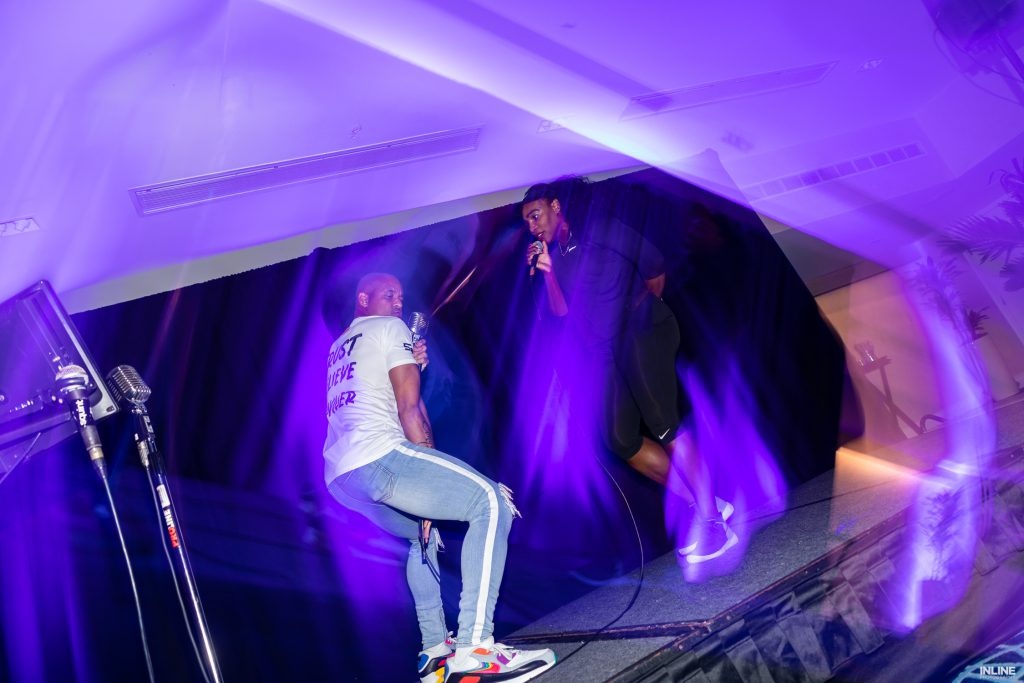 Finally, Serena danced the last night away. On the 25th floor of a luxurious tower, she led the unveiling of an elaborate choreography she had spent several hours rehearsing with Gauff, Eubanks and Shaun T, notably. As she did the splits, every single member of the 50-ish-people audience flashed their smartphones to capture the moment, but it was less a sign of the times than the desire to immortalize that Serena Williams (still) is hardwired for grace under pressure.

Will that be the case when she attempts, in about just two weeks, to write another chapter in her storied legend?

At the very top of the list of Grand Slam women’s singles champions, the air got considerably thinner when Serena Williams won the 2017 Australian Open, her 23th Grand Slam, to come within just one title of Margaret Court’s record.

But so far, the indisputable greatest player of her generation, and arguably greatest of all time, hasn’t been able to catch a single whiff of that elusive 24 Slam magic in the air.

Since overcoming pregnancy complications to pursue a career which wasn’t lacking back-from-the-brink-of-death comebacks, Serena Williams has competed in four Grand Slam finals, and lost all four in comprehensive fashion.

Serena Williams in a Grand Slam championship match once was the surest of sports’ sure things. But after going a staggering 23-6 in the first part of her career, the one where she was routinely and ruthlessly dispatching one final opponent after the other, the one where she wasn’t a mother yet, Williams has been mixing up her usual magnificent runs with unusual bittersweet endings the last two years. Even more troubling is regardless of her opponent’s name being Angelique Kerber, Naomi Osaka, Simona Halep, Bianca Andreescu — it was always, inexplicably, Serena’s shadow on the other side of the net.

“The pressure level [she’s facing] is the highest that I’ve seen”, her long-time coach Patrick Mouratoglou conceded to reporter Reim Abulleil after Williams’ 6-3, 7-5 loss to Andreescu in the 2019 US Open final.

Even higher, really, than when the American came two matches away from achieving the Calendar Grand Slam, in 2015, before losing to 300-1 longshot Roberta Vinci in what Tennis Channel picked as the No. 1 Women’s Match of the 2010s Decade?

Mouratoglou reckons so. “Because she is playing for history and everybody puts her so high, there is even less room for failure. But it’s OK. I think that is the meaning of, ‘pressure is a privilege’. The more pressure you have, it means you’re better than before, the pressure gets higher. So she has achieved much more now than seven years ago. The pressure is much, much higher.” 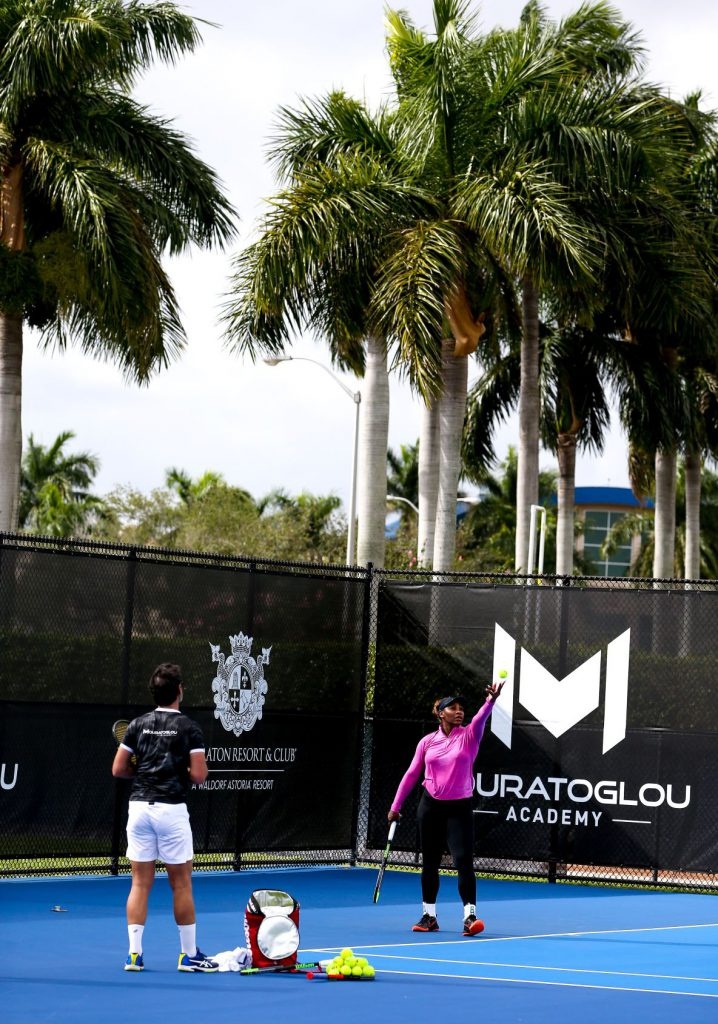 And as the clock keeps moving remorselessly and the prospect of retirement looms larger, especially for someone who wanted journalists to “personally take [her] off and escort [her] off the court” if she was still playing at 38, the burden of tennis history might only increase going forward.

A sunny day in Melbourne ?

The imperative of Serena Jameka Williams’ last task is, simply, the imperative of her life: Fight against the odds from a seemingly impossible position, whether it’s Compton thirty years ago or ageing today.

Woody Allen one said that in sports, you’re never ahead of the dramatist.

While last September was ‘A Rainy Day in New York’, Serena Williams will certainly hope for ‘A Sunny Day in Melbourne’ this February.