Every day, Tennis Majors looks back at the biggest moments in tennis history. On March 13, 1996, world No 1 Thomas Muster was beaten by Adrian Voinea in Indian Wells 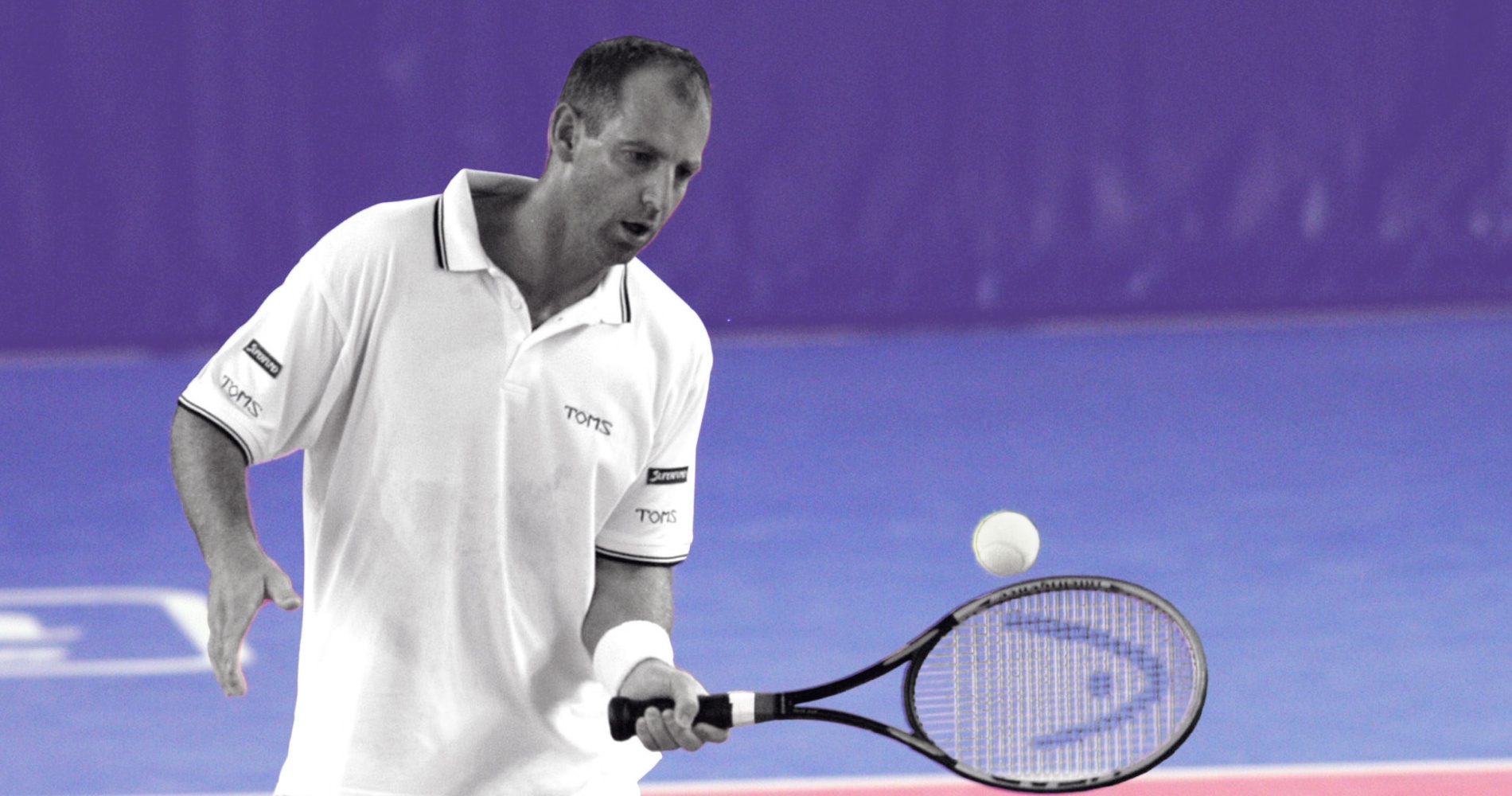 On this day, March 13, 1996, Thomas Muster, who had become world No 1 a few weeks before, was defeated by world No 40, Adrian Voinea (6-3, 7-5), in the first round at Indian Wells. For many players, like Andre Agassi and Pete Sampras, who were already criticising his rise to the top, it was one more reason to claim that the Austrian didn’t deserve to be world No 1.

Thomas Muster was born in 1967. Left-handed, he developed a typical clay court game, with a lot of spin on both sides and great fitness. His tactics relied on long and intense rallies from the baseline, which earned him the nickname “Musterminator”. He won his first title on the tour in 1986, in Hilversum, on red dirt, defeating Jakob Hlasek in the final (6-1, 6-3, 6-3). Although all his titles were claimed on clay until 1990, he had his Grand Slam breakthrough on hard court at the 1989 Australian Open, where he reached the semi-finals (lost to Ivan Lendl, 6-2, 6-4, 5-7, 7-5). That year, just after he beat Yannick Noah in the Miami semi-finals (5-7, 3-6, 6-3, 6-3, 6-2), he was hit by a car and his knee was badly damaged. After surgery, he left a print in tennis history with a picture of him hitting forehands while sitting on a bench with his leg in a cast. It became the very image of resilience. His will to come back paid off and he was back on the tour in 1990, and soon, he reached the semi-finals at Roland-Garros, losing to eventual champion Andres Gomez (7-5, 6-1, 7-5). Despite his first hard-court title in Adelaide (defeating Jimmy Arias in the final, 3-6, 6-2, 7-5), he realised that playing on clay was much better for his knee and he specialised even more, claiming almost all of his titles on his favourite surface. He had notably triumphed at the Italian Open in 1990, and at the Monte Carlo Open in 1992. In 1995, he completed one of the most successful clay-court seasons of all-time: remaining undefeated for 40 consecutive matches on red dirt, triumphing in Estoril, Barcelona, Monte Carlo, Rome and finally at Roland-Garros (defeating Michael Chang in the final, 7-5, 6-2, 6-4). Later that year, he claimed his first Masters 1000 title on indoor carpet, in Essen, defeating Pete Sampras in the semi-finals (7-6, 6-2) and MaliVai Washington in the final (7-6, 2-6, 6-3, 6-4). He finished the season as world No 3, having accumulated no fewer than 12 titles throughout the year. After Sampras was defeated in the third round of the Australian Open, the Austrian became world No 2. Agassi still held the top spot, but he lost his Australian Open title and he was the defending champion in San Jose. However, in 1995, the tournament had been held in the first week of February; in 1996, it was held in the second week. Thus, Agassi was going to lose his points before being able to defend his title. This is how Thomas Muster became world No 1 on February 12, 1996.

The history of the Indian Wells tennis event began in 1987, when the La Quinta tournament, under the impulse of Charlie Pasarell, outgrew its premises and had to move into a bigger location, without leaving California. The tournament had already become prestigious in La Quinta, but when it settled down in Indian Wells, it became a part of the Grand Prix circuit and its first edition, known as the Pilot Pen Classic, had seen a great final where Boris Becker defeated his rival, Stefan Edberg (6-4, 6-4, 7-5). In 1993, the tournament became a part of the Super 9 category, which would later become the Masters Series, then the Masters 1000. In the middle of the 1990s, it was one of the most important tournaments outside of the Grand Slams.

In 1996, when Indian Wells began, Thomas Muster had just reclaimed the world No 1 spot from Pete Sampras, on March 11. The Austrian had reached the top spot for the first time on February 12 but had remained only one week at the top of the rankings. His rise to the top created controversy in the world of tennis, as he had overtaken the two greatest stars at the time, Sampras and Agassi, obtaining most of his results on clay court. On top of that, in his only appearance so far as world No 1, in Dubai, he had lost in the first round against a player ranked outside of the top 100, Sandon Stolle. The two American greats were the first to blow shots at him.
“I feel that Thomas is the best player in the world on clay and as far as him being the best player on anything but clay, I don’t quite swallow that quite as well,” said Sampras, according to The Los Angeles Times. “The way the ranking system is with defending points, and I didn’t do well in Australia, it just so happens he had snuck up and became No 1. It really just comes down to the end of the year…That is the true indication of who the best player in the world is.”
Meanwhile, Agassi said in numerous statements that Muster didn’t deserve to be world No 1.
The Austrian, disappointed by his rivals’ reactions, fought back vigorously.
“I don’t understand why Andre, who is a champion himself and knows what it takes, would say what he did,” he said. “If you want to, you can find anything negative about anyone in the world. (…) This is the system. As I’ve said, it’s not like I’m buying the points at a supermarket.”
It was in this tense climate that Muster played his first-round match against world No 40, Voinea, whom he had easily beaten a few weeks before, in Doha (6-2, 6-2). This time, however, things didn’t work out so well for the 1995 Roland-Garros champion, who lost in straight sets, 6-3, 6-3. Even a three-hour rain delay between the first and the second sets didn’t help him. On two occasions, Muster had failed to win a match as world No 1.
“It’s not bad luck,” said Muster. “It’s something very difficult to hold. For me, being No 1 is an achievement that I’ve dreamed of and it came true. It’s personal and very important to myself.”
Because of his loss, Muster could now lose the top spot again, provided Sampras or Agassi reached the semi-finals of the tournament.

Voinea, who had already called the physio in the second set of his match against Muster, would be unable to finish his second-round clash against Marcelo Rios (6-3, 4-1, ret). The Romanian would reach his best ranking, world No 36, in April 1996, and he would claim his first and only title in 1999, in Bournemouth, defeating Stefan Koubek in the final (1-6, 7-5, 7-6).
Luckily for Muster, both Sampras and Agassi would be defeated in the Indian Wells quarter-finals, allowing him to sit on the top spot for five more weeks. On April 14, he would spend his last day as world No 1, overtaken once and for all by Sampras. In the spring, he would go on a second incredible clay-court winning streak, claiming five titles in Mexico, Estoril, Monte Carlo, Barcelona and Rome, before he was defeated, to general astonishment, by Michael Stich in the fourth round at Roland-Garros (4-6, 6-4, 6-1, 7-6). After a last important tournament claimed in March 1997 in Miami, where he would beat Sergi Bruguera in the final (7-6, 6-3, 6-1), and a last quarter-finals run at the French Open in 1998 (lost to Felix Mantilla, 6-4, 6-2, 4-6, 6-3), Thomas Muster would slowly decline and retire in 1999.