Every day, Tennis Majors takes you back in time to relive a tennis event which happened on this specific day. On this day, August 2005, Rafael Nadal won his first hardcourt title. 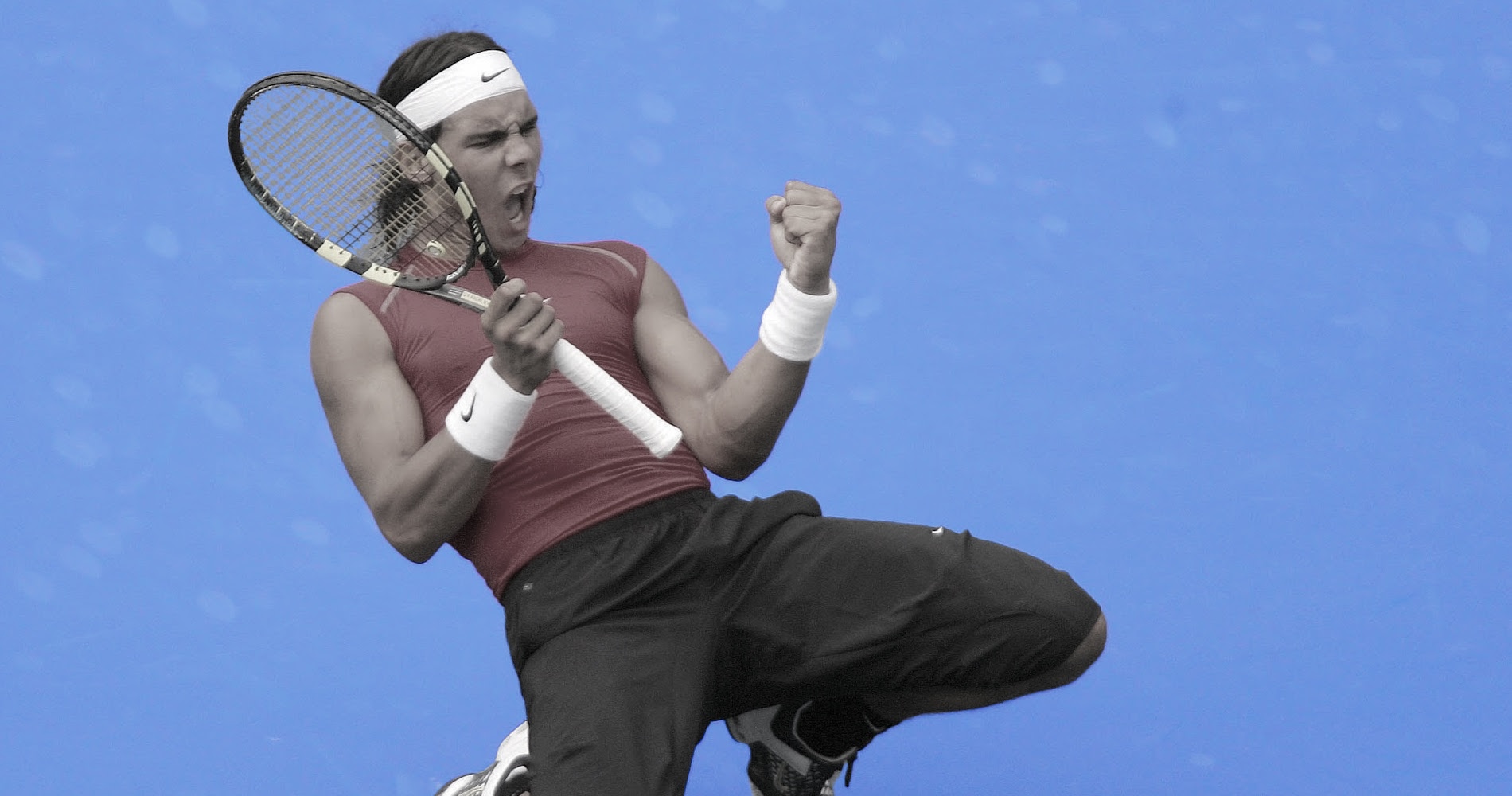 On this day, August 14, 2005, 19-year old Rafael Nadal, already the world No 2, who had won Roland-Garros a few months earlier and had already won nine tournaments on clay, clinched his first title on hard court. In the final of the Montreal Masters 1000, he edged Andre Agassi, 35 years old and still world No 7, in a clash of generations (6-3, 4-6, 6-2). This was a milestone for Nadal, proving to the world of tennis that he could triumph in important events on another surface than clay. As for Agassi, reaching the final of a Masters 1000 reminded many sportswriters that despite his age, he was not to be counted out.

Andre Agassi, the Las Vegas Kid, was a tennis legend. He had turned professional in 1986 soon become one of tennis’ biggest superstars, thanks to his amazing skills but also his interesting outfits, including the iconic denim shorts and the pink bicycle shorts (worn underneath).Taught by his father and bred at the Nick Bollettieri Academy, his game relied on a great return (the best of his time) and on hitting the ball on the rise on both sides with incredible power, which was revolutionary at the time and then copied by generations of tennis players. After finishing runner-up three times, once at the 1990 US Open and twice at Roland-Garros (1990 and 1991), he claimed his first Grand Slam title at Wimbledon in 1992, defeating big server Goran Ivanisevic in the final (6-7, 6-4, 6-4, 1-6, 6-4). This title was followed by the 1994 US Open and the 1995 Australian Open, the only time he beat his eternal rival, Pete Sampras, in a Grand Slam final (4-6, 6-1, 7-6, 6-4). He reached world No 1 shortly after this success, on April 10, 1995, and stayed there for 30 weeks.

In 1996 and 1997, despite a gold medal claimed at the 1996 Olympic Games in Atlanta, Agassi had a very hard time and his ranking dropped as low as world No 141. Displaying great humility, he went back to play on the Challenger Tour at the end of 1997 to regain confidence. In 1999, he finally triumphed at Roland-Garros, eight years after his second final loss, after a dramatic final where he edged Andrei Medvedev (1-6, 2-6, 6-4, 6-3, 6-4). That year, after finishing runner-up to Sampras at Wimbledon (6-3, 6-4, 7-5), he claimed a second US Open crown and regained No 1 spot for 52 extra weeks. In the following years, he added three more Australian Open titles to his career achievements (2000, 2001, 2003) and appeared for the last time at the top of the ATP ranking on September 7, 2003. In 2004, he started well, reaching the semi-finals at the Australian Open, which he lost against Marat Safin (7-6, 7-6, 5-7, 1-6, 6-3. At 34, the legend was still alive, but in the following months, injuries prevented him from performing at his best. At Roland-Garros, he lost in the first round against qualifier Jérôme Haehnel, suffering from a back pain which would force him to withdraw from Wimbledon. In July 2005, he was still world No 6, thanks to the quarter-final he had reached at the 2004 US Open and at the 2005 Australian Open (defeated each time by Roger Federer), but he had only claimed one title in the last 18 months. Bothered by injuries, he had lost in the first round of Roland-Garros in May, and he had not attended any other tournament before Los Angeles, in late July, where the Las Vegas Kid delivered a vintage performance and clinched the title, crushing one opponent after the other. With this outstanding result, Agassi took the plane to Montreal with renewed ambition.

In August 2005, Rafael Nadal was only 19 years old, but witnessing him reaching the final of the Montreal Masters 1000 was not a surprise anymore. A few months before, ranked No 31 in the world, he had made it to the Miami Open final, where he forced world No 1 Federer to a five-set marathon – eventually losing 2-6, 6-7, 7-6, 6-3, 6-1. Later in April, he claimed his first Masters 1000 tournament, in Monte-Carlo, defeating former Roland-Garros runner-up Guillermo Coria (6-3, 6-1, 0-6, 7-6). The following week, he remained undefeated in Barcelona, beating Juan Carlos Ferrero in the final (6-1, 7-6, 6-3) and entered the top 10 for the first time in his career. In Rome, bursting with confidence, he continued his winning streak, edging Coria in the longest ATP final ever played (6-4, 3-6, 6-3, 4-6, 7-6). These unbelievable results made him the favourite for his first appearance at Roland-Garros. This new pressure did not disturb Nadal, who won the tournament at his first attempt, beating Federer (6-3, 4-6, 6-4, 6-3) in the semi-final and Mariano Puerta in the final (6-7, 6-3, 6-1, 7-5). He was now No 3 in the world, but on grass, with his game based on an amazing topspin forehand and great defensive skills, he did not achieve any remarkable results, and after Wimbledon, he stayed in Europe to attend and win two clay-court tournaments, in Bastad and Stuttgart. Arriving in North America, his next challenge was to prove he could perform as a top three player on another surface than clay.

The 2005 final of the Canadian Open, held that year in Montreal, saw an interesting clash of generations. Indeed, when Nadal was born, in 1986, his opponent of the day, Andre Agassi, was already competing on the Tour. Nadal had grown up as a tennis player watching the Las Vegas Kid on television, but this time, Agassi stood in front of him in person, trying to prevent him from claiming his first title on hard court.
With his young age, his great fitness and his recent results, Nadal was the favourite on paper. Yet, Agassi was not to be counted out: he had just won the tournament in Los Angeles and he was a hard-court specialist, whereas Nadal had only succeeded on clay so far.

With his experience, Agassi knew that playing aggressive was his only hope to disturb the Spaniard. From the very start, he parked himself on the baseline and tried to dictate the game by hitting every ball on the rise, to avoid being overwhelmed by Nadal’s topspin. It was not enough and the young lefty’s defensive skills often pushed Agassi to take too much risk. Nadal took the first set, 6-3. Then, with the support of the crowd, the American increased his level, and, thanks to several amazing shots, he managed to outspeed Nadal enough to take the second set, 6-4. In the first game of the final set, Agassi hit an incredible winner backhand half-volley from the baseline. At that moment, it seemed that the Las Vegas Kid could actually upset the Roland-Garros champion, but he ran out of fuel in the decider. Exhausted by the extended rallies, he was forced to take more and more risks , and eventually, he started to miss too much. Nadal sealed the set 6-2. After one hour and 58 minutes of great tennis, the young Spaniard could enjoy his first title on hard court.