May 31, 2009: The day Rafael Nadal lost at Roland-Garros for the first time

Every day, Tennis Majors takes you back in time to relive a tennis event which happened on this specific day. On May 31, 2009, the unthinkable happened, as Rafael Nadal was beaten at Roland-Garros for the first time 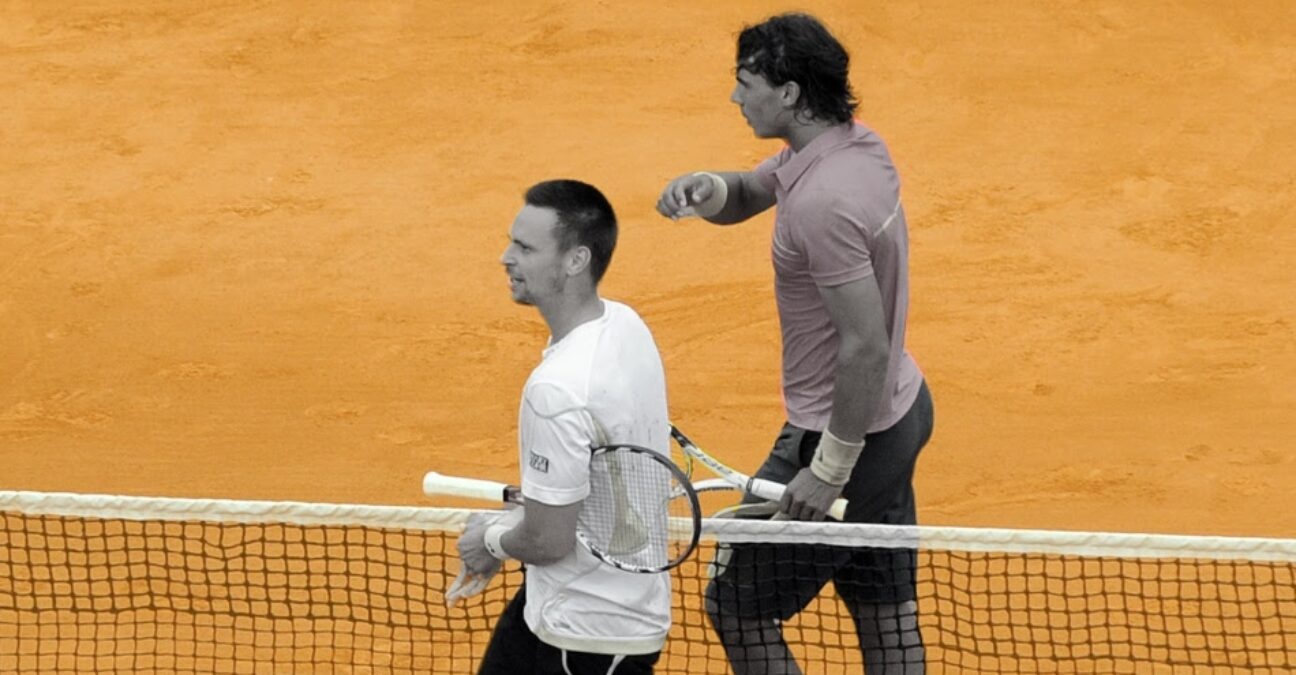 On this day – Nadal Soderling

On this day, May 31, 2009, the unbelievable happened as Rafael Nadal was defeated for the first time ever at Roland-Garros, in the fourth round by Robin Soderling, whom he had destroyed just a few weeks earlier in Rome, 6-1 6-0. This was one of the biggest shocks in the tournament’s history. Nadal had triumphed at Roland-Garros four times in a row between 2005 and 2008 and had won 31 matches in a row there. Rafa’s loss also created a new opportunity for his rival Roger Federer to finally win the one major that had been eluding him.

Rafael Nadal was only 22 but his achievements had already secured him a place in tennis history. He was still undefeated at Roland-Garros – since his first appearance in 2005, he had won all four times that he had participated. No one had even managed to push him into a fifth set. Not only was he considered almost unbeatable on clay, having lost only two matches since his loss to Igor Andreev in Valencia, in April 2005, but he had now improved his game and had claimed three of the previous four Grand Slams on different surfaces. He became world No 1 on August 18, 2008 and it seemed that no one could prevent him from dominating the tour. He had already collected five trophies in 2009, including the Australian Open and three Masters 1000 events (Indian Wells, Monte-Carlo, Rome). He seemed to be on his way to a fifth consecutive Roland-Garros title, without anyone to challenge him.

Robin Soderling, from Sweden, was born in 1984. He had claimed his first title on the tour in Lyon at the age of 20 and, with his powerful serve and killer forehand, he was predicted to quickly become a top 10 player. However, he was often betrayed by his emotional outbursts and his results had not matched the expectations. At the start of the 2009 Roland-Garros Championships, three months before his 25th birthday, Soderling was ranked No 25, and had won only three tournaments on the tour, Lyon being the biggest one. The Swede had yet to reach the fourth round in a Grand Slam tournament as well.

All three of Soderling’s titles had come on indoor courts and clay was not considered to be his best surface, as his Roland-Garros record showed: in five appearances, he had never made it to the fourth round, and three times he had lost in the first round.

Rafael Nadal had already become part of Roland-Garros history by claiming four titles there. In 2009, a part of the French public started to think his dominance was killing the excitement of the tournament as no one seemed to be capable of challenging him. 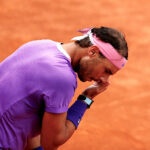 The facts: Soderling becomes the first player to beat Nadal at Roland-Garros

Scheduled on the Philippe Chatrier court on Sunday May 31, 2009, the encounter between Nadal and Soderling was not supposed to be one of the marquee matches. The Bull from Manacor was the tournament favourite, the King of Clay, undefeated at Roland-Garros, while his opponent, ranked 25th in the world, had never been known to be a great player on red dirt. The only exciting thing about this match was the fact that the two players had a personal history. Although Soderling had never defeated the Spaniard, he had pushed him to five sets in the third round at Wimbledon in 2007. In this intense match, played over five days due to multiple rain delays, the Swede had made himself famous by provocatively mocking Nadal’s routine of tugging away at his underwear. The left-hander did not appreciate the joke and after Nadal eventually sealed his victory (6-4, 6-4, 6-7, 4-6, 7-5), Soderling gave him a very cold handshake.

In 2009, in Rome, in a match easily won by Nadal, 6-1, 6-0, Soderling showed poor sportsmanship when he showed the umpire a wrong mark. If there was anyone Nadal did not want to lose against, it was probably Soderling.

Yet from the very start, the tall Swede made it clear that he was not there to let himself be destroyed the way it had happened in Rome. He was serving bombs and his flat forehand seemed to be in the groove, one of those rare days when he couldn’t miss. Nadal, on the other hand, was playing too short to stop his opponent from dictating the rallies and his defensive game was not at its usual level. To the general surprise of the crowd, Soderling sealed a perfect first set, 6-2.

Nadal, even if he was obviously not having a good day, was still a tough opponent. As soon as Soderling’s level slipped a little bit from perfect to excellent, and a few mistakes from the Swede later, the four-time champion had bounced back to claim the second set 7-6. Things were back to normal, people thought. Nadal would now crush his opponent in the next sets, as had been the regular scenario in his previous matches.

Unfortunately for him, Soderling was no regular opponent that day. Playing in the zone, he kept blasting forehands in every direction, firing monster serves, stepping in to punish Nadal on any short ball. The third set was his, 6-4. The entire tennis world was now watching. No one had ever managed to win two sets against Nadal at Roland-Garros. Anything was now possible.

Robin Soderling did not let the pressure prevent him from taking his chances. He knew that the only way for him to keep Nadal at bay was to continue applying his aggressive strategy. He could not allow Nadal to dictate the game and run him around the court. On the other side of the net, the King of Clay could not find enough depth to block the Swede on his backhand side as he had originally intended, and therefore, he was exposed to Soderling’s massive forehand.

As the fourth set went on, the crowd started to believe in Soderling’s chances to actually give Nadal his first loss ever at Roland-Garros. The unpredictable French public, probably excited by the idea of such a surprise, chose to support the Swede. By the time the players got into a tiebreak, Nadal had several thousand opponents.

As always, Nadal gave everything he had to push Soderling into a fifth set. However, it was not enough. The Swede was too good. The tennis world could not believe what had just happened; against all odds, Soderling had defeated Nadal in the fourth round at Roland-Garros, 6-2, 6-7, 6-4, 7-6.

What next? Soderling reaches 2 finals in Paris while Nadal returns to win 9 more titles

After the match, it would appear that Rafael Nadal was mentally worn out by family issues, which had been bothering him for several months already, coupled with a very intense schedule since the start of 2009 and a painful left knee. He would pull out of Wimbledon, missing the honour of opening the tournament as the defending champion. He would not win a title in the second half of the season, still reaching the semi-finals at the US Open where Juan Martin del Potro would destroy him (6-2, 6-2, 6-2). Only with the return of the clay-court season, in 2010, would he become his true self again. Nadal would add nine other Roland-Garros titles to his list of achievements, holding a record of 13 – and counting – Roland-Garros crowns.

Soderling would seize the momentum in Paris that year and continue his run to reach the 2009 Roland-Garros final, where he would be defeated by Roger Federer (6-1, 7-6, 6-4). Federer would also eliminate him from Wimbledon and the US Open that year but in 2010, Soderling would create a major upset in Paris again, upsetting the Swiss in the quarter-finals (3-6, 6-3, 7-5, 6-4). He would go on again to reach the final but this time Nadal would prevail in straight sets, 6-4, 6-2, 6-4.

Nadal and especially his uncle Toni would make it obvious that they did not appreciate how the public supported Soderling on this day. Toni Nadal would even call the French crowd “stupid”. Over the years, this feeling would fade and Nadal would have much more support from the Parisian public than in his first years. Only once again would Rafael Nadal lose again in his favourite tournament, when he was beaten in the 2015 quarter-final by Novak Djokovic (7-5, 6-3, 6-1). This would make Soderling’s 2009 victory, which was already a major shock at the time, even more legendary as time went by.

Read also
Wilander on the big 3: “Rafa’s confidence is dented more than Novak – but he has the carrot of 21”
Tennis Majors
Share this story
Facebook Twitter Linkedin Whatsapp Email