Every day, Tennis Majors looks back at the biggest moments in tennis history. On May 10, 1996, 15 year-old Martina Hingis shocked the tennis world by handing long-time world No 1 Steffi Graf her first loss of the year in Rome 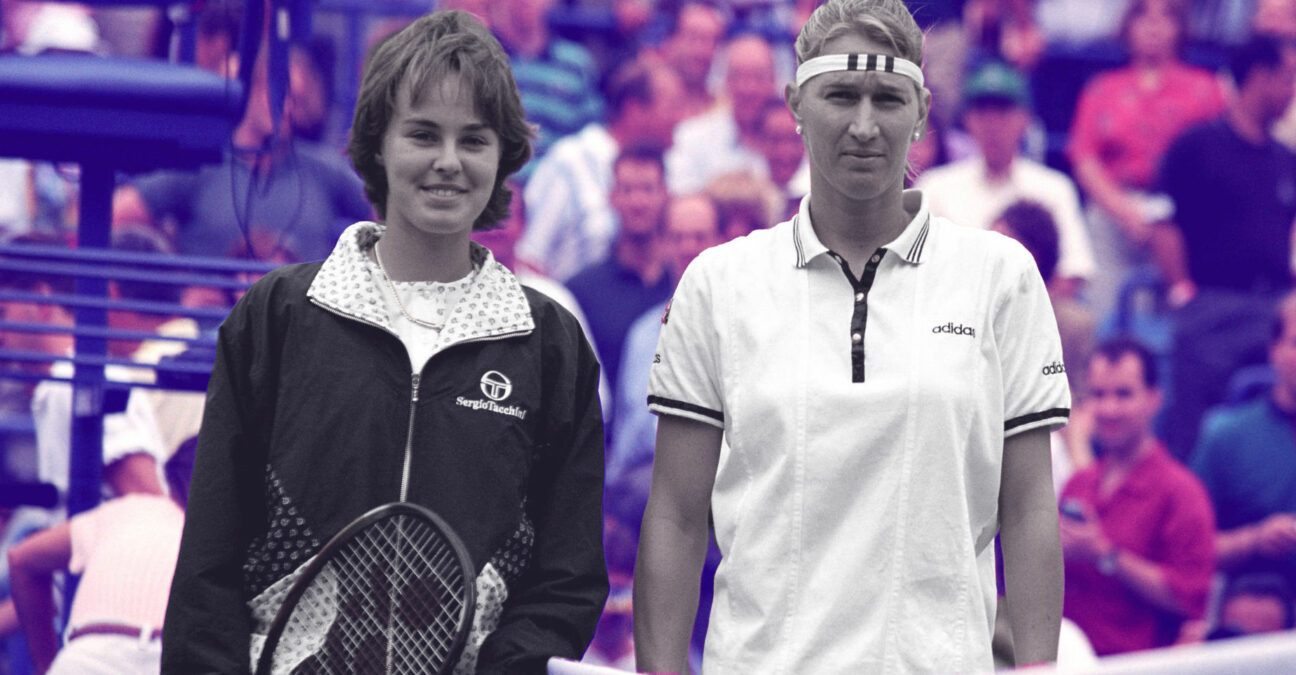 On May 10, 1996, 15-year-old Martina Hingis edged long-time world No 1 Steffi Graf, unbeaten on clay for two years, in the Italian Open quarter-finals. That day, the young rising star convinced the last doubtful observers that she had the potential to enjoy great achievements. Less than a year later, in March 1997, she would sit on top of the WTA rankings before turning 17.

Born in 1980, Martina Hingis’ mother Melanie Molitor named her after tennis champion Martina Navratilova. Taught by her mum, she soon became a real prodigy, winning the junior event at Roland-Garros at the age of 12. She had started competing on the tour at 14, but she had been allowed to attend only 15 tournaments before the age of 16, a rule she protested against: “How can I enter the top 10 like that?”. Her game relied on an extraordinary hand-eye coordination, great tactics, amazing touch, and great anticipation. In her early career, she was still said to lack power and a decent second serve.

The youngest player to ever win match at the Australian Open in 1995, she was already No 20 in the world in May 1996. Her best performance so far was in 1995, when she finished runner-up in Hamburg, edging two top 10 players; Jana Novotna, No 5, and Amanda Coetzer, No 7, before losing to Conchita Martinez, the No 3. But this time she was to face a very different challenge: Steffi Graf.

Born in 1969, Steffi Graf had been world No 1 without a break since the summer of 1993. She had already been sitting on top of the WTA rankings without an interruption between 1987 and 1991. She completed an amazing Golden Grand Slam in 1988, claiming the gold medal at the Olympic Games on top of the four Grand Slam crowns, a unique achievement in tennis history. She also held the record of six Grand Slam titles in a row in 1987 and 1988.

By winning the 1995 US Open, she had become the only woman ever to win each of the four Grand Slam titles at least four times. She had to undergo foot surgery at the end of 1995. Her game was based on a tremendous forehand which she could fire in any direction, a legendary footwork and a sliced backhand to neutralise her opponents.

The place: The magnificent Foro Italico

The Italian Open had been held in Rome since 1935, at the Foro Italico, a massive sporting complex originally designed to support an Italian bid to host the 1940 Olympics. One of the Masters 1000 events, it is still one of the most prestigious clay-court tournaments in the world. Almost all of the best players in history have set foot on the courts of the famous Stadio del Tennis di Roma venue. Young Martina Hingis had never attended the event before while Steffi Graf had won the tournament in 198, but had never played it since.

The facts: Graf the big favourite

Before facing Steffi Graf that day, Martina Hingis had already beaten some top 10 players, but the German was no regular player. She represented the ultimate challenge. An 18-time Grand Slam champion, she had not been defeated on clay since the Roland-Garros semi-finals in 1994 (defeated by Mary Pierce 6-2, 6-2). In 1996, she missed the Australian Open, recovering from foot surgery, and then won the two tournaments she attended, Indian Wells and Miami, dropping only one set. The list of her career achievements was so impressive that no one could seriously believe in the chances of a teenage girl like Martina Hingis. In fact, the two women had met before twice, in 1995, and Graf had won easily, in Paris Coubertin (6-2, 6-3) and at Wimbledon (6-3, 6-1).

And the first set confirmed the logic. Despite being not really comfortable on the slow clay-courts of the Foro Italico, Steffi Graf appeared to be in control. The first games were close, but at 2-2 she increased her level to claim the set 6-2. Martina Hingis did not give up. As a young rising star, she was confident in her game. Wasn’t she claiming, a few months before, that sometimes she had so many options she didn’t know which one to choose? In the second set that day, she seemed to have cleared her mind. Playing deep enough to keep Steffi Graf at bay, mixing up groundstrokes with clever dropshots, she was now puzzling the World no.1. Meanwhile, the German seemed unusually impatient, trying to hit winners from the worst possible positions. Hingis broke her opponent three times to claim the second set, 6-2.

In the final set, Graf continued to make numerous mistakes, helping the Swiss Miss to take advantage 3-1. The German did not intend to be defeated by a teenager and broke back, but she eventually sealed her own fate by double-faulting on a break point at 3/4 while the youngster was taking her chances. A few minutes later, it was all over. After Steffi Graf had missed a last forehand, Martina Hingis claimed the victory. She had given the German her first defeat in 1996.

What next: Graf renaissance, Hingis hits No 1

Graf would lose only three matches that year. She would win the three remaining Grand Slams and the WTA Championship (the women’s Masters). She would have her revenge against Hingis; she would face her three more times this year, in more important occasions, and would beat her each time. First, she would defeat the Swiss at Wimbledon in the round of 16 (6-1, 6-4); then she would beat her in the US Open semi-finals (7-5, 6-3), and she would eventually prevail in the WTA Championship final (6-3, 4-6, 6-0). The German would end the year as world No 1 for the eighth and final time in her career. In 1997, struggling with injuries, she wouldn’t win a Grand Slam tournament, for the first time since 1986. After two complicated seasons, she would complete a last tour de force by winning a 22nd Grand Slam title at Roland-Garros, defeating…Martina Hingis in a dramatic final (4-6, 7-5, 6-2). Graf would retire from tennis in August 1999.

In Rome, Martina Hingis would pass through Irina Spirlea in the semi-final (6-2, 7-5), only to be deprived of the title by Conchita Martinez (6-2, 6-3). Her real breakthrough would happen in the last part of 1996. She would reach the US Open semi-finals (edged by Graf), before winning the Porsche Grand Prix title, beating world No 5 Anke Huber (6-2, 3-6, 6-3). She would then claim another title in San Jose, defeating No 2 Monica Seles (6-2, 6-0). She would finish 1996 being the women’s Masters runner-up, where she would be outplayed again by Steffi Graf. This was only the beginning of a journey that would lead her in 1997 to become the youngest ever Australian Open champion, aged 16, beating Mary Pierce (6-2, 6-2), not long before becoming the youngest world No 1 in tennis history after claiming the Miami Open title in March. She would remain on top the WTA rankings for 80 weeks, and she would claim a total of five Grand Slam titles throughout her career.