Home > Our features > On this day > May 16th, 1999 : The day Gustavo Kuerten prevented Patrick Rafter from becoming world No.1

May 16th, 1999 : The day Gustavo Kuerten prevented Patrick Rafter from becoming world No.1

Every day, Tennis Majors takes you back in time to relive a tennis event which happened on this specific day. On May 16th, 1999, Pat Rafter missed the opportunity to become World No1. 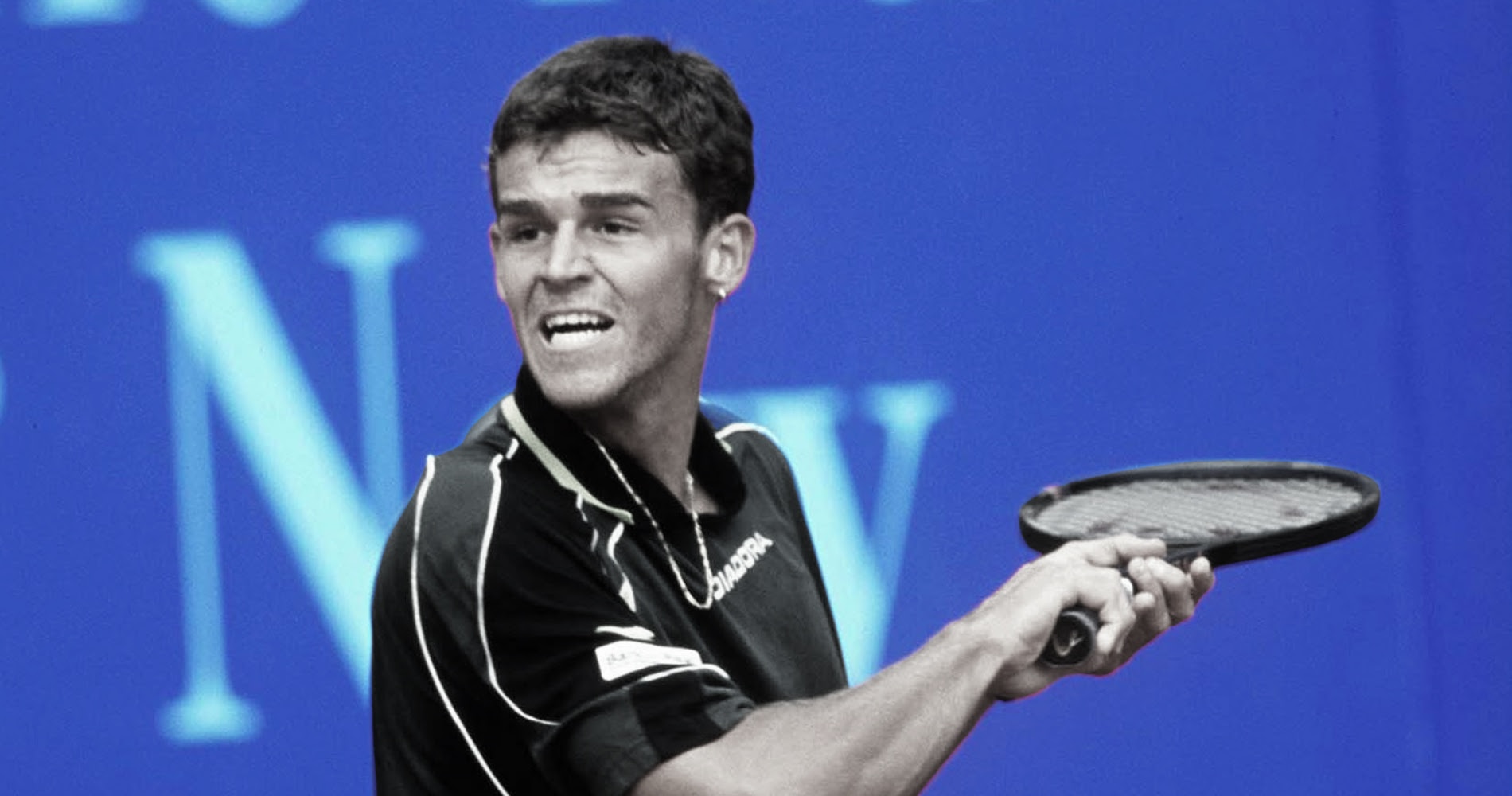 On this day, the 16th of May 1999, Brazilian Gustavo Kuerten defeated Patrick Rafter, from Australia, in the final of the Italian Open. By doing so, he prevented him from reaching world No.1.

Pat Rafter, double US Open defending champion, had been competing for that spot for over two months with Pete Sampras, Carlos Moya and Yevgeny Kafelnikov. It was a rare opportunity for the Aussie who was not dominating the game and was not sure to ever achieve world No.1.

Born in 1972, he had turned pro in 1991. The Australian had not achieved any remarkable results in his early career, claiming only one title before 1997, at the 1994 Manchester Open. He had reached his best ranking in 1994 as no.21 and had spent most of his time outside the top 40.

In 1998, his disappointing results in the first half of the season made John McEnroe criticize him as a one-shot Grand Slam winner and Pete Sampras expressed that he would need a second Major title to be called a great player.

He was described by Bud Collins as “a humble man known for a gracious manner on the court, great generosity and a gentlemanly demeanor at all times”.

Born in 1976, he had made himself famous in 1997, when, ranked no.66 and unknown to the general public, he claimed the title in Roland-Garros, defeating the last champions on his way (Thomas Muster, Yevgeny Kafelnikov and Sergi Bruguera in the final, 6-3 6-4 6-2). Not only was it his career first title, but it was even his first final on the tour.

His game, relying on a great first serve and an impressive one-handed backhand, topped with great drop shots, made him a natural clay-court player. Finishing 1997 as world no.14, he had trouble confirming his status in 1998 and his results on hard courts were disappointing.

Although he gained in confidence during the clay season, he was defeated in the second round of the French Open by young Marat Safin, who would reach the quarter-finals in five sets (3-6  7-6 3-6 6-1 6-4).

He started the 1999 season as world no.23, and, although some thought his 1997 magic had short-lived, Guga was confident in his abilities. Reaching the semi-final in Indian Wells (lost to Moya, who became world no.1 that day), he then delivered an impressive Davis Cup performance on clay against Spain, defeating Carlos Moya and Alex Corretja, before claiming his first Masters 1000 title in Monte-Carlo. Gustavo Kuerten was turning into a favourite for the Roland-Garros crown.

While Patrick Rafter had never made it past the second round in Rome, Gustavo Kuerten had obtained one of his best results there in 1998, reaching the semi-finals where he was defeated by Marcelo Rios (score).

For both the participants of the Italian Open final, the stakes were particularly high on the 16th of May, 1999.

At the start of the season, Guga was ranked no.23 and it seemed that his 1997 French Open could stay a one-shot performance, until, in March, the Brazilian recovered his magic. A few weeks before the Italian Open, he had prevailed in Monte-Carlo, the start of the clay-court season. Now in Rome he was fit, his serve was sharp, his backhand was precise.

Apart from Karol Kucera who pushed him to a third set in the quarter-finals (3-6 6-4 7-5), he had passed all his opponents in straight sets, including world no.1 Yevgeny Kafelnikov, defeated in the 16th round, 7-5 6-1. He was turning into the best clay-court player in the world and claiming the title here would make him the favorite in Roland-Garros.

Patrick Rafter had a very different goal that day. Prior to this week, he hadn’t won two matches in a row since the Australian Open, where he had been beaten by Thomas Enqvist in the third round.

Nonetheless, he somehow found himself contending for world no.1! In fact, Pete Sampras, who had dominated the tour for six years, had appeared very scarcely so far in 1999, and, as no one else was truly above the pack, Pat Rafter, as the 1998 US Open champion, had now the opportunity to take his seat.

His two rivals in that quest were Carlos Moya and Yevgeny Kafelnikov. The Spaniard had already reached the top spot in March, before Pistol Pete claimed it only two weeks later. On the 3rd of May, it was Kafelnikov’s turn to become world no.1.

Now, the Australian, after a great week in Rome, where he had defeated Andre Agassi in the 16th round (6-4 7-6) and clay-court specialist Felix Mantilla in the semi-final (6-3 7-5), was one match away of writing history as the first ATP no.1 from Down Under since John Newcombe in 1974.

Unfortunately for the Aussie, Kuerten was too big of a puzzle for him that day. As Rafter struggled with his first serve, Kuerten put a lot of pressure on his volleys with great returns and accurate passing shots. Guga was serving well and rallied Rafter around the court with his backhand variations. His natural clay-court game was one step ahead of Rafter’s abilities on dirt and Kuerten won in three sets, 6-4 7-5 7-6. Pat Rafter’s bid for world no.1 was eluded.

What was next : Kuerten won the French

Gustavo Kuerten, jumping to the eighth rank on the ATP charts, was now the favourite for the upcoming French Open. He would fall in the quarter-finals, surprised by Andrei Medvedev (7-5 6-4 6-4), but he would remain the best clay-court player on the tour for a while, and would eventually claim two more titles in Roland-Garros in 2000 (beating Magnus Norman, 6-2 6-3 2-6 7-6) and 2001 (edging Alex Corretja, 6-7 7-5 6-2 6-0), the year he drew his famous heart on the Court Philippe Chatrier.

In 2000, after an amazing triumph at the Masters Cup, where he defeated both Andre Agassi and Pete Sampras on fast indoor courts, he would end the year as world no.1. Suffering from a serious hip  injury, he would not be able to defend his 2001 Parisian title in 2002, and the rest of his career would be a long struggle against this injury that he would never overcome. Eventually, he would retire from the game in 2008, after two years of inactivity, and a last appearance in Roland-Garros.

Pat Rafter would finally claim the world no.1 spot, on the 26th of July, 1999, although he would only stay at the top for one week, becoming the shortest no.1 in tennis history.

Although the entire Australian nation waited for him to claim the title in Melbourne Park, his best attempt there would be a semi-final in 2001, lost to Agassi (7-5 2-6 6-7 6-3 6-3). At the end of 2001, his shoulder would need surgery. He would never come back on the tour afterwards and Patrick Rafter would announce his retirement in 2003.