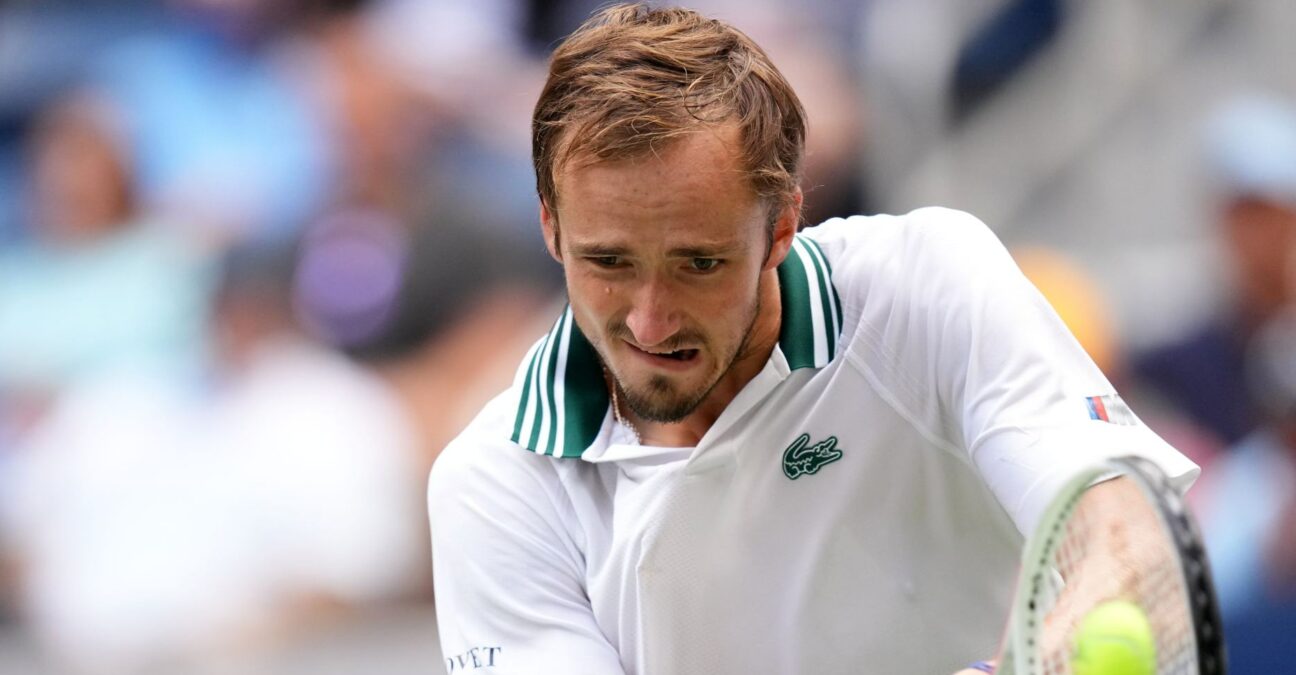 Second seed Daniil Medvedev continued his love affair with the US Open as he saw off Britain’s Dan Evans 6-3, 6-4, 6-3 to reach the quarter-finals for the third year in a row.

The No 2 seed is through to the last eight without dropping a set. He served beautifully when he needed to and never allowed Evans the chance to break his rhythm.

“Today I liked my serve but there was a forehand return which I think was the best shot of the match, so I liked that too,” said Medvedev, who found the line having played the return around the net from a wide angle.

The Russian’s only moments of concern came when Evans broke back midway through the second set but he righted the ship immediately and then pulled away in the third. Two years after he reached the final, he looks very much in the mood again.

“When I first came back here in 2020, I played first round, even without fans, I don’t want to say goosebumps, but it was still some memories,” he said. “Now I just want to make it to the finals again to have another thing to remember and hopefully a better one.”

Evans: “Some people are better than you, and that’s it, really”

Evans will move up to around No 23 in the rankings – a new career-high – and he will leave New York with plenty of positives, hoping to break into the top 20 in the remaining months of the year and help Britain in the Davis Cup.

But the 31-year-old admitted he would be happy to avoid Medvedev wherever he turns up next.

“You’re looking at the draw hoping he’s nowhere near me for the rest of my days,” Evans said, smiling. “I mean, I think you just got to take it as it is. Got a good, healthy lesson out there and just move on. It’s just a tough match. Some people are better than you, and that’s it really.”

Dutchman Botic van de Zandschulp came into the US Open ranked 117 but he is into the quarter-finals with a big-name scalp and heading towards the top 50 after he ousted 11th seed Diego Schwartzman 6-3, 6-4, 5-7, 5-7, 6-1 in a brilliant performance.

The 25-year-old stormed through the first two sets and led 4-2 in the third before reality began to set in. Schwartzman dug deep and won the third set and then saved two match points at 4-5 in the fourth to force a decider.

The momentum was with the Argentine but Van de Zandschulp gathered himself for another push and ran away with the final set to clinch victory and become only the third qualifier ever to reach the last eight of the US Open.

“In the first three sets til two sets for me, 4-2, I played pretty good, played flawlessly, I think,” he said. “From there on, I start thinking maybe you can win the match, started to get a little bit nervous. I thought, in the fifth I played my best tennis of the match, played aggressively, (and) I think in the end I deserved to win.

Asked on court how he thinks his effort will go down back in Holland, he said: “I think they will be amazed and I hope proud.”

Schwartzman said he was beaten by the better player on the day.

“It was a difficult match,” he said. “He was playing very good tennis. His tactic today was working perfectly. Maybe I had lucky in the third and fourth to continue playing the match today because he was in the score up, he was playing better than me.

“Then at the end I think he have luck in a few lets, volleys. When you are in the fifth you cannot fail. If you fail, you’re out. I think he deserves the win. He played much better all the match. At the end I was fighting but it was not enough today.