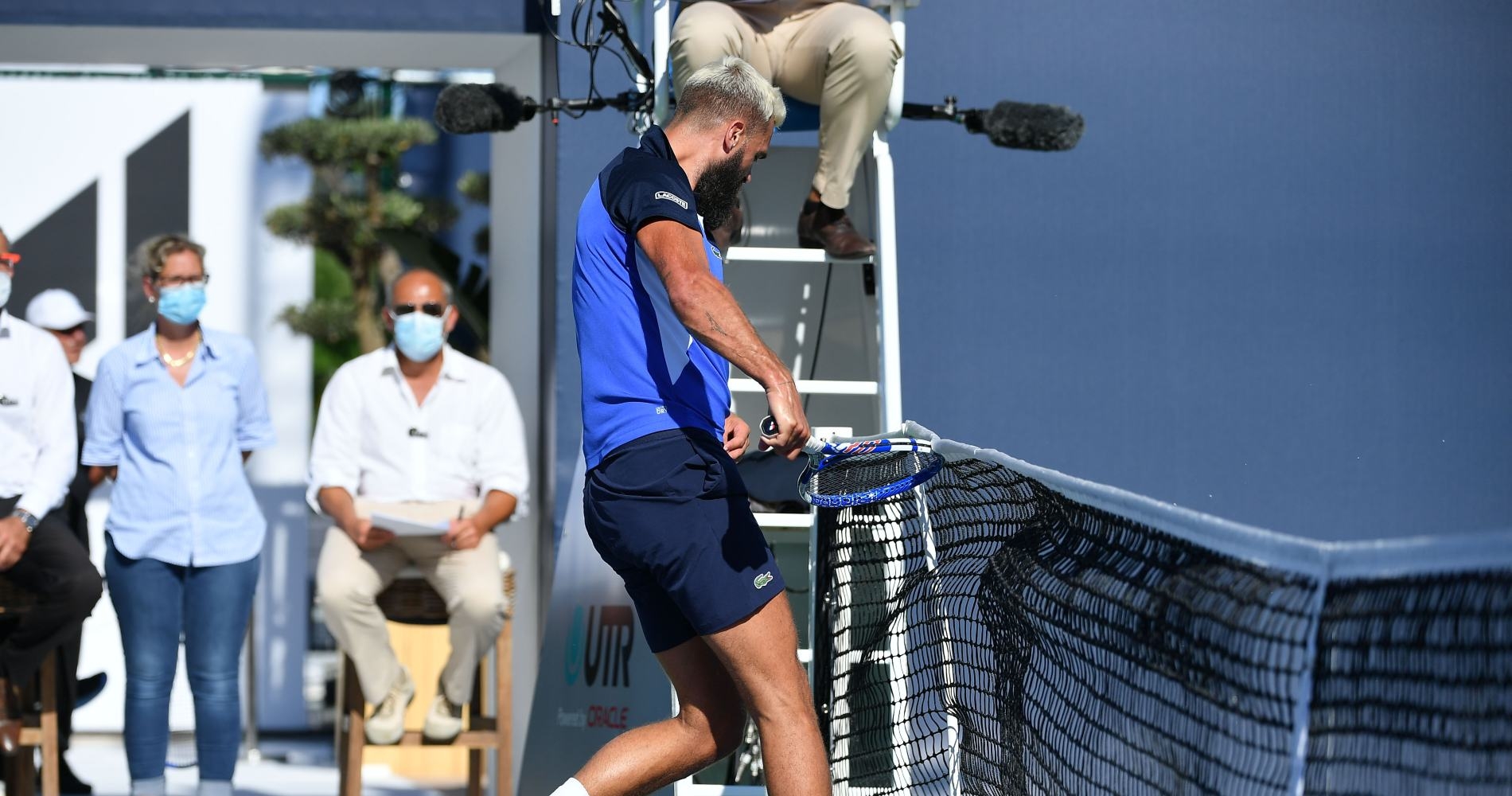 The seventh match of the second weekend UTS action featured another wonderful clash of styles with the unpredictable flamboyance of Paire attempting to nullify the almighty Hammer blows of Berrettini.

Back-to-back 4-0 finishes to start UTS1 Day 4.@benoitpaire ran out of answers to The Hammer's solid game today (good try on that last one, Benoit 😉). #UTShowdown pic.twitter.com/HdSxCRKBTp

On form, it looked like a close one to call with both players 2-1 on their wins v losses, The Rebel having mounted an impressive comeback against Corentin Moutet on Saturday and Berrettini failing to figure out the subtle variation of Feliciano Lopez.

One of the most exciting and important features of the revolutionary UTS format is the use of cards that the players can deploy to their advantage during each 10-minute quarter. And on this occasion, there was a difference in tactics, The Hammer choosing ‘-1 Serve’ and ‘Steal Serve’ to his opponent’s ‘Steal Serve’ and ‘Winners Count x3’.

As was the case on Saturday, it was another sleepy start for The Rebel, who had professed a penchant for a party and a good lie-in during the week. Against serves and groundstrokes as ferocious as the Italian’s, he had to wake up quickly, and it was a surprise that neither had played a card as the clock ticked down to three minutes.

A fine winner from Paire at 6-10 prompted a first card from The Hammer, and it paid dividends, Paire serving a fault with his only allowed serve on ‘-1 serve’. An eight-point advantage was too much for The Rebel to pull back, especially as Berrettini was first to the punch with his second card of ‘Steal Serve’.

Paire responded with an ace on his Winnerx3, but it was too little, too late, and The Hammer was off to flyer.

“I’m a competitive guy, I don’t like to lose, and I don’t think it was really fair (the Lopez controversy) but here I am now and it’s the next match. It made me change a little bit and I didn’t like the feeling and I thought it was the right thing,” said Berrettini of his card choices on Saturday.

It was a better start to the second quarter for The Rebel, now fully warmed up, and the Frenchman led for the first time at 5-4 before producing his first gambit of Winnerx3. And, despite not getting the maximum, two first serves edged him further ahead as the clock ticked into the business end of the quarter.

Yet, against the power game of Berrettini, the racket can be taken out of any player’s hand in an instant, two huge winners prompting a huge and typical outburst of the man dubbed The Rebel, rackets and language flying in equal abandon.

Much like the great John McEnroe in years gone by, the venting of anger seemed to spur on Paire to claw back the next three points and set up a final point decider. For Paire fans, and the head of the temperamental Frenchman, it went the wrong way, leaving Paire ranting and raving again and with a mountain to climb.

Paire now needed to win the final two quarters to force a sudden death play-off, and it was the perfect start to the third quarter as The Rebel surged to a 7-3 lead before a first coaching time out, of which players are allowed four per match. The message? Breathe, take your time and don’t forget your cards!

It was advice heeded as The Rebel opted to play his Winnerx3, winning both of his points despite not making the clean winner. A Steal Serve immediately followed, as Paire pressed home his advantage with a six-point lead. The lead looked decisive, but when Paire missed an easy overhead and threw in a fault, it was suddenly 12-12 with seconds remaining on the clock! Then, disaster. Another easy netted volley saw The Hammer edge ahead, but there was still time for one more point for Paire to tie. Brain possibly frazzled, a netted attempted drop shot conceded the quarter and with it, the match.

“I have the smash, I have the volley, and to be honest I don’t really want to talk much now,” said a frustrated Paire. “You know me, I’m usually joking all the time but the only thing I want now is to put my head in an ice bath! The smash is easy, the volley is easy, and I don’t know what to say. Honestly, it’s not good.”

The round-robin nature of the Ultimate Tennis Championships also means that every quarter is important, especially with the competitors taking their 2-1 W/L record into the matches going forward.

The Rebel made a good fight of it, getting his head back into the game, but there was no stopping the Italian juggernaut, who rounded out an incident-packed 4-0 victory.

“I never quit and I was ready to play every point although I was down six points, I knew I had all my cards left, so I was playing just thinking about the next point and I was able to come back,” said a relieved Berrettini. “Benoit has a great serve but sometimes he struggles with his second, so I want to put pressure on him.”