Thiem battles past Tsitsipas in classic clash of UTS stars 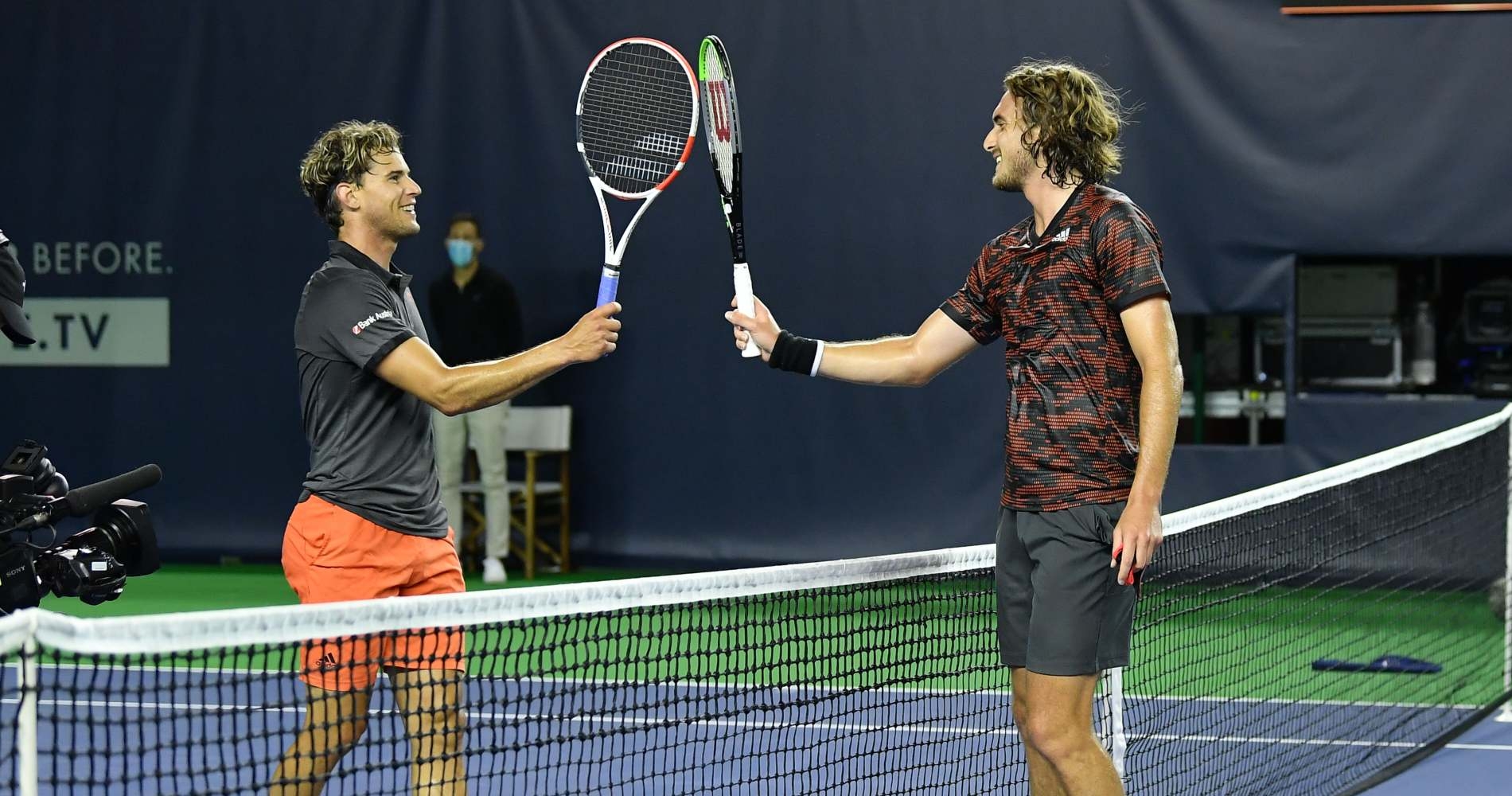 Easily the most anticipated match of the day, and possibly the tournament in this exciting new round-robin format of tennis pitched World No.3 Dominic Thiem against the in-form World No.6 Stefanos Tsitsipas, who sat on top of the table.

Thiem came into the tournament having played in Belgrade for Novak Djokovic’s Adria Tour in Belgrade. And, despite a change of surface and format, Domi was quickly into his groove, covering every inch of the court to edge ahead in the opening quarter – a sumptuous flicked backhand pass one of the shots of the day and only on the eighth point!

Despite no ATP Tour points being up for grabs, this tournament has already proved that it really matters to players and this was no friendly, both players scrambling as if their lives depended upon it.

Adding to the intrigue of the format, both players are allowed to choose between four ‘UTS cards’ to give them an advantage if used correctly. And both players opted for ‘Winners count x3’, Thiem employing a classic serve and volley put-away to open an 11-7 gap in the first 10-minute quarter.

Tsitsipas immediately followed suit, blasting down an inch-perfect ace as the match quickly developed into the classic that was expected. As the clock ticked into the final minute, only two points separated the gladiators, but as Tsitsipas found the net with a serve and volley gambit, Thiem edged clear to seal the opener 15-12.

“Yesterday (Saturday) was the first hard court match after quite a while, so I had to get used to the court,” said Theim after the opening quarter. “I think yesterday was a really good match as well in general and perfect to get into the tournament and I’m happy with my first quarter. It felt so good (the first three pointer), yesterday I didn’t have one so that felt very good.”

With Richard Gasquet admittedly playing some of his best tennis for years, it was indeed a good warm-up for Thiem. But Tsitsipas had inflicted Gasquet’s only defeat of UTS in a classic encounter and was in no mood to relinquish his unbeaten record in this new format.

But at 6-4 down, Thiem found another gear, reeling off four successive points to force The Greek God into playing his Steal Serve card, two points drawing him level. Yet again it boiled down to the narrowest of margins, Tsitsipas winning the deciding point of the quarter to edge out the 13-11 winner.

“I just followed my instincts, remaining calm, thinking about the angles I’m going to hit whilst playing the rally and the right execution, the right mindset whilst I’m on court,” said Tsitsipas after levelling things up. “I had a more clear mind about what I’m doing and I just took my time a bit more.”

Thiem fights back from the brink to win on deciding point

Even in this new format of tennis, this was the scenario that all viewers were hoping for, in the knowledge that the match would now go down to a crucial fourth quarter whichever player took the next. And this time it was Thiem who grabbed the early initiative with one of the shots of the tournament, a lunging volley at full stretch edging him three points clear.

At 3-9 down, it was certainly the time for Tsitsipas to play his Winner x3 card, and four successive points dragged him back into the quarter. But Thiem still had two cards up his sleeve, and a three-point winner proved sufficient for Domi to see out the quarter, after some helpful advice on his coaching time-out from father Wolfgang.

“I decided after my feelings (to use the cards late), the level was pretty high so I’m super happy and will try and win the fourth as well, now,” said Thiem. “I love him every day the same, so there’s no need for father’s day but I wish all fathers the same, happy father’s day and for all the good coached as well.”

With The Greek God still sitting atop the UTS standings and every quarter important, the prospect of a sudden death showdown still loomed large. And at 0-3 down, Tsitsipas raised his game, reeling off four successive points to put pressure on Domi. A sumptuous pass saw him pull further clear, and Wolfgang Thiem called another time out.

With Tsitsipas 13-11 up and less than 10 seconds remaining, it looked to be going to a sudden-death decider for all money. But Thiem hurried through his final two serves, levelling the quarter at 13-13 to force a deciding point. It would now either be Thiem’s match or sudden death!

And it was Thiem who emerged triumphant, as Tsitsipas netted a backhand on the final point. Despite his first defeat, The Greek God still sits atop the standings with three victories from four matches, ahead of Feliciano Lopez, Richard Gasquet and Benoit Paire.