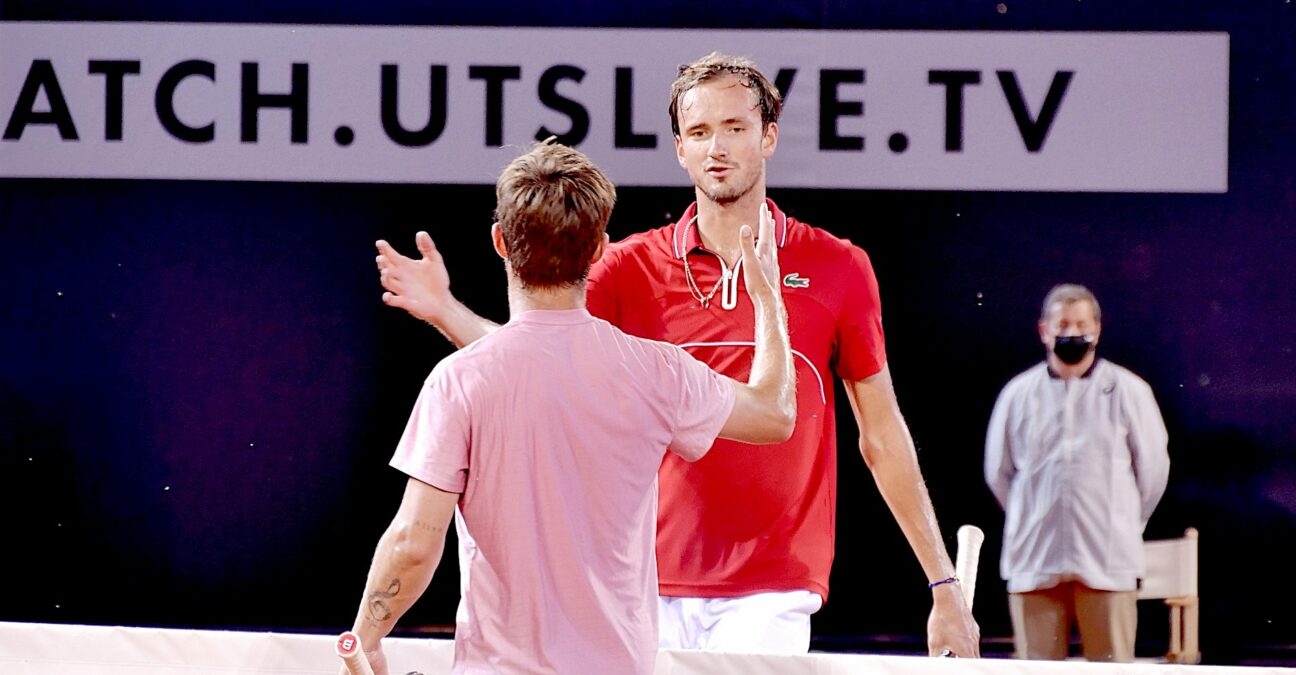 Frenchman Corentin Moutet put himself proudly on top of Group B at the end of day one of the UTS4 as he upset world No 2 Daniil Medvedev 3-1.

The Frenchman showed off his style, his temper, his panache and his class as he recovered from the loss of the first quarter to win 3-1, clinching a well-deserved 11-18, 16-13, 16-10, 18-10 victory to end a perfect day at the Patrick Mouratoglou Academy on the French Riviera.

The stalwart of the UTS4 field, Moutet began the day as an underdog but after a fine win over Taylor Fritz in his opening match, he stepped up another level against Medvedev, who had impressed in his UTS debut win earlier in the day against against Fabio Fognini.

“It was a great match,” Moutet said. “Really tough in the beginning because I couldn’t find any solutions and he’s such a great defender and was being aggressive. It was always intense but I’m really happy.”

Fast start for The Chessmaster

The Chessmaster took the opening quarter pretty handily, 18-11 but Moutet still found time to produce a bit of magic when, forced to serve and volley by the UTS card of Medvedev, he chose the underarm serve and came up with a superb volley down the line for the winner.

The 🌪️ has mad skillz…

Maybe @moutet99 is the only guy that could pull off an underarm serve-and-volley to such perfection? #UTS4 pic.twitter.com/yljDa0h4Ue

But that was about his only moment of joy in the opener as Medvedev, who admitted on the eve of the competition that he does not like clay, looked a little more at home on the surface than in the past and in the conversation with the commentators at the change of ends, Moutet seemed to take exception to something he thought Medvedev had said.

The Tornado not thrilled about the Chessmaster taking up residency at #UTS4 😂 pic.twitter.com/5ivF75lNDZ

Moutet had kept his temper in check for much of the day but his fuse finally blew when he missed a backhand return early in the second quarter, hurling his racket overarm and watching it sail over the fence.

But after retrieving a new one from his bag all the way at the other end of the court, the incident seemed to do the trick and from 7-5 down, he turned things around with some fine play, mixing slice and angles with changes of pace to keep Medvedev off his rhythm.

There goes the racquet, never to be found again…

There was still time for Moutet to argue with the umpire about the time he’d been given between points when Medvedev used one of his UTS cards but by then, his lead by was too big to slip and he levelled the match, even if Medvedev was able to show a bit of agility of his own.

MEGA style points go to the Chessmaster here — how good was this tweener by @DaniilMedwed [even though it doesn’t count 😥]#UTS4 pic.twitter.com/gvU8lT6mW6

Moutet pulls away for well-earned win

The third quarter was all Moutet as he began to grind Medvedev down and as the Russian started to tire – and maybe run out of ideas – the Tornado took control.

After taking the third quarter 16-10, Moutet pulled away from 4-4 to lead 8-4 and from then on, he never looked back, hammering an ace when Medvedev tried a last roll of the dice with his winner x 3 card at 15-9, with just under one minute remaining, with Coco Gauff watching on from the stands.

We got @serenawilliams. We got @CocoGauff.

Yeah, #UTS4 has fans from all generations 👍 pic.twitter.com/1X5lRcsQQ9

Moutet will hope to seal a 3-0 group record on Tuesday when he plays Fognini.

“I’ve never played him before so it will be a funny match,” he said.