Eye of the Coach #46: Why Denis Shapovalov will win Grand Slam titles

In the latest episode of Eye of the Coach, Patrick Mouratoglou predicts great things for Denis Shapovalov, who reached the quarter-finals at the Australian Open, saying the Canadian has the game to win multiple Grand Slam titles. 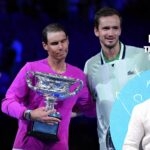 Eye of the Coach #45: How Nadal affected every part of Daniil Medvedev’s game
Next Social Highlights: Fedal is back, Djokovic as well and even Del Potro!
The figures

The 22-year-old, a semi-finalist at Wimbledon last summer, lost an epic battle with eventual champion Rafael Nadal in Melbourne but Mouratoglou believes the Canadian has the weapons and the mentality to win the sport’s biggest events.

“Denis Shapovalov will win Grand Slams,” the Frenchman says. “When you see him play,
he really wants it.”

Mouratoglou said Shapovalov is “probably at 60 or 70 percent of his potential” and that his attacking, aggressive game-style means he might take a bit longer to reach his maximum.

“He takes a lot of risk and I think it’s his game – that’s also why he needs a bit more time to deal with his incredible power, use it when it’s the right thing to do and use it a bit less when it’s time to put the ball in play.

“For his style of game, I think it takes more time. A bit like Stefanos Tsitsipas: those players that are much more aggressive , powerful and taking more risks. It takes more time, but the margin for progression is still incredible.”

And Mouratoglou said the fact that Shapovalov takes defeats to heart, even against the world’s best players, is a good sign.

“The fact that he needed, like three or four months to recover from a loss against Novak (Djokovic, in the semi-finals at Wimbledon last summer), I know it’s going to sound strange, but I see it as a very positive sign.

“I’ve seen players do a great result in one tournament and be extremely happy, and some others, (like)
Stefanos Tsitsipas in the past, same for Denis, it’s never enough. It was his first semis in a grand slam. He loses against probably the greatest player of all time, Novak, and he is destroyed.

“Same with Stefanos, when he lost in semi-finals of the Australian Open a few years back against Rafa. He was destroyed that he lost this match. That’s a good sign. It shows that they put their goals extremely high. 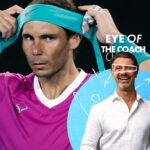