Match Points excerpt: Training for clay instead of playing in Miami, the right choice for Federer?

Former Wimbledon champion Marion Bartoli and journalists Ben Rothenberg and Simon Cambers debate how best Roger Federer might prepare for Wimbledon, having returned to the Tour this month after 13 months out injured. 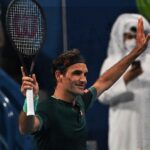 Match Points #24 : Where does Federer stand now ?
Next 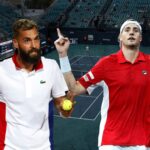 Match Points #25 : Paire and Isner, ATP’s pain in the neck
The figures

Having returned to the Tour after 13 months out through injury at this month’s ATP event in Doha, Roger Federer is to take some more time off to raise his fitness levels as he targets a record ninth Wimbledon title this summer.

Simon Cambers says he was impressed by Federer’s return in Doha and believes missing Miami was a smart move for the Swiss.

Rothenberg: Clay is the most gruelling surface

Ben Rothenberg is more skeptical of the decision not to play in Miami, and says clay does not make the most sense for Federer if he wants to win Wimbledon.

But former Wimbledon champion Marion Bartoli says training in hot temperatures in Dubai will help Federer, while clay can also be beneficial to Federer as he builds towards Wimbledon.