Social highlights : Federer is back at work, Nadal gearing up in New York

Take a look at the best tennis content posted on social media over the last few days including August 22, 2022, curated especially for you by Tennis Majors 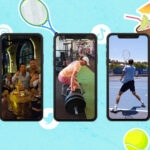 KEY MOMENTS OF OUR SOCIAL HIGHLIGHTS

15″: Roger Federer has published a video of himself… in training! The 41-year-old Swiss legend showed himself on his Instagram account on Sunday hitting three forehands. Looking forward to even more!

20”: Rafael Nadal is also on the court. The Spaniard is in New York, on Arthur Ashe Stadium at Flushing Meadows, for a first training session before the US Open.

30”: Caroline Garcia celebrates her coronation at the Cincinnati Masters 1000! The Frenchwoman has appeared several times with “her” trophy!

1:30: Belinda Bencic and Donna Vekic go the comic route. The two players imitate the differences between the handshakes, at the end of a tennis match, between men and women.