Tennis Majors’ Editor-in-Chief Cedric Rouquette talks to Max Whittle about Medvedev’s journey in the latest episode of “The Volley” podcast. 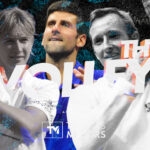 Djokovic and the calendar Grand Slam, tennis’s ultimate achievement – The Volley Podcast #13
Next 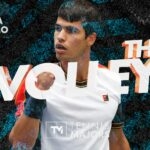 Carlos Alcaraz: The 18-year-old sensation on a mission to be the best – The Volley Podcast #12
The figures

Daniil Medvedev, one of the most talented and enigmatic players on the tennis tour, plays Novak Djokovic in the highly anticipated US Open men’s final on Sunday. The Russian, playing in his third Grand Slam final, has proven that he is one of the best hardcourt players in the world over the past few seasons but faces an uphill battle against arguably the Greatest of All Time – Novak Djokovic.

Medvedev has a 3-5 record against Djokovic, who is aiming to win a record 21st Grand Slam singles title and the calendar Grand Slam on Sunday (the pair have split their last six meetings).  And while we look ahead to the final, Tennis Majors’ Editor-in-Chief Cedric Rouquette talks to Max Whittle about Medvedev in the latest episode of “The Volley” podcast.

Everything from Medvedev’s unorthodox style of play to his coaching set up with Gilles Cervara, how his relationship with mental coach Francisca Dauzet to his relationship with the US Open crowds, as well as his growing appeal with tennis fans and brands across the world comes up for discussion during this podcast.

The highlights from the discussion on “The Volley” podcast about Medvedev

• Where Cedric is speaking from : The Le Petits As junior tournament in Tarbes, France (around 2.00)

• Daniil Medvedev’s mental prowess and the characters involved in his team, Gilles Cervara and Francisca Dauzet (around 5.25)

• The enormous mental potential of Medvedev as Cervara and Dauzet describe it (around 13:38)

• The fascinating aspects of Medvedev’s personality, according to Cedric : a simple guy just playing tennis and trusting the process (around 16:55)

• Medvedev’s relationship with the US Open crowds, which began with the infamous booing incident during the 2019 US Open (around 19: 20)

• The growing appeal of Daniil Medvedev to crowds, younger fans and brands across the world (around 23.00)

•Medvedev’s unique and unorthodox style of play (around 26.45)

• Cedric’s thoughts about the 2021 US Open final between Djokovic vs Medvedev final (around 32.36)