“Djokovic played with fire and got burned”- Match Points excerpt

Ben Rothenberg and Marion Bartoli continue their discussion with Josh Cohen on whether it was correct to default Novak Djokovic from the US Open. 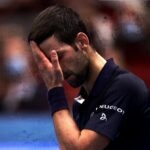 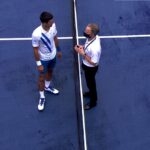 “Hitting a ball around a court, it’s something we’ve seen from Djokovic, but also from other players”- Match Points excerpt
The figures

Former Wimbledon champion Marion Bartoli thinks that it was entirely the correct decision to default Novak Djokovic from the US Open, after the Serbian struck a lineswoman in the face during his match against Pablo Carreno Busta.

“Absolutely. The rules are absolutely clear,” Bartoli told Ben Rothenberg in the latest edition of MATCH POINTS on TENNIS MAJORS.

“And as an ex-player, the first thing that you learn when you arrive on the WTA Tour and when you get from the junior circuit to the pro circuit, the first lesson you are told and the first rule everyone is telling you is that if you hit someone, with intention or without intention, it doesn’t really matter, but if the ball bounces five or six times before hitting somebody it’s a different case. But if it’s a straight hit, no matter what your name is, or what your ranking is, it doesn’t matter. You’re going to get defaulted.

Bartoli went even further on the matter, adding that Djokovic perhaps has to find a way of controlling his emotions better as he continues the goal of breaking more records.

“And that’s part of controlling your behaviour. I think Novak from the beginning of the US Open was probably disturbed by a lot of things going on outside of the court, and this new role he has taken and that he was a major favourite in that grand slam, probably even more than usual, things going on outside of the court, I think the whole thing started to increase inside of him and lead to that behaviour as well.