“Hitting a ball around a court, it’s something we’ve seen from Djokovic, but also from other players”

Ben Rothenberg talks to Josh Cohen about Novak Djokovic’s behaviour on the court during his last US Open match. For him, it’s something we’ve already seen from Djokovic but also from other players. 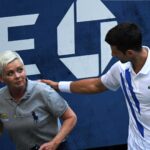 “Djokovic played with fire and got burned”
Next 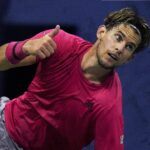 Aside from there being three mothers in the quarterfinals of a grand slam tournament for the first time ever, the biggest talking point of this year’s US Open behind closed doors has been… Well, you know the story by now.

It is, of course, world No.1 Novak Djokovic’s amazing default from the tournament after striking a ball in the throat of lineswoman Laura Clark. Was it an accident? Should he have been defaulted? It certainly was a fit of pique.

Ben Rothenberg talks to Josh Cohen about Novak Djokovic’s behaviour on the court during his last US Open match. For him, it’s something we’ve already seen from Djokovic but also from other players.

“Well I do agree there’s a lot of bad luck involved in this, obviously hitting the woman in the throat unintentionally,” said Rothenberg. “However, with a lot of tennis players, Novak included, there’s been an incredible amount of luck for tennis players for years when they hit the ball around the court recklessly and happened not to hit anybody.

“Eventually, you’re going to get unlucky when you’re this careless with your balls, and even earlier in the set when hit a ball much harder I think at 4-5 into the sidewall it didn’t hit anyone. But, you know, it’s something we’ve seen from Djokovic for sure and other tennis players as well.  They throw their racket around the court, they smack balls around the court, not always being conscientious or careful with the fact that there are sometimes ten or twelve people on the court between ball kids and people as well.”