Patrick Mouratoglou believes that Serena Williams, who was forced to retire during her first round match at the All England Club, was ready to win Wimbledon again. In an exclusive interview with Tennis Majors, he also details proposals on how to increase safety for players on indoor grass 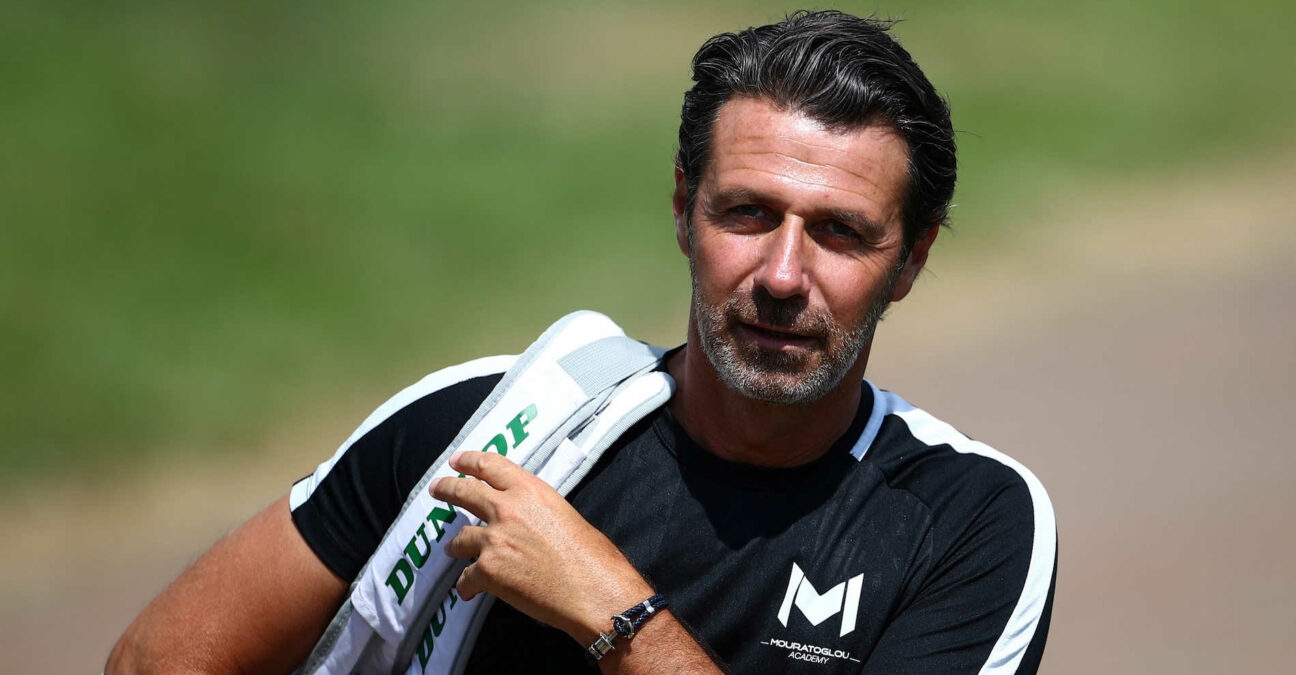 Aside from a short emotional message on social media, Patrick Mouratoglou has been mostly silent since Serena Williams’ shocking first-round retirement at Wimbledon on Tuesday, which came just a few minutes after Adrian Mannarino’s withdrawal against Roger Federer following a bad slip on the wet indoor grass. While the two events may be unlucky after all, that may not be the only reason, says Mouratoglou. In this exclusive interview, he shares ideas on changing regulations on grass shoes to increase player safety.

On Thursday, following a final debrief with Serena, who flew to the United States right after, the French coach took his time to tell the story of this latest setback in Serena’s quest for Grand Slam #24, a pretty difficult once since her return from childbirth in 2018. But Serena is already preparing for the US Open next month, where her chances to win create no doubt in the mind of Patrick Mouratoglou, one of the co-founders of our website, Tennis Majors.

Patrick, what were your emotions and thoughts when you saw Serena Williams retiring against Aliaksandra Sasnovich?

The first emotions I felt were her emotions. I’m so connected with my players that I feel their emotions more than mine. In other words, my emotions are the consequences of theirs. I was hit full force because Serena was overwhelmed by emotions. In the box, we could not understand everything at first sight. We didn’t see her fall, we needed the slow motion to figure it out. At the time, we just saw Serena stopping. We thought she missed a shot because of a false bounce, or she was disturbed by something on the surface. Nobody knew how serious it was. Then we saw that she served without her legs and didn’t even try to play balls that were one-meter away. At that point, we knew it was so desperate. If Serena does that, it means that the tournament is over. The emotion was so intense because she knew it.

It was very intense, very spectacular….

Serena expected a lot from Wimbledon. In her head, she was going to win the trophy. Her preparation had been very good. She was ready tennis-wise, physically, and mentally. In the first rallies, the energy was so good, so much better than Roland-Garros. She’ll be 40 soon (September 26, editor’s note). She doesn’t know how many Wimbledons she will play in the future. Probably not that many, you can’t be sure there will be another one. So many feelings going on in her head in a small amount of time.

It was just the two of us driving out of the stadium, and her only questions were how to bounce back. Rewriting the story was not her business.

Was this one of your saddest moments together?

The 2018 US Open was another level of this kind (when she was runner-up to Naomi Osaka, editor’s note). We have more negative emotions than positive at this stage of a career. A real joy, when you’re Serena, is only when you win a Grand Slam, and we are waiting for that moment now (since the 2017 Australian Open), whereas the first five years (together) were full of ecstatic joys (10 Slams between 2012 and 2017). That’s part of the job and there’s nothing we can do about it now, this retirement belongs to the past. I must say that Serena spontaneously turned the page. It was just the two of us driving out of the stadium, and her only questions were how to bounce back. “What’s the next step? Where should we do the MRI? etc.” She was in the solution mode. Rewriting the story was not her business. That’s why she’s so strong.

Is this injury, on the right thigh, worrying for the rest of the season ?

We don’t know for the moment, we are expecting the result of the clinical assessment. The manual test gave us an idea of the nature of the injury, not how serious it is. We’re waiting to see for how long she’s supposed to be resting and, obviously, the consequences in terms of preparation for the next one, in nine weeks. Time will fly. She’s walking, which is a good sign, and it excludes very bad possibilities.

I really think a serious discussion must start on shoe’s pimples, with reconsideration for the player’s health as a top priority.

Adrian Mannarino had just retired because of a slip. When Serena’s match started, did you have fear of any kind, because of her own injury on the right thigh, where she was bandaged? Or because of the court conditions?

Yes, clearly, there was anxiety. It was not related to her eventual injury. This right thigh injury was there even before the French Open. It was painful in Paris, but it was under control in London and there was no fear anymore there. If I was anxious, it was related to the ground conditions. This court has been dangerous since the beginning of the tournament. Everybody fell on this Centre Court on Monday and Tuesday, and (Nick) Kyrgios was very close to a bad injury on Court No 1. Where the players slip is where the court is covered. If Novak Djokovic wasn’t incredibly elastic, he could have been injured also.

But the real concern is less the court and more the shoes. Let me describe you a tennis shoe made for grass. It’s full of pimples. Without those, playing tennis would be like ice skating and straddling when you want to run. But the rules and regulations of Wimbledon forbid pimples on the side of the shoe. But you have to know that most of the falls on grass are due to a side support. When the players change direction, their reflex is to push the inside of the foot. That was clearly the motion in the falls of Mannarino’s and Djokovic.

If you don’t have pimples there, the foot is giving way and here comes the split. That’s a reflex, you can’t help it. I really think a serious discussion must start on this topic with reconsideration for the player’s health as a top priority. My point here is a global observation, concerning issues we have also had in previous years. Serena’s slip was on the bottom of her foot, let’s be clear. But yes, shoes with pimples on the sides are the way to keep the players standing on grass.

The All England Club states that the grass is exactly the same as normal, but the wet weather conditions are not common. Is that your feeling on the courts?

The dangerous courts are courts with a roof. So if it’s wet outside, I’m not sure that this is the point. What I can see is thousands of people there breathing. It leads humidity rising, hitting the roof and falling on the court. In Halle, you have air conditioning on the ground that keeps the grass dry in real time. The Wimbledon roof is clearly needed but a system to keep the grass dry is needed also. 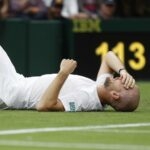 On Facebook, you wrote that Serena was "ready". Did you mean ready to win 2021 Wimbledon ?

Absolutely, she was. It wasn’t always the case in recent times. For instance, she was not ready enough for the French Open, sometimes the preparation is tricky because of physical issues here and there. She was absolutely ready at the Australian Open, where she moved very well. What she missed is what leads her to be Serena, I mean : refusing to lose and suddenly playing at another level in the crucial moments. For a couple of years now, my quest is to understand why she couldn’t rely on that anymore. Now I found it, and it was the day before the first round. Serena was ready to show it at Wimbledon. I know her by heart, she was that strong at the beginning of the match and she was ready to use what I consider as a superpower when needed. She felt that also.

Do you know why she skipped the press conference?

She was under medical care, she couldn’t walk well, I never imagined she could go to any press conference.

Was it a way to avoid questions on an eventual final Wimbledon, and the emotion related to that, like in Melbourne?

I don’t think so but I’m not keen on answering for her. I didn’t ask her. I don’t know either what she thinks about having maybe played her last Wimbledon. So many different things will decide that. She obviously knows that the end is much closer than the beginning of her career. If she had anticipated an eventual overflow of emotion if she was questioned about a last appearance there, I would find that totally understandable. I consider her chances at the US Open as equal to her chances at Wimbledon.

What do you know about the plans before the US Open?

It depends a lot on the medical results so it’s hard to say. I was supposed to fly to the United States at the beginning of August for the preparation. We would have played one or two WTA tournaments. I hope we can do one, reasonably, probably Cincinnati. But the plan, once again, is connected to how long she can’t play.

A lot of pundits, including ours here at Tennis Majors, think that Wimbledon was her best chance. Is that your opinion as well?

No. Why would we think that ? You can say that for Roger Federer. He has to play five-setters every two days, possibly against players like Novak Djokovic. It’s so hard when you’re almost 40 and the grass is clearly a surface to make the rallies shorter. Serena plays three-setters. The physical part is there but less important. Serena won as many Australian Opens on hard as Wimbledon on grass (seven). Stats are clearer on the difficulty to win Roland-Garros (she won three times), and clay is more demanding when you’re almost 40, yes I admit that. What else? Grass highlights Serena’s qualities, that’s true, but nobody says that it’s difficult to move on grass. I consider her chances at the US Open as equal to her chances at Wimbledon.