Tennis Majors > WTA > Kovinic, from a flood of tears to renewed ambition

Kovinic, from a flood of tears to renewed ambition

Montenegrin Danka Kovinić, who recently reached the final of the Volvo Car Open, details the influence of Jelena Janković and Janko Tipsarević on her career, recalls the sponge ball beginnings and talks about the darkest hours a tennis player can endure 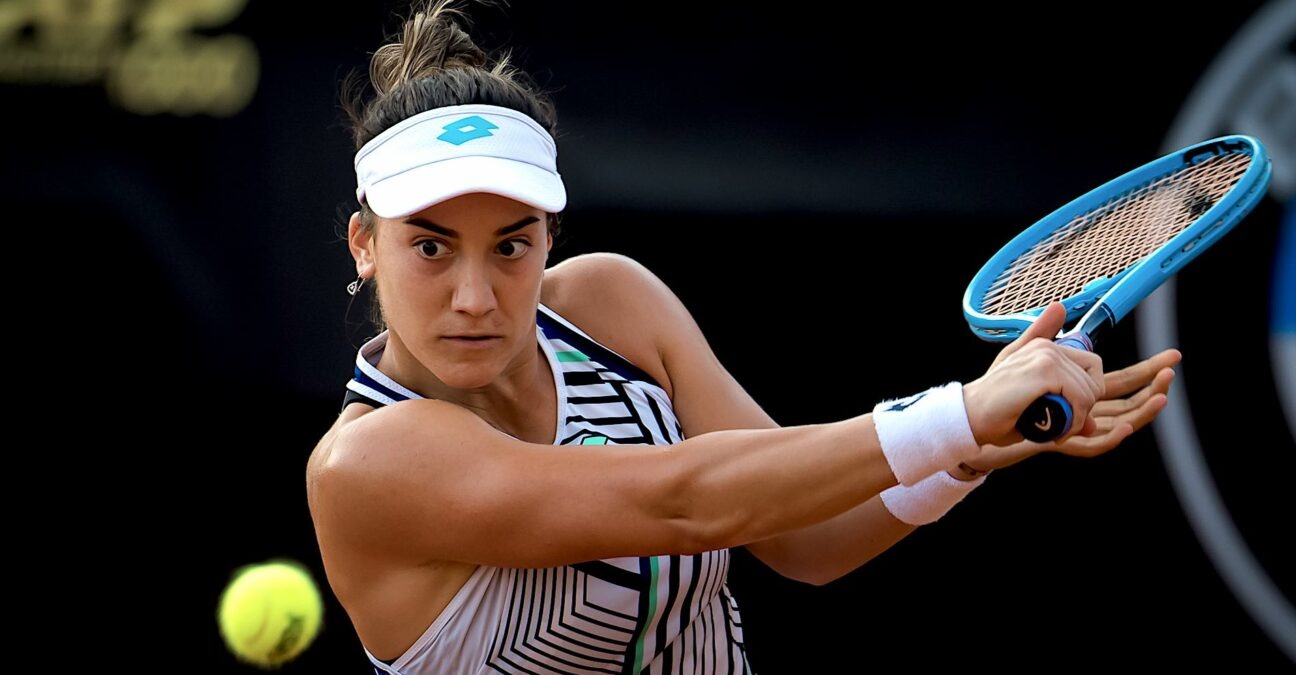 Tennis works in mysterious ways. In Charleston in 2017, Danka Kovinic hit rock bottom after she lost to Danka Kasatkina. The Montenegrin player felt “broken”, wept for hours and even got a fever on her way home because of the state that she was in. “I think it was some kind of a nervous breakdown”.

Fast forward four years to the same place in South Carolina, and Kovinic, now aged 26, is living the best two weeks of her career. First, she reached her third WTA career singles final at the Volvo Car Open beating up-and-coming Leylah Annie Fernandez, Petra Kvitova and Ons Jabeur on the way, before losing to Veronika Kudermetova.

The following week, she scored three more wins at the MUSC Health Women’s Open, reaching the semifinals before losing to Jabeur.

Those two weeks came as a surprise even for Kovinic herself, as she struggled with back problems that had forced her to withdraw from Monterrey and Miami. She went back to Belgrade for treatment, but did not feel fully fit at the start of the Volvo Car Open.

“After I fought through the first match, I felt that I could play without pressure”, Danka Kovinic told Tennis Majors. “Winning against Fernandez gave me a boost and suddenly all the shots felt great coming off of my racquet. I had two tough losses against Kvitova in the past (Danka served for the win at Roland-Garros 2016), but I have always played well against her. In Charleston, I was solid and I did not make many errors. After that match, my confidence kept growing with each good shot”.

From Herceg Novi to Belgrade

Kovinic grew up in Herceg Novi, a small, but beautiful and picturesque city at the Montenegrin seaside. According to her own words, Danka was a hyperactive child looking for fun. There were always kids around the local tennis courts, so she asked her parents to enroll her at the club at five years of age. The region of former Yugoslavia is known for success in team sports, which have a different, more social dynamic than individual sports, so her parents wanted to pursue one of those but Danka persisted.

“They listened to my wishes two years later, but I did not sit doing nothing all day; you could see me all the time in the entrance of our building hitting a sponge ball with a plastic racquet”, Kovinic recalled laughingly, “I think my mom still keeps that racquet somewhere in the house”.

From there, it all started to unfold rather quickly, as Kovinic moved with her parents to Belgrade when she was 10. In the Serbian capital, she started to work with coach Veljko Radojicic, who turned out to be probably the most important person in her career.

“I really feel that I have the perfect technique with my shots and I owe it to Veljko”, Kovinic named one of the many things Veljko taught her, and she referred to him numerous times as “part of the family”.

Jelena Jankovic as an idol and a mentor

As she was spending a lot of time in Belgrade, Danka grew close with all the Serbian players, but she made a special bond with former world No 1 Jelena Jankovic, who Radojicic used to coach as well. Conversations with Jankovic were particularly important as Danka was only 12 or 13 years old at the peak of Jelena’s career.

“We were friends more than we were colleagues. Jelena was my idol growing up, and she was always willing to share her experience and knowledge. Just being around her, watching her routines and practicing with her meant the world to me. I tried to soak it all up, she helped me a lot, particularly in the early stages of my career”.

Working with Radojicic, Danka achieved the best results of her career: runner-up finishes in Tianjin 2015 and Istanbul the following year, when she soared to a career-high No 46 in the world.

Still, after 11 years of working and traveling together, both Danka and Veljko felt they needed a change. Before starting the conversation about splitting up, Kovinic was beating herself up for months, but in the end they did split up. Being so accustomed to hearing the same voice in her corner, Danka struggled with finding the right coach and her ranking plummeted to around No 200.

Maybe it took longer, but it is sweeter this way as I have gotten to know myself really well”

“It came to a point where I could not hit my forehand properly because I was so insecure and always second-guessing everything. Normally, I do not pay attention to the rankings too much, but during that year-and-a-half, I would find myself thinking: ‘Oh, no, I am going to fall even more'”.

The worst part about it was that Kovinic kept putting in the hours and the necessary effort, but yielded no rewards (“you feel worse with every week”). Danka is particularly proud because she was able to deal with that storm of emotions mainly by herself. “Maybe it took longer, but it is sweeter this way as I have gotten to know myself really well”.

Despite her mom suggesting she talk to a psychologist, Danka never worked with one permanently. It was almost a twist of fate when she ran into a WTA psychologist in Beijing.

“She asked me how I was doing. I was on the verge of falling apart and I could not hide the tears. So, we talked and I could not stop crying. She is a wonderful woman. I got encouraged that day by her telling me to relax, that everything that I am experiencing is normal. I remember her saying: ‘You should just see the big names that have come to talk to me'”.

With time, Danka learned how to take losses in stride and and her career, in general, more rationally. “Yes, I was too emotional, taking every loss too close to heart. After what happened in Charleston (in 2017), I told myself ‘never again'”.

It did take time, but Kovinic found her home with Janko Tipsarevic Tennis Academy, with the former world No 8 serving as her mentor since March 2019.

“His perception of my game, the way he thought I should play helped me a lot. Janko told me to stay aggressive with my shots, but not to try to finish off points after 2-4 shots constantly, which I used to do, I was taught that way. To some degree, I was shying away from long rallies thinking I cannot play in that way”, Kovinic said before adding:

“Janko convinced me otherwise, now I feel I can stay in long rallies for several games if I need to. That is a way to raise my game and to put additional pressure on opponents. For instance, I try to take care of getting as many returns as possible, and not going for broke all the time. I still try to dictate rallies, but I am being more patient now. Janko made me see my game more clearly, now I know what I need to do all the time”.

Top 50 and third round of a Slam

Kovinic has been working with the coaches from the Academy – Vuk Bolic at first until the US Open last year and Nemanja Plavsic since then. “Nemanja is very devoted. He is scouting opponents better than any of my previous coaches. He is preparing me tactically in the right manner for matches. We are a great fit on a personal level as well”.

Kovinic currently sits at No 62 in the world. In the past, she was shy about her ambitions, but that is not the case anymore. Since her breakthrough wins in Charleston, Kovinic has been dealing with some niggles in her calf, but she expects to be ready for Roland-Garros.

“Now, when I say that I want to be a top 20 or a top 30 player, I actually believe it, I believe that I belong there. But firstly, my goal is to get back into the top 50 and I would like to advance to the third round of a Slam (she has lost five times in the second round),” Kovinic concluded.

Even if she does not succeed in reaching the third round in Paris, Danka has learned the virtue of patience combined with hard work. It always pays off in the end.