Osaka overcomes Gauff in three sets to advance in Cincinnati

Naomi Osaka kicks off her Cincinnati campaign with a three-set win over Coco Gauff on Wednesday. Osaka awaits Jil Teichmann in the round of 16.

It has already been another tumultuous week for Naomi Osaka, who was reduced to tears during her pre-tournament press conference.

Osaka faced some on-court adversity in her opening match at the Western & Southern Open, as well, but she passed the test with flying colors by beating Coco Gauff 4-6, 6-3, 6-4 during second-round action on Wednesday afternoon. The world No 2 stuck 11 aces and benefited from eight double-faults off Gauff’s racket to prevail in one hour and 52 minutes.

Osaka actually trailed by a set and break, seemingly on the way out of Cincinnati after just one match. Gauff had a chance to consolidate her 2-1 advantage in the second, but she failed to convert a game point that would have given her a 3-1 lead and was eventually broken. That proved to be the turning point, as Osaka never dropped serve again the rest of the way.

A double-fault by Gauff on break point gave her opponent a 5-3 lead in the second set and the 17-year-old American was broken again to begin the third. Osaka consolidated that lead the whole way, finishing off the proceedings with a love hold at 5-3 — and an ace at 40-0.

“Whenever I play [Gauff], it’s definitely always very tough,” the 23-year-old from Japan commented. “I felt like today the match was very serve-reliant, so I’m very happy that my first serve didn’t let me down.”

Next up for Osaka is Jil Teichmann, a 6-1, 6-4 winner over American wild card Bernarda Pera.

Other winners in the early afternoon on Wednesday were Petra Kvitova, Elena Rybakina, Angelique Kerber, and Karolina Muchova. Rybakina ousted No 14 seed Elise Mertens, Kerber outlasted No 4 Elina Svitolina in a tough three-setter, and Muchova beat No 7 Bianca Andreescu. 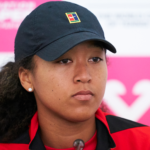