Yunosuke and Koujirou Owaki are true phenomena with their racquets. We met them on their first trip to Europe, where they were invited by their idols Stefanos Tsitsipas and Novak Djokovic 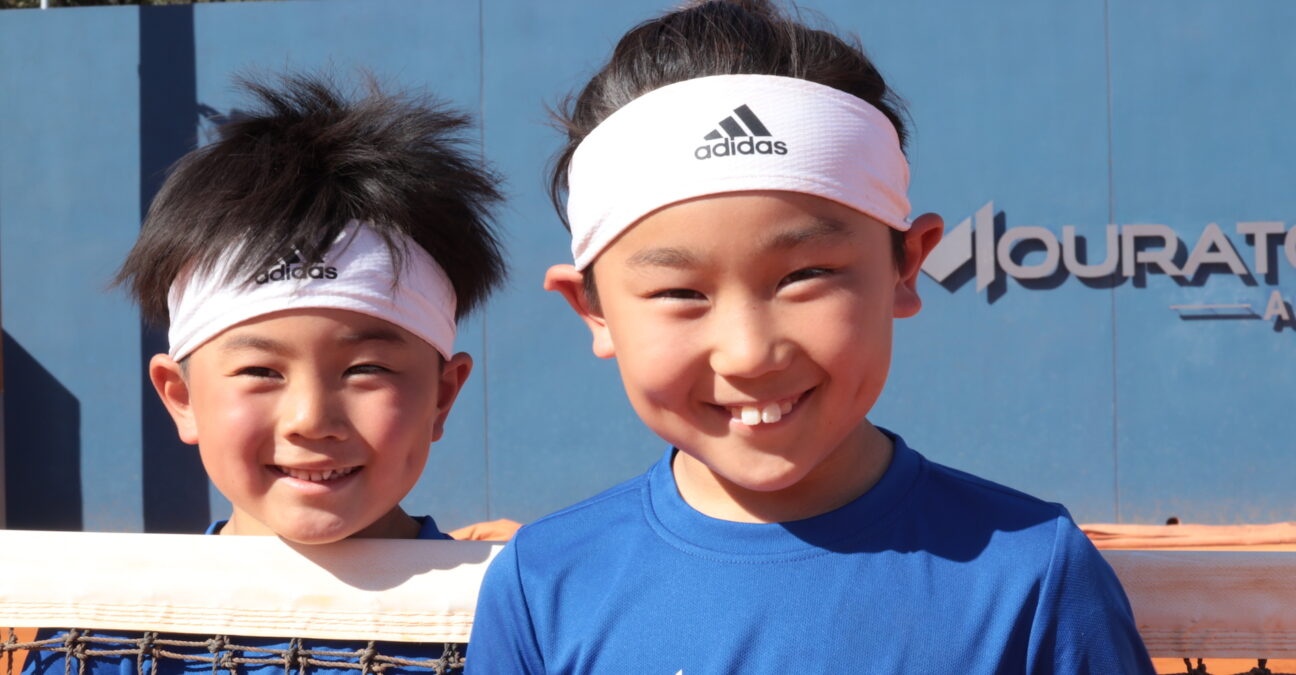 Yunosuke and his brother Koujirou Owaki are just like any other kids. They gorge themselves on sweets and fizzy drinks at snack time. They give their parents loving looks with the same spontaneity as they breathe. They squabble over who gets to use which toy first. They have a little trouble concentrating when asked to do something unusual, like a photo shoot.

They are just like any other children, with that extra something that brings them closer to child-star status: they play tennis with amazing dexterity.

The brothers “play” tennis in the full sense of the word; they “have fun” with the racquet and the ball, carried by the inexhaustible energy of their ages – six and eight – and this, we are told, without suffering from jetlag.

Yunosuke and Koujirou have just travelled outside Japan for the first time in their lives, with their father, Kosuke Owaki, a salesman for a metal company, and their mother, Minako Owaki, a secretary in an underwater pump company. They are both 35 years old.

As you read this, the Owaki family has just returned home to Mizumaki, in the north of Japan’s southernmost island, Kyuchu, after 20 days in Europe: three dream weeks for Yunosuke and Koujirou, broken down as follows: two weeks on the French Riviera, first at the Mouratoglou Academy for a week of training and then to attend the Monte-Carlo Masters 1000, then to Belgrade to attend the ATP 250 event in the Serbian capital.

As if in a dream, they were invited by their idols, Stefanos Tsitsipas, Yunosuke’s favourite player, and Novak Djokovic, Koujirou’s favourite.

The one-handed backhand of some (Yunosuke and Tsitsipas), the two-handed backhand of others (Koujirou and Djokovic): these technical gestures, unheard of in terms of precision and commitment for such young players, made the Owaki brothers famous during the spring 2020 lockdown.

“Everyone knows them in Japan – the parents were very surprised that people know them in Europe. They couldn’t guess,” says Masashi Ogawa, the agent who is now accompanying them as they soak up the attention, which has already earned them 25 interviews in their home country. “People ask a lot of photos. The parents are amazed at how much people recognise them.”

That’s the miracle of social media. The Instagram account, where the father regularly posts samples of his children’s drills, practices and the occasional match, gives the distorted impression of a life devoted to tennis.
But the two brothers don’t play much.

“Twice a week, and only two hours a month with a tennis coach,” the parents tell us.

Mizumaki is a medium-sized town (30,000 inhabitants) with a mining tradition, where tennis is almost foreign. This explains why most of the videos are set in a local car park or even inside the house. The J Struct Tennis Club, where they train, and the Tagawa Tennis Club, where the family travels for leisure, are an hour away.

Will the Owaki brothers be in competition soon?

The eldest, Yunosuke, is old enough to start competing. He played his first tournament in the summer of 2021 but he is the exception that proves the rule.

“In Japan, the only tournaments open to players his age are in the Osaka or Tokyo area,” says the family; both those areas are a plane ride away.

“If they can and if they wish, yes [we can think about a career in tennis], but we want the kids to enjoy. At the moment tennis is not very serious, they just play,” says their mother.

“They tried a lesson in the club nearby. The kids enjoyed it. Everyone said they were very good. The coaches said that. They were excited so they started.”

One thing is for sure: if their movements seem extremely precise and promising for their age, based on the videos in circulation, you are not being deceived. What Yunosuke and Koujirou Owaki are doing is exceptional.

“At this age, I’ve never seen anything like it,” says Patrick Mouratoglou, founder of the academy that bears his name, current coach of Simona Halep, co-founder of Tennis Majors and founder of the ChampSeed Foundation, which finances the dreams of young players from the age of ten. “Their level, I explain it by a lot of work, especially mime. Their parents told me that they practised a lot of empty gestures (practice swings), like a pianist practises his scales. I think they also have a lot of natural talent. There is exceptional timing in their movements. They know how to play half-volleys, they know how to play high balls, there was a lot of wind during our session and they adapted without any problem.”

Some amazing short cross-court forehands or clear backhand passes along the line confirm the observation.

However, Yonosuke and Koujiro are still light years away from becoming champions. “The most important thing to progress is to play a lot of matches,” explains Mouratoglou. “Winning is what a tennis player is all about, and you learn by doing it. But they play few or no matches. At this stage, they love to play, you can see that, and that’s the most important thing. If they like it, they will progress. They have the technique, but it’s just a tool, which is not enough. Success at the top level is a question of motivation and personality. It takes years to train a competitor.”

Do they have a taste for competition? Yunosuke clenched his fist a lot during his first matches, the family tells us. How will they react to young opponents who, no doubt, will want to add the name of the little Instagram geniuses to their list of achievements? At this point we have to be content with supposition.

“I am their only partner,” smiles the father, Kosuke Owaki. “They want to play more. I don’t rule out moving to make things easier, why not abroad, why not here?” he says, in the cafeteria of the Mouratoglou Academy. “We’re looking at how to do it.”

When they have training matches, there is no bickering. The older boy usually wins by a narrow margin, despite being at a disadvantage with the (handicap) scoring system.

The celebrity of the two boys has brought them some local sponsorship, flexibility from their parents’ employer, support, the details of which are not known, from Wilson (now in the account’s bio) and Adidas (which has no right to do so). It is understandable that the Owaki family no longer has to worry about the equipment, but the European experience that Tsitsipas and Djokovic have just given them cannot become a way of life.

For now, the two boys are enjoying their first trophies: autographed polo shirts and racquets from their idols, hugs and selfies with their favourite stars, the friendship of Djokovic’s eldest son Stefan, with whom they are playing, and the first seats in the stadium. Monte-Carlo and Belgrade were their first high-profile matches seen from the stands.

Their stamina in following the matches without the dispersion that their age would justify – they have a perfect command of the rules – is another fascinating manifestation of their love for tennis.

Patrick Mouratoglou recently had to answer questions from the TV channel Canal+ about the possible overexposure of these children who have just started school.

“There is a risk in exposing them, yes, but the parents don’t have much choice,” the coach replied. “In tennis, the financial need is enormous. You need a coach, a physical trainer, you need to pay for trips to tournaments. Almost no parent has these means. Publicising your children when they are impressive can help to find these necessary means.” The parents vow that if the boys want to quit tennis tomorrow, there will be no problem.

The Owaki brothers seem light years away from such considerations, far from the great players our adult eyes spontaneously want to see in precocious talent. They are kids who are lucky enough, with their natural ability and the encounters that Instagram has allowed them to make, to live their dream to the fullest.

Living in a tennis-free territory, where playing on a standard court is impossible, seems at this stage more like a chance. You can’t dream about something that you find every day on your doorstep.