Grigor Dimitrov and Covid-19: His full interview with Tennis Majors

Grigor Dimitrov admitted he was still dealing with the effects of coronavirus after testing positive for COVID-19 last month. Our full interview with the Bulgarian from UTS2. 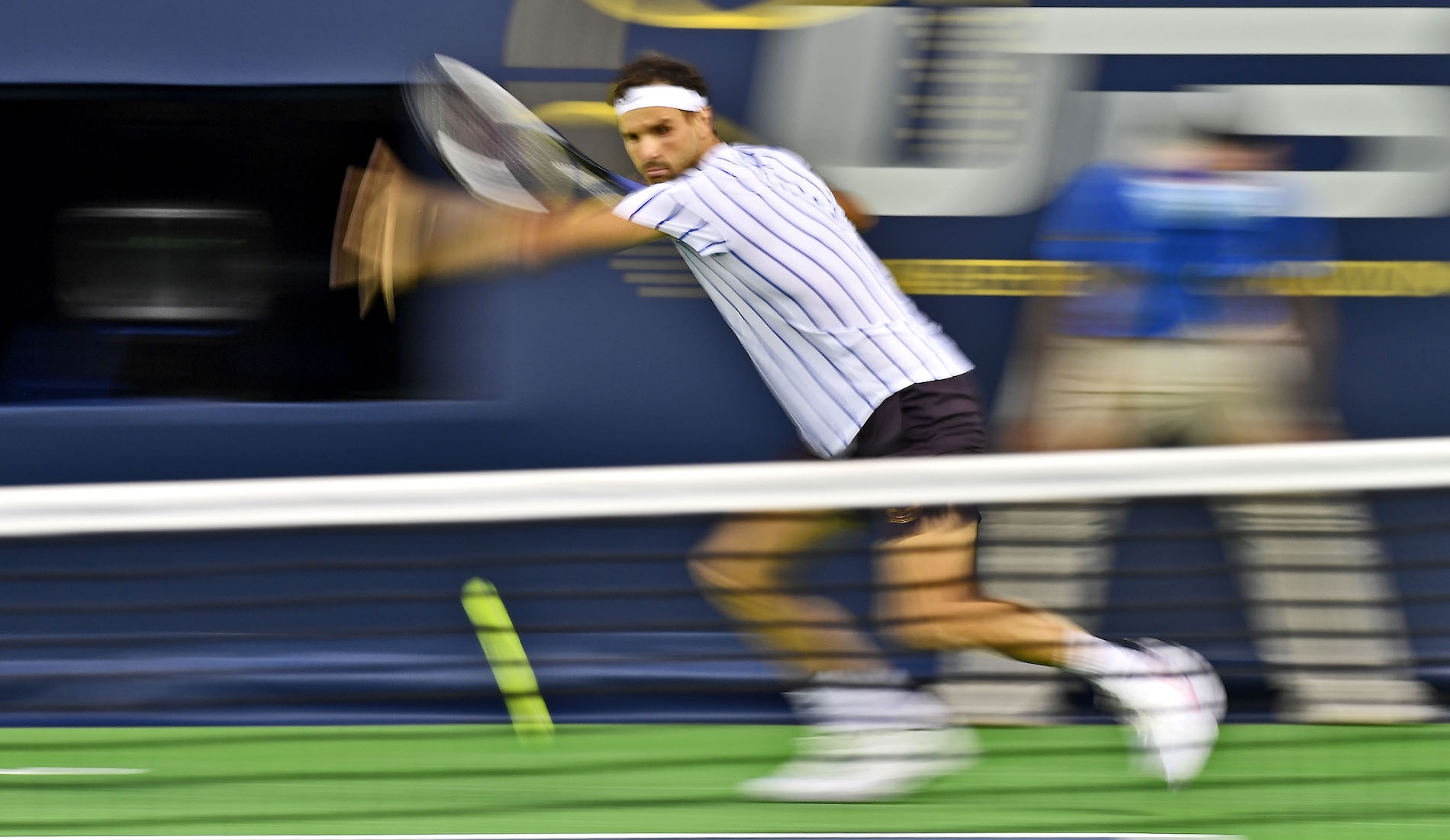 Every loss is difficult. I came in honestly with no expectations. I haven’t practiced for that long. I’m just trying to focus on the format and enjoy it. Clearly I’m not ready to compete at the highest level right now. The movement is getting better; everything is kind of going in the right direction but it’s still not easy to recover. I’m far (from my best level), for sure.

You ended with a double-fault (in your loss to Lopez). Does that indicate that the match had the taste of competition – a real competition?

Oh, I think for us it’s always about competition. It doesn’t matter if it’s if it’s here or somewhere else or the level. You know as I said I have not I have not been on the court much so of course I don’t control my shots the best that I can. I haven’t played at night at all, as well. These are my first matches back. But obviously no excuses. I need to take the positives out of it. This gives me a little bit of homework to go home and to practice a little bit more, have a look what I can improve and also spend the hours working on my fitness. I had a problem with the shoulder last year and now the virus and everything. So you need to find a way to progress and staying positive is one of the most important things especially in events like this.

You had a lot of ups and downs (in your loss to Richard Gasquet on Friday). How would you assess your performance between yesterday and today?

I want to stay positive right now. It’s definitely not easy when you come back in a place where the format is like it is. It definitely tricky [against Gasquet] and I was trying to change things up [against Feliciano Lopez]. It’s clearly a shame today. I obviously wanted to win; I think I had the opportunities, but obviously I’m not ready to compete at the highest level. I don’t shy away from that. I admit it. Being home for so long never I think never helps. There is a lot of work to be done, but for me and as I’ve always said in in my career so far is that health has always been my number one priority.

How do you feel physically?

A little tired, I’m not gonna lie, which is kind of normal. Obviously the format here, it’s taxing because those 10 minutes… you think they’re going fast, but it’s like also with (only) a 15-second break (between points). It was important for me to see also how I feel physically, to see how I feel and where I can progress. Obviously other than that, I still have a lot of work to do. It’s just that I’ve been practicing only for a week. I’ve lost about three kilos, so the buildup for me is gonna take time. I’m definitely not ready to compete at the highest level. Part of what I love doing out there on the court is to run and find a way, beat a lot of players with my physicality. Right now I cannot put everything together, so I need to I need to work with what I have.

Dimitrov : “The virus was hard on me. I stayed home for about a month. So what can I tell you? It’s a tough road back.”

How far are you from your best form?

I think pretty far. I mean I haven’t I haven’t played tennis for over a month now. The virus was hard on me. I stayed home for about a month. So what can I tell you? It’s a tough road back and unfortunately this is this the way that I have to go through it now and hopefully I’ll be ready to bounce back.

How long and how hard could you practice?

I’m just trying to put in effort every single day. Even if I’m tired or not, to keep progressing. One day I feel really well and I have I have about four hours to be out. But then all of a sudden I need to completely shut down take a take a nap or just rest. So I have to go through that process as much as possible. Hopefully I’m going to recover fully…. The format (of UTS) is actually fun just to see how your cardio is going and everything else, but (I was) very, very unfortunate today again. I mean, I had I had the opportunities just I wasn’t able to capitalize.”

You said COVID was “hard on you“. Can you describe it?

I think it’s different for everyone. I was not breathing well. I was tired. I had no taste; no smell. Everything you could possibly think of. So it was no fun. To be honest I’m lucky to be on the court right now. I don’t take each day for granted. I really appreciate being here. It’s so nice that during time off you can come out and play with your competitors.

Did you have time to worry that it was very, very serious?

Of course. I was alone 20 days, for about 24 hours. You can do the math; I spent over 5000 hours by myself. A lot of things are going through your head. It doesn’t matter how mentally strong you are, as a person, athlete, or anything. It’s inevitable to have some bad thoughts in your head. I had to deal with that, too. So does everybody else out there. That’s one of my biggest messages: we should not underestimate the power of the mental state that everybody is in. If we take the right precaution and everybody is safe, things will get better quicker. But it’s a strange time. You have to work on your physical (health) but on your mental aspect, as well.

About the format of UTS, what do you think about on-court coaching that Patrick (Mouratoglou) is very keen about? What would you think if that if it was introduced on the tour?

Personally I never liked things to change. It’s funny because I’ve spoken about the same thing with Patrick, and me and him see things a little bit different when it comes to that. I always like to think it’s a great idea, but from my personal point of view I wouldn’t want to do that. And the reason for that is just because this is how I’m taught since I was a kid. You’re out there on the court, you’re on your own, you need to find a way. I know it’s one of the loneliest places on Earth when you go between those lines out there, but I think that’s also the passion of the game – for us of one of the trickiest parts is to find our way, how to beat the opponent, and all that comes with the mental aspect. Tennis has become such a mental sport. Everybody can hit a forehand and backhand and everybody moves well, so there’s so many things that everybody can do. And yes, maybe with a few tips here and there things could be different on court with coaching. But I’m a big fan of just finding a way out there.

Do you think that it’s not the better player who would benefit from it the most?

Everybody is very different and very personal when it comes to coaching. I think in particular some people, for example, love to have interaction and some people just want to have a couple of people around them. So given those circumstances, I think everybody chooses a different approach. I’m just speaking on my personal opinion on this matter.

Would you like to incorporate any of the concepts in UTS in the traditional tour?

That’s a very good question. Honestly, I’ve not thought about it. I kind of like the normal thing.  But this format does make it interesting, and you have to be super ready to jump on the court. I think that that can be something that might be appealing. I’m not sure the players would agree on 15 seconds between points to be honest, so that’s that’s gonna be tricky. I don’t mind it, but I think I think a lot of players would struggle with that. I really enjoyed being out there, enjoyed the competitive nature of it because this is basically why we’re here – to compete and try to play with the rules we have introduced. Either way we’re still gonna have the same mentality. It’s not up to me to decide for any of those things, but it would be nice to do a survey to see what the players think.

Are you going to play the US Open?

I have not decided. I don’t know if I’m gonna be able to to recover that quicky in order for me to fly again and have to have to put my body through a really rigorous regime again. As I told you, it’s been about a week or 10 days since I’ve been back on my feet. I want to say it would be ambitious for me to go play, but I’m just really not sure how my body is going to respond. I’m going to keep practicing, keep on seeing where my physicality is going to take me. And hopefully have also a good mentality to kind of go through it. I think a lot of players are definitely a little bit confused with what what they should do. I think we all can sit down with our teams and ort of discuss the possibility of playing or not. Also, don’t forget that quarantine is going to be a big issue for everyone. So I think I think there are just too many too many questions with very little answers right now and I think everybody’s on the same boat. Once some more information surfaces, then I think everybody’s gonna kind of assess that and probably make the best decision for themselves.