Home » News » Nadal vs Djokovic: GOAT, head-to-head, stats, all you need to know about the rivalry – updated with 2022 Roland-Garros

Nadal vs Djokovic: GOAT, head-to-head, stats, all you need to know about the rivalry – updated with 2022 Roland-Garros

The rivalry between Rafael Nadal and Novak Djokovic is the most prolific in tennis history. Head-to-head, greatest matches, stats: here is our guide – ahead of their next clash in the 2022 Roland-Garros quarter-final 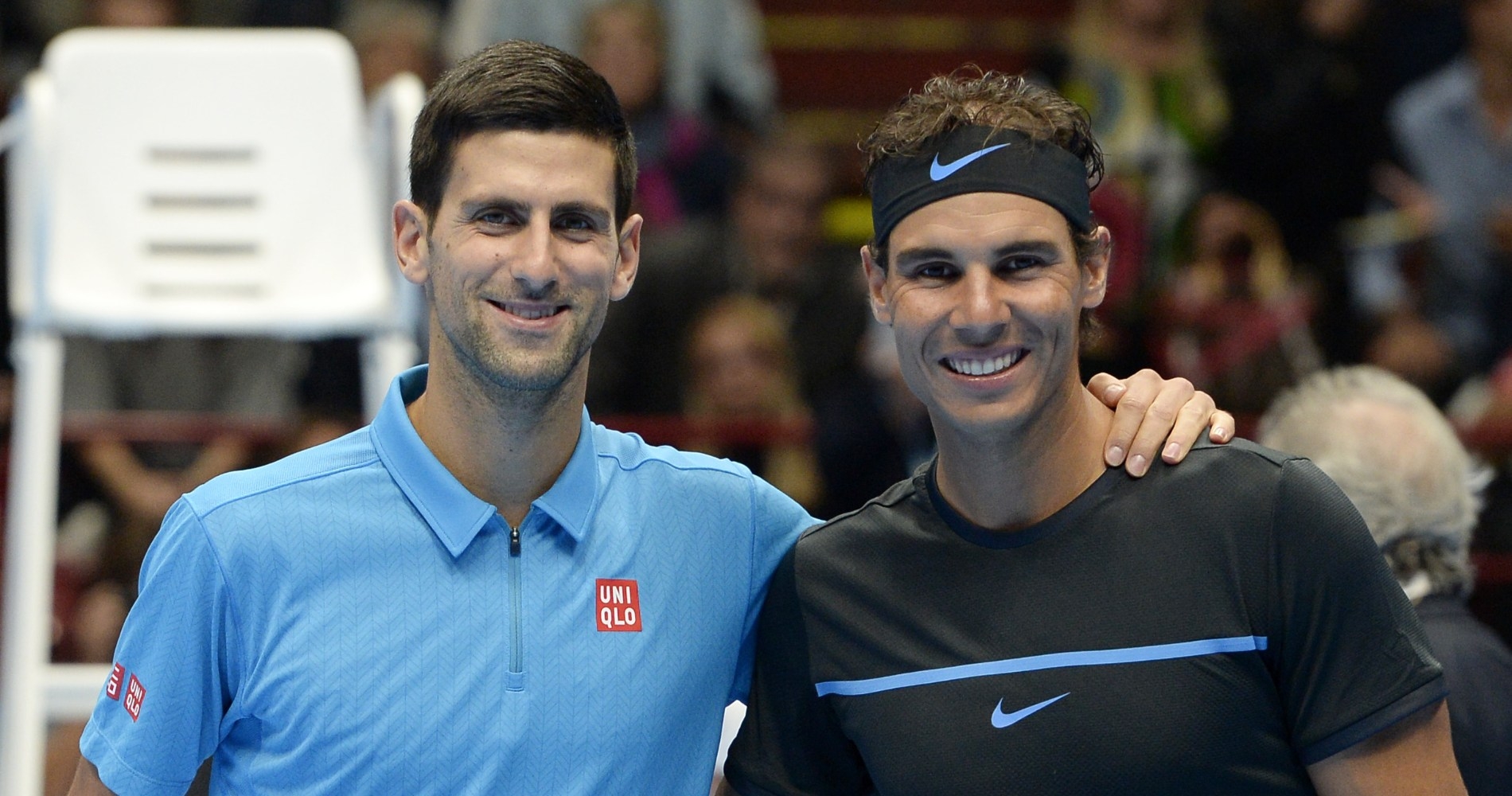 The rivalry between Rafael Nadal and Novak Djokovic is one of the most remarkable in tennis history and the arguably greatest rivalry of the last decade.

It is the most prolific in the Open era. The two men have faced each other 59 times, more than any other player. Djokovic leads their head-to-head 30 wins to 29. The Serb is also the one who has won the most finals: 15 to 13. But Nadal has won the most of their 18 Grand Slam meetings. He has triumphed 11 times, losing seven times.

Out of these 59 matches, 27 were played on hard courts, 28 on clay, and four on grass. The two champions have met in the finals of all four Grand Slam tournaments. Remarkably, they form the only male pair in Open Era history to have met in four consecutive major finals, from Wimbledon 2011 to Roland Garros 2012.

The style of play of the two players, two of the best defenders in history, makes their clashes different from their matches against Roger Federer.

Their first confrontation took place in the 2006 French Open quarter-finals. Djokovic retired in the third set, with Nadal leading two sets to love.

The first part of their rivalry, from 2006 to 2010, was overshadowed by the one between Nadal and Roger Federer. It was also dominated by the Spaniard, who defeated Djokovic 16 times, losing only seven times. 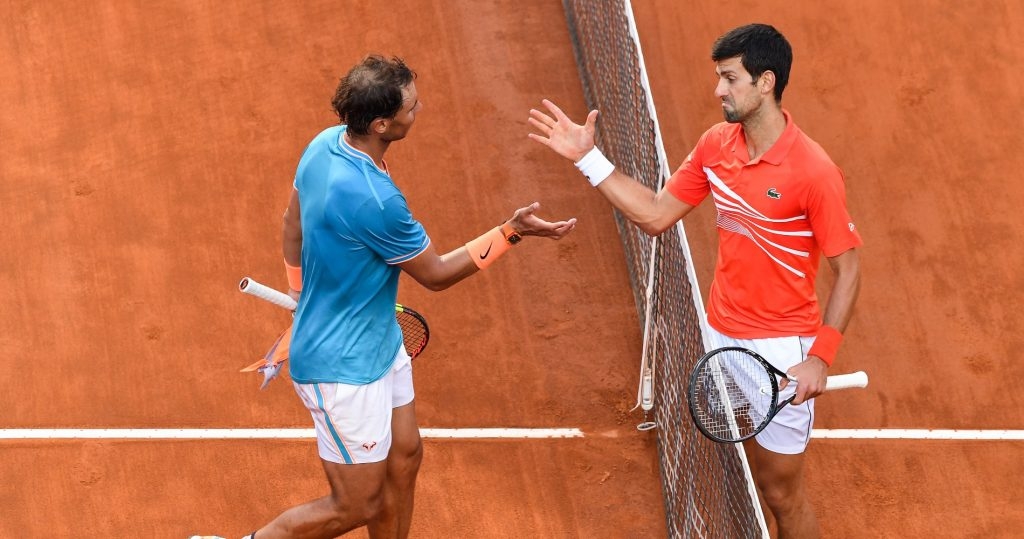 Novak Djokovic and Rafael Nadal at the net after their 54th meeting in Rome in 2019.

Nadal vs Djokovic: Who is the best?

It is impossible to rank these two champions and establish who might be the GOAT (Greatest Of All-Time), especially since their careers are not over. Nevertheless, here are a few numbers to compare them.

Rafael Nadal has won 91 ATP titles in his career, which can be broken down as follows:

He also lost 37 finals, including 8 in Grand Slams.

Novak Djokovic, who turned pro five years after Federer, has won 87 ATP titles in his career, which can be broken down as follows:

Novak Djokovic lifted the Davis Cup in 2010 with Serbia.

The Serb won the bronze medal in singles at the Beijing Olympics in 2008.

Novak Djokovic is the only player to have won at every Masters 1000 event in his career (Miami, Indian Wells, Monte-Carlo, Madrid, Rome, Montreal / Toronto, Cincinnati, Shanghai, Paris, and World Tour Finals). Nadal did not win those in Miami, where he lost several times in the final, and Paris, where he played a final in 2007. He never won at the World Tour Finals, which constitutes the biggest flaw in his prize list.

As of April 2020, Rafael Nadal has been world number 1 for 209 weeks. That is less than Djokovic, who has topped the ranking for 371 weeks, breaking Federer’s record of 310 weeks at number 1.

Nadal vs Djokovic: Who has the best stats?

Rafael Nadal has won 1052 matches in his career, compared to Djokovic’s 1001 (all figures as of May 2022). But Djokovic is one year younger.

Nadal has a 55% career point winning ratio, a bit more than Djokovic’s 54%. They have similar serving stats: they have won 67% of points on their serve (Federer is 70% on serve). They are probably the two best returners on the tour: they have both won an impressive 42% of return points in their career (Federer is only 40% for instance).

What is the greatest match between Nadal and Djokovic?

Let’s enjoy some of these brilliant, brutal encounters.

Djokovic took on this match with a significant psychological edge. He had won all seven of his seven encounters with Nadal in 2011, each time in the final. But the Serb had just played two days earlier an extraordinary 4:50 semi-final against Andy Murray, won 7-5 in the fifth set.

Nadal won the first set, and had never lost a Grand Slam final doing so. Yet the Serb reversed the trend and seemed to be heading for a 4-set win when, at 4-3 in his favour, he led 0-40 on Nadal’s serve.

Nadal held on, kept battling for every point, and eventually snatched the fourth set. He celebrates the win as if he had won the tournament on his knees. The Spaniard carried on to get the break first in the fifth set. Yet Djokovic rallied from a 2-4 deficit and fought back by taking again the Nadal serve.

In an unbreathable atmosphere, at more than 1:30 am local time, Djokovic saved a last breakpoint on his serve, then converted his first match point with a stunning forehand winner to claim a dramatic victory, 5-7, 6-4, 6-2, 6-7(5), 7-5.

The Serb then took his shirt off and roared in a celebration that will be remembered . The award ceremony only added to the match’s legend. As the two men, exhausted and struggling to stay on their feet, the sponsors’ speeches went on and on. Eventually, organisers took pity, brought chairs and bottles of water.

With 5:53, this match is the longest Grand Slam final in history. The two best defenders fought in an astonishing endurance contest. Djokovic finished with 57 wins to 69 unforced errors, Nadal with 44 wins to 71 unforced errors.

“This one was very special,” Nadal admitted in the press conference. “That’s probably a match that’s going to be in my mind not because I lost, no, because the way that we played.”

Another marathon with exceptional drama. Back in June 2013, the French Open is the only Grand Slam Novak Djokovic has not won, and the Serb is going for the “Nole Slam” after having seized the last 3 Slams against Nadal in the finals.

The Serb was a man on a mission. He was on his way to knock Nadal out of Roland-Garros when he served with a break lead at 4-3 in the fifth set. Nadal had never been so challenged in a fifth set at Roland-Garros.

For the first time in three years, the champions met again, in an early final to join Kevin Anderson in the final. They delivered once again a fight of unbelievable intensity and tennis quality.

Before this match, Nadal had not appeared again in the semi-finals at Wimbledon since his 2011 title, and Djokovic had not played a Slam semi-final since the 2016 US Open.

Djokovic took a crucial step towards victory by winning a thrilling third-set tiebreak. The match had to be interrupted at the end of the third set due to Wimbledon’s 11 p.m. curfew. It had started at only 8:10 p.m. due to the extended semifinal match between Isner and Anderson.

Their most legendary clash on the ATP tour. 4:10 long, this Madrid Masters 1000 semi-final is the longest match ever played in a Masters 1000 event.

What is the best point between Nadal and Djokovic?

Find out some of the most beautiful points between Nadal and Djokovic on the ATP tour in this Tennis TV video:

Who is the best in Grand Slams?

As of May 2022, Rafael Nadal has won 21 Grand Slam titles, the Serb 20. But these figures are set to evolve rapidly, as both men have won 14 out of the last 15 Grand Slam titles. Nadal is one year older than Djokovic.

Both players have won all four Grand Slam tournaments in their careers.

In their Grand Slam meetings, Nadal leads 11-7. They met in 9 Grand Slam finals.

Who has the best record against Roger Federer?

Rafael Nadal and Novak Djokovic both lead in their head-to-heads with Roger Federer, five and six years older than them respectively.

Rafael Nadal has 24 wins to 16 losses against Roger Federer (as of April 2020). In the Grand Slam, Nadal has beaten his Swiss rival 10 times and lost four times.

Novak Djokovic defeated the Swiss 27 times and lost 23. In Grand Slams, Novak also has a positive ratio: he leads 11-6 in their confrontations. He has not lost a Grand Slam match to Federer since Wimbledon 2012.

Nadal vs Djokovic: Are they friends?

“It’s kind of difficult” to be friends, says Novak Djokovic, because “we are rivals of course“, answering a question about his friendship with Nadal and Federer. Rafael Nadal and Novak Djokovic are meeting a lot on the tour aside from their matches, and “have always respected each other”, as great champions.

Rafael Nadal, however, puts his relationship with Federer one notch above the one he has with the Serb. “It is true that with Federer I have lived more moments and spent more time with him than with Djokovic”, he admitted in an interview with Ultima Hora, before adding: “I have good relations with both and I think we have achieved that amongst us”.