Every day Tennis Majors takes you back in time to celebrate a great moment in tennis history. Today, we go back to 1996 to witness how a tight Agassi got disqualified from the Indianapolis Open 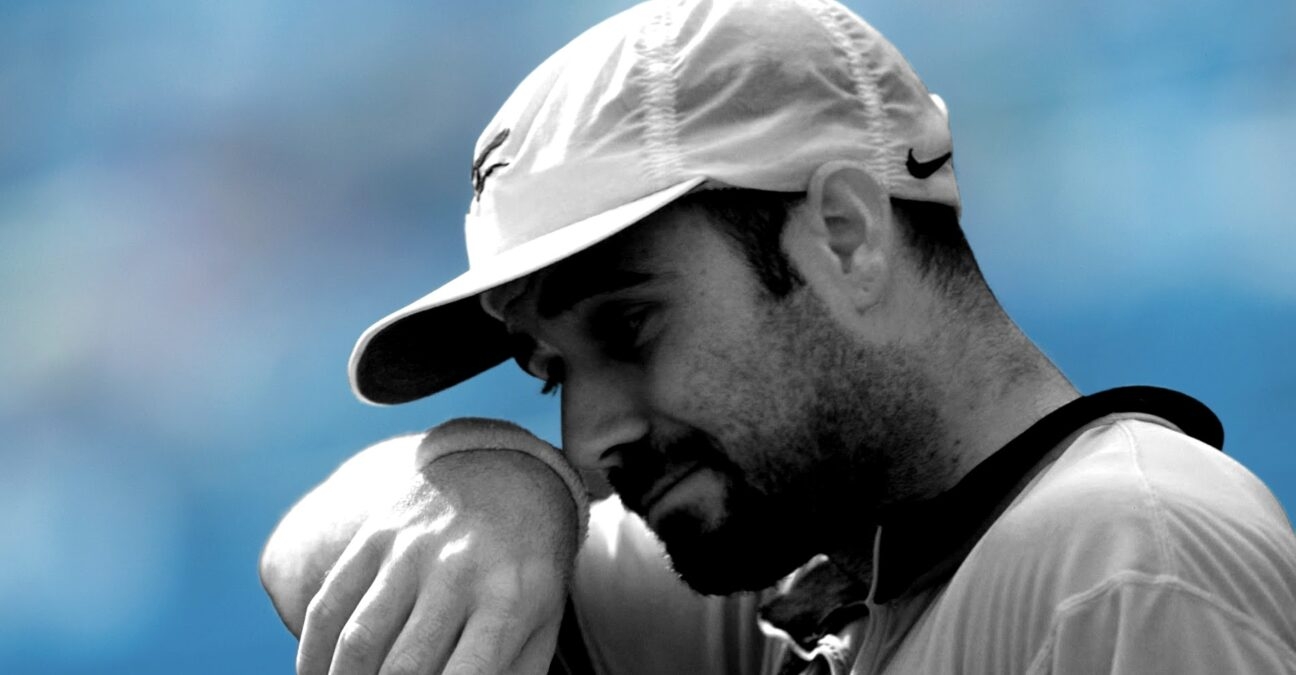 On this day, August 14, 1996, in Indianapolis, Andre Agassi, who was going through rough times in his career, was defaulted from his second-round clash against Daniel Nestor. The American superstar, despite having won the first set, 6-1, swore at the chair umpire after having been awarded a first warning, and was disqualified, to his own astonishment.

Andre Agassi, the Las Vegas Kid, was a tennis legend. He turned professional in 1986 and he  soon became one of tennis’ biggest superstars, thanks to his amazing tennis skills but also to his interesting outfits, including the iconic denim shorts and garish pink compression shorts (worn as an underlayer). Taught by his father and bred at the Nick Bollettieri Academy, his game relied on a jaw-dropping, perfectly timed return (the best of his time) and on hitting the ball on the rise on both sides with incredible power, which was revolutionary at the time and then copied by generations of tennis players. After finishing runner-up three times, once at the 1990 US Open and twice in Roland-Garros (1990 and 1991), he claimed his first Grand Slam tournament at Wimbledon in 1992, defeating big server Goran Ivanisevic in the final (6-7, 6-4, 6-4, 1-6, 6-4).

This title was followed by the 1994 US Open and the 1995 Australian Open, the only time he beat his eternal rival Pete Sampras in a Grand Slam final (4-6, 6-1, 7-6, 6-4). Agassi reached world No 1 shortly after this success, on April 10, 1995, for 30 weeks. Defeated in the Wimbledon semi-finals by Boris Becker (2-6, 7-6, 6-4, 7-6), he then claimed four consecutive titles throughout the summer, remaining undefeated until his rival Sampras beat him once again in the US Open final (6-4, 6-3, 4-6, 7-5). The disappointment that followed this loss was such that Agassi only attended one tournament until the end of the season, giving up on the fight for world No 1.

In 1996, Agassi struggled with motivation, and, although he still obtained great results (he reached the Australian Open semi-finals, claimed two Masters 1000 titles in Miami and Cincinnati, and obtained the gold medal at the Olympic Games in Atlanta), he was not as consistent as in 1995 and by August, his ranking had dropped down to world No 6.

Born in 1972, Daniel Nestor was already much more famous for his achievements in doubles than in singles: the Canadian, world No 140 in singles, was world No 8 in doubles, having notably reached the final of the 1995 Australian Open (partnering Mark Knowles). His greatest achievement as a singles player was a spectacular upset of Stefan Edberg, world No 1 at the time, in the first round of the 1992 Davis Cup.

Originally known as the U.S. Men’s Clay Court Championships, the Indianapolis Tennis Championships switched to hard courts in 1988. Held at the Indianapolis Sports Center a few weeks before the US Open, it usually attracted great players who were preparing for the last Grand Slam tournament of the season. Amongst its former champions, there were four current or former world No 1s: John McEnroe (1989), Boris Becker (1988, 1990), Jim Courier (1993), and Pete Sampras (1991, 1992).

In 1996, Andre Agassi attended the Indianapolis Tennis Championships for the first time in five years. The presence of the Las Vegas Kid attracted a lot of spectators, especially as his long-time rival Pete Sampras was there as well. On top of that, after having appeared out of shape at Roland-Garros (defeated in the second round by Chris Woodruff, 4-6, 6-4, 6-7, 6-3, 6-2) and at Wimbledon (ousted in the first round by world No 281 Doug Flach, 2-6, 7-6, 6-4, 7-6), Agassi seemed to have gathered himself together: after his Olympic triumph in Atlanta, he had claimed the title in Cincinnati, consecutively defeating world No 4 Yevgeny Kafelnikov (7-6, 3-6, 6-3), world No 2 Thomas Muster (6-4, 6-1), and world No 3 Michael Chang (7-6, 6-4). As a consequence, his first match in Indianapolis, where he faced Daniel Nestor, world No 140, looked like a warm-up for the mighty Agassi, who stormed through the first set 6-1. However, his opponent gave him more trouble in the second set, and, after losing his serve to find himself trailing 3-2, Agassi was awarded a warning by the umpire, Dana Laconto, for throwing a ball into the stands. However, unpleased by this warning, Agassi harshly responded to the umpire.

“I hit the ball out and he says, “Warning” and right when he was finishing me giving me my warning, I said, “F*** You, Dana.”, explained Agassi afterwards during the press conference.

The chair umpire called for the supervisor, Mark Darby, who instructed him to default Agassi straight away. The American, who thought that he could only get a penalty point, couldn’t believe the decision, and refused to leave the court.

“To get defaulted saying something that you have said [in the past] and only gotten warnings and point penalties for — that is not fair. That side of it is not fair; doesn’t change the fact that I shouldn’t have said it.”

Meanwhile, his opponent waited for him to leave the court, which Agassi had to do in the end, to the dismay of the crowd, who started throwing bottles on the court. It was the first and only time in his career that the Las Vegas Kid was defaulted. Although the former world No 1 couldn’t find words harsh enough against the supervisor, Darby later stood by his decision.

In the twelve following months, Agassi’s struggle with motivation would continue, to the point where his ranking would drop down to world No 141 at the end of 1997. However, he would then come back to the top to triumph at Roland-Garros in 1999 and reach world No 1 again. He would never get defaulted again.

Daniel Nestor would climb as high as world No 58 in singles, but he would become a legend in doubles, reaching world No 1 in 2002, accumulating eight Grand Slam titles throughout his career.