Every day Tennis Majors looks back at the biggest moments in tennis history. On November 22, 2015, Novak Djokovic capped an exceptional season by clinching a record fourth consecutive Masters title 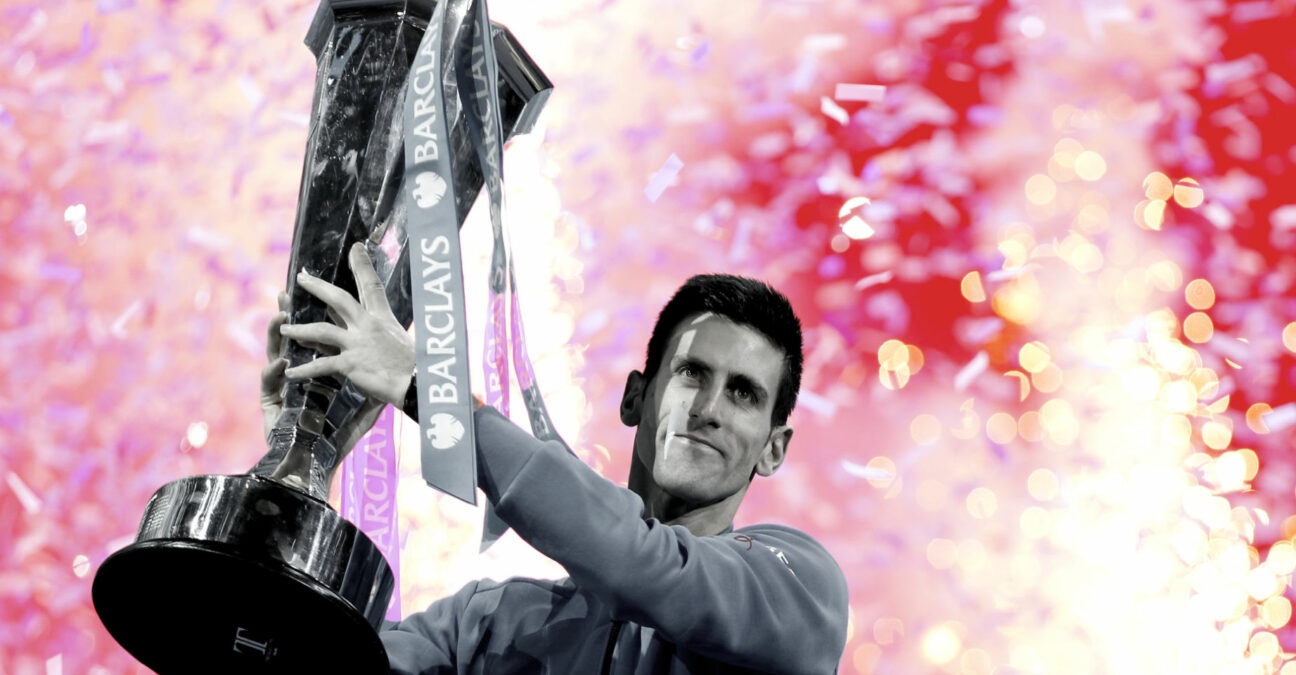 On this day, November 22, 2015, Novak Djokovic defeated Roger Federer in the final of the ATP World Tour Finals (6-3, 6-4). The Serbian, who had already set a record of 15 consecutive wins at the year-end tournament a few days before, was the first player in tennis history to triumph at this even more than three times in a row.

Novak Djokovic was born in 1987. He entered the top 100 in 2005, finishing the year as world No 83. In 2006, he made himself famous by reaching the quarter-finals at Roland-Garros while ranked only No 63, after he beat world No 9 Fernando Gonzalez in the second round. His breakthrough year was 2007, when he reached the semi-finals at Roland-Garros and Wimbledon (stopped each time by Rafael Nadal) before making his way to the US Open final where he was defeated by Federer (7-6, 7-6, 6-4). At the start of 2008, he triumphed for the first time in a major tournament, edging Jo-Wilfried Tsonga in the Australian Open (4-6, 6-4, 6-3, 7-6). Djokovic then remained world No 3 for the next three years, often reaching the last rounds of major events where Federer and Nadal kept preventing from adding more major crowns to his list of achievements.

Things changed in 2011, when Djokovic played a close to perfect first half of the season. Triumphing at the Australian Open at Andy Murray’s expense, he remained undefeated for 43 matches, until Federer beat him in the semi-finals of Roland-Garros. Since then, the Serbian had accumulated six new Grand Slam crowns (Wimbledon in 2011 and 2014, the US Open in 2011, the Australian Open in 2012, 2013 and 2015). Although he had been challenged for the world No 1 spot, especially by Nadal in 2013 and 2014, he had spent more than 150 weeks on top of the ATP rankings since 2011. In 2015, after his Australian Open title, he faced the biggest disappointment of his career at Roland-Garros; having finally defeated Nadal in the quarter-finals (7-5, 6-3, 6-1), he was dominated in the final by Stan Wawrinka, who played flawless tennis to triumph in four sets (4-6, 6-4, 6-3, 6-4). However, Djokovic quickly recovered from that painful loss to triumph at Wimbledon and at the US Open, each time defeating Roger Federer in the final.

Roger Federer, the Swiss genius, born in 1981, was world No 3 in November 2015. He had dominated the game outrageously in the 2000’s, especially between 2004 and 2008, accumulating 12 Grand Slam titles before Rafael Nadal challenged him for the world No 1 spot. In 2009, after three finals lost  against his Spanish nemesis, he eventually triumphed at Roland-Garros, achieving a career Grand Slam that would made most of the tennis world consider him as the greatest player of all time. In 2011, Novak Djokovic became the best player in the world. Federer, who had claimed 16 Grand Slam titles between 2003 and 2010, did not lift a major trophy until Wimbledon 2012. In the eleven next Grand Slams, he reached the final only once, at Wimbledon 2014, where Djokovic edged him in a five-set battle, and he had was stopped three times in the semi-finals. As Federer had not claimed a Grand Slam in three years, many experts now thought he was not capable to triumph in major events anymore as, aged 33, he was maybe getting old. However, he came back strong in 2015, reaching the finals of both Wimbledon and the US Open, but each time, Djokovic deprived him from an 18th Grand Slam crown.

When Novak Djokovic faced Roger Federer in the final of the ATP World Tour Finals, one could think that he couldn’t have thought of a harder opponent. Indeed, the Swiss was the only player to have defeated the Serbian more than once during his exceptional 2015 season: Federer had prevailed in Dubai (6-3, 7-5), in Cincinnati – the last Masters 1000 missing from Djokovic’s list of achievement (7-6, 6-3) – and in the Masters round-robin (7-5, 6-2), where he put an end to his record 15-win streak.

However, Djokovic, on top of his wins at Indian Wells and at the Rome Masters 1000, had above all won their two most important encounters, in the Wimbledon final in July (7-6, 6-7, 6-4, 6-3), and in the Flushing Meadows final in September (6-4, 5-7, 6-4, 6-4). The Serbian had been almost invincible all-year round, reaching the final of every tournament he attended but one, and only a magic Stan Wawrinka had prevented him from achieving the Grand Slam, defeating him in the Roland-Garros final. When he arrived at the Masters Cup, he had won four consecutive titles and remained undefeated since the Cincinnati final, in August. His confidence was not to be shaken easily.

The Serbian had destroyed Rafael Nadal in the semi-finals without even facing a single break point. In the final, Federer didn’t manage to become a much bigger threat: Djokovic’s deep returns kept him at bay as they had in the US Open final, and he was forced to take too much risk to control the rallies. The world No 1 prevailed 6-3, 6-4 in only 90 minutes in a one-sided final.

“I’m very proud, together with my team, for the achievements of the season. It could not have been a better finish. It’s been a long season, but the best of my life,” said Djokovic, quoted by abc.net.au.

Federer had to acknowledge his opponent’s superiority. “I tried my best, I thought I played some great tennis all week and in the final, but Novak deserves the win today like so many times this year,” he said.

Djokovic, who had been one of only three players to have triumphed three times in a row at the Masters Cup, along with Ilie Nastase and Ivan Lendl, was now the only one to have won the tournament four consecutive times. However, Federer still held the record of six titles claimed at the year-end major event.

What next: Djokovic joins Federer and Nadal on 20 Grand Slam wins

Djokovic, after his victories at Wimbledon and the US Open, would go on to become the first male player to hold the four Grand Slam crowns at the same time since Rod Laver, triumphing at the Australian Open and then at Roland-Garros, in 2016. After two years of struggling with motivation, he would become world No 1 again in 2018, equalling Federer and Nadal’s record of 20 Grand Slam titles in 2021.

After a 2016 season plagued with injuries, Federer would come back strong in 2017, winning the Australian Open to general astonishment, before adding two more Grand Slam titles to his list of achievements and becoming the first male player in tennis history to hold 20 major crowns. In 2018, he would also become the oldest male player to ever occupy the world No 1 spot.