Novak Djokovic didn’t want to share the result of his MRI, Sunday, after his victory against Milos Raonic. His abdominal injury is still holding secrets for the world of tennis – and maybe even for himself 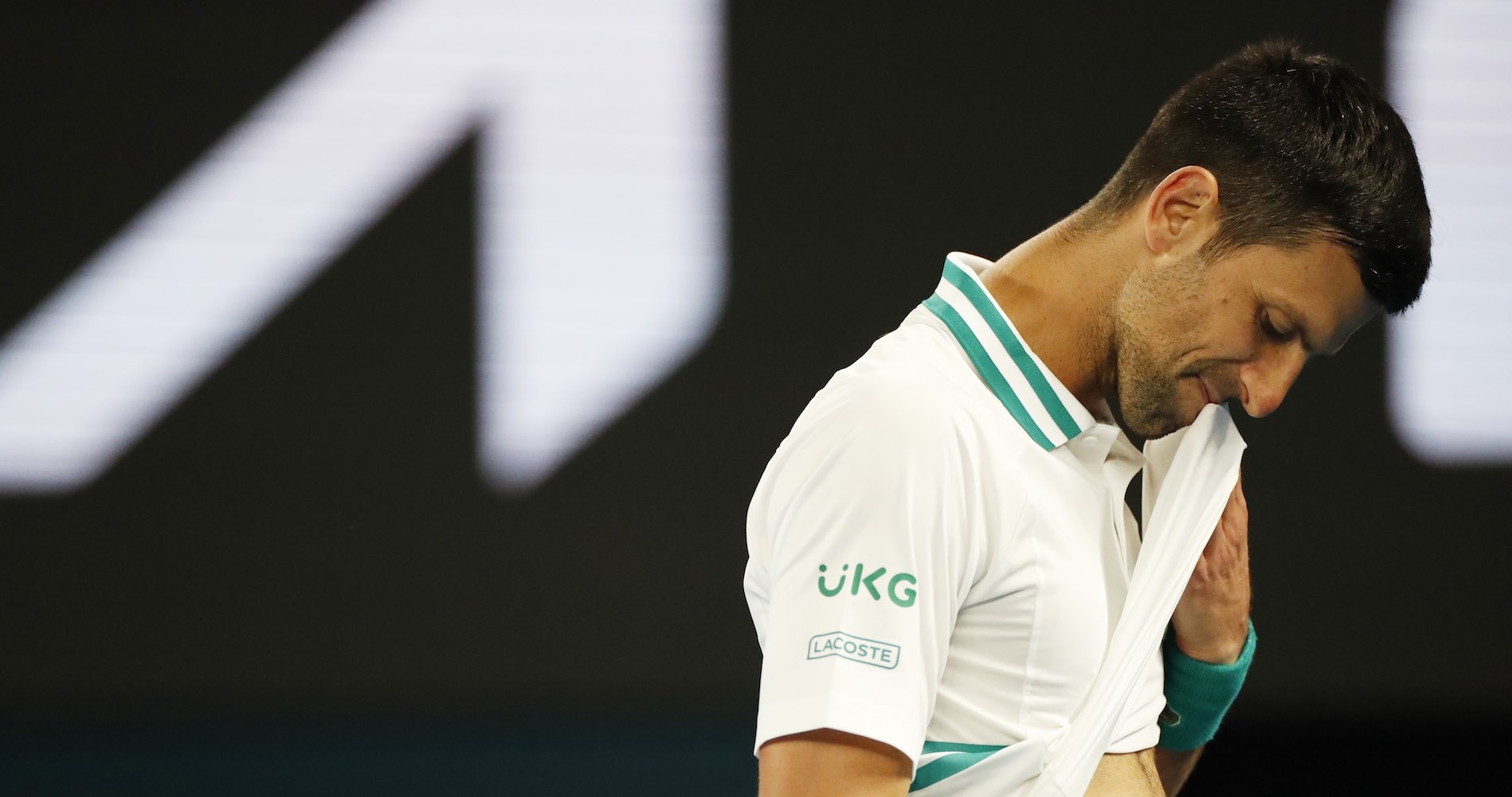 It’s an abdominal muscle injury. That’s the only thing more or less certain. What’s uncertain (and much more important) is the grade of the injury. Novak Djokovic knows it all but doesn’t want to share it. He said :

« People have seen it : I have the tape on my abdominal muscle (in reality, the tape is more on the external oblique, right side, [editor note]). I guess that’s where it is. I understand that you want to know the detail, but I really don’t want to get into it what it is. Yes, I did an MRI, I did everything, I know what it is, but I don’t want to talk about it now. I’m still in the tournament. I hope you guys understand that. I don’t want to speculate too much about it. » 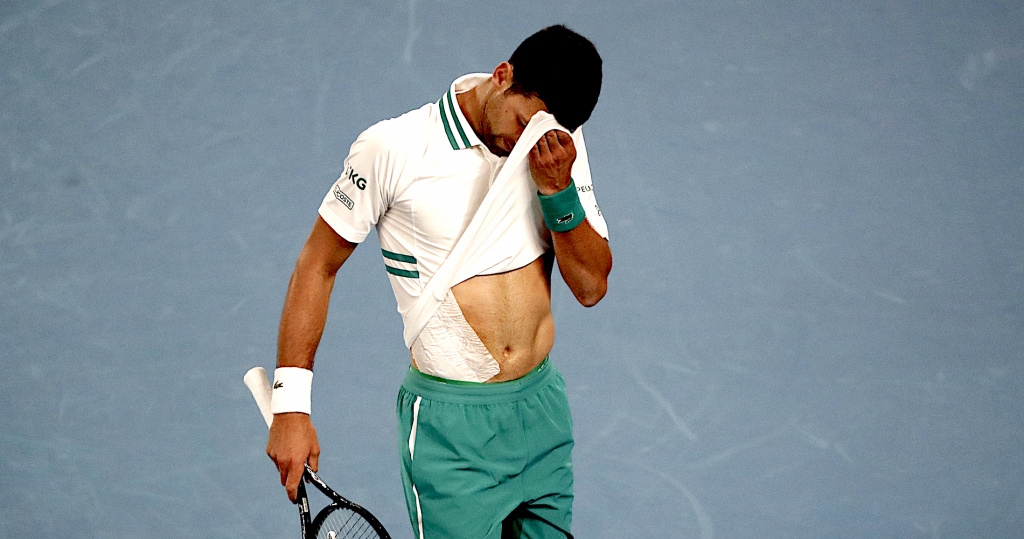 Is it a muscle tear?

The word « tear » was said by Djokovic himself after his win against Taylor Fritz on Friday. He said “I think that’s it’s a tear”, based on his own feelings, in the heat of the moment. The fact that he played four sets well enough to beat Milos Roanic tends to prove that it’s not a tear, most probably a stretch.

Obviously players can say as little or as much about an injury as they like but journalistically, what is frustrating in Novak’s case is that he was the one who mentioned “muscle tear” after the Fritz match. Now he says he doesn’t want to talk about it.

Why does Djokovic not want to reveal the details?

One can think it may give clues to future opponents, which is true. But the Serbian argues that it’s a private matter and that it is his right to hide it.

“I understand that obviously media wants to know, they want to understand what’s going on. They want to convey that, communicate that to people, tennis fans, everybody who is following, because it creates a buzz, it creates a story, uncertainty, as well, whether the player is going to play or not, “what’s happening”, etc. But I would agree with Vika Azarenka (on the fact that health issues have to stay private). I don’t feel comfortable to talk about. I’m gonna tell you how I feel, but I’m not going to go into the medical conditions that I’m experiencing.”

How bad is Djokovic’s pain?

Bearable but definitely there, Djokovic said. For him, being on the court means dealing with pain.

“The level of the pain was bearable, so I could actually play. And it was kind of going on and off a little bit during the match (against Raonic). Certain stage of the match it was more, certain stages less. But I somehow managed to find a way and win, and that’s what matters the most.”

Is Djokovic able to play at 100 percent?

Definitely not. You just need a pair of eyes watching his play to notice his concerns on the court. The No 1 seed is clear on the fact that he managed to play but that he has to deal with pain and the fear that he could be making the damage even greater.

“It’s not ideal for me,” he said. “I definitely have felt better before my third-round match against Fritz than I have starting from third set with Fritz when that happened and all the match Sunday. If I’m part of any other tournament other than Grand Slam, I definitely wouldn’t be playing. I mean, it’s kind of a gamble, I mean, that’s what medical team told me.»

Can his injury become worse?

The answer is a big yes and Djokovic is very conscious of that. That’s also what he means by the word “gamble”.

“As long as I’m with high dose of painkillers, I guess, you know, I still can bear some of the pain. But the tricky thing with the painkillers is that they kind of hide what’s really happening in there, so you might not feel it, but then the big damage might be done. But again, I’m fine with whatever is happening post-tournament, because I’m going to take time off to heal properly before I step on the court again.”

His decision to play, whatever the pain, has no other purpose. Novak Djokovic has won 17 Grand Slams titles. He’s chasing Roger Federer and Rafael Nadal, who both have 20 Grand Slam singles trophies, while Djokovic is the king of the Australian Open with eight titles between 2008 and 2020.

“It matters a lot to me at this stage of my career, of course.” (he is 34). “I want to do everything possible in this very short amount of time to get on the court. There is still potentially three matches to go, and it’s only going to get tougher and tougher for me on the court. »

Is Djokovic taking a long-term risk?

Djokovic admits the risk but does not feel like he’s playing with his general condition at risk in the long term. That’s another indication that it’s most likely a strain.

“I have talked a lot with my own medical team and also the medical team of Tennis Australia – Australian Open. They all share opinion that there is a slight, very slight, slim chance that I will make a significant damage that would take me out of the Tour for whatever, some extended period of time. There is a risk that the injury will get worse, but they don’t think it’s going to be very significantly worse that it’s going to jeopardise my entire season. It might jeopardise certain tournaments that are coming after Australian Open, that I was maybe thinking to play. But that’s something that it’s still in the clouds. »

What part of Djokovic’s game is most affected by his condition?

Patrick Mouratoglou, in the latest Eye of the Coach, underlines that tennis needs abdominal muscles in every movement. Djokovic said the same thing.

Is Djokovic changing his game style to win?

Not really. How would he? Rafael Nadal has given the impression that he is shortening the rallies ever since the beginning of the Australian Open. But Novak Djokovic knew he would beat Milos Roanic with rallies rather than quick shots. Things could be different against Alexander Zverev even if the return challenge will be the same.

“Playing best-of-five with kind of an aggressive mover that I am on the court doesn’t help much with this kind of injury, but I think the combination of pills and medicaments and treatments and also some willpower and of course certain degree and level of bearing the pain. You play somebody like Milos or my next opponent, Zverev, one of the best servers in the world and huge serves, you just have to kind of pray that you are reading their serve in the important moment and kind of get the break. I’ll have to probably adjust the game itself and how I position myself on the court, depending on my opponent. Obviously playing against Sascha (Zverev) is a different match-up, there’s probably going to be more rallies, gruelling rallies, you know, exhausting, and it’s going to be demanding from my side really from back of the court.”

Would Djokovic fake how bad the injury is?

Taylor Fritz said he was surprised at Djokovic’s level in the fifth set of their third-round match, and some comments on social media suggest the Serbian loves muddying the waters. The Serbian is very conscious of that and had strong words, for Serbian media, on how he feels the aituation is unfair. Have a listen to our latest Eye of the Coach by Patrick Mouratoglou to know Tennis Majors’ feelings.

How can Djokovic prepare for his matches now?

No practice and as much treatment as he can. Djokovic said he only knew he could play his match when he’d finished his warm-up against Raonic and a precautionary approach will still be used.

“Before Raonic, I did a lot of recovery. I mean, a lot of, lots of time with my physio on the table, trying to rest as much as I can. Did different treatments with different devices. Just pills, painkillers and stuff like this with medical team of Tennis Australia and Australian Open, that definitely helped a lot. And ATP physios, I want to thank them again for being available for me and for my physiotherapist and giving their best to allow me to be in the condition to compete. I didn’t know few hours before I stepped on the court tonight whether I’m gonna play or not.”

I won’t be training Monday and just, again, going back to recovery routine and hoping that things will get better. It’s really unpredictable, you can’t know what’s going to happen with you once you’re on the court. You’re not gonna save yourself or think about going for that point or this shot or that shot. It just pulls you. It’s normal. Playing at this level, you just want to give it all. It could cause much more damage than it is at the moment, but it also could go in a good direction. So that’s something that I don’t know, and I don’t think I will also know until I stop taking painkillers.”