The world No 1 now has 18 Grand Slam titles, just two behind Roger Federer and Rafael Nadal in the all-time list 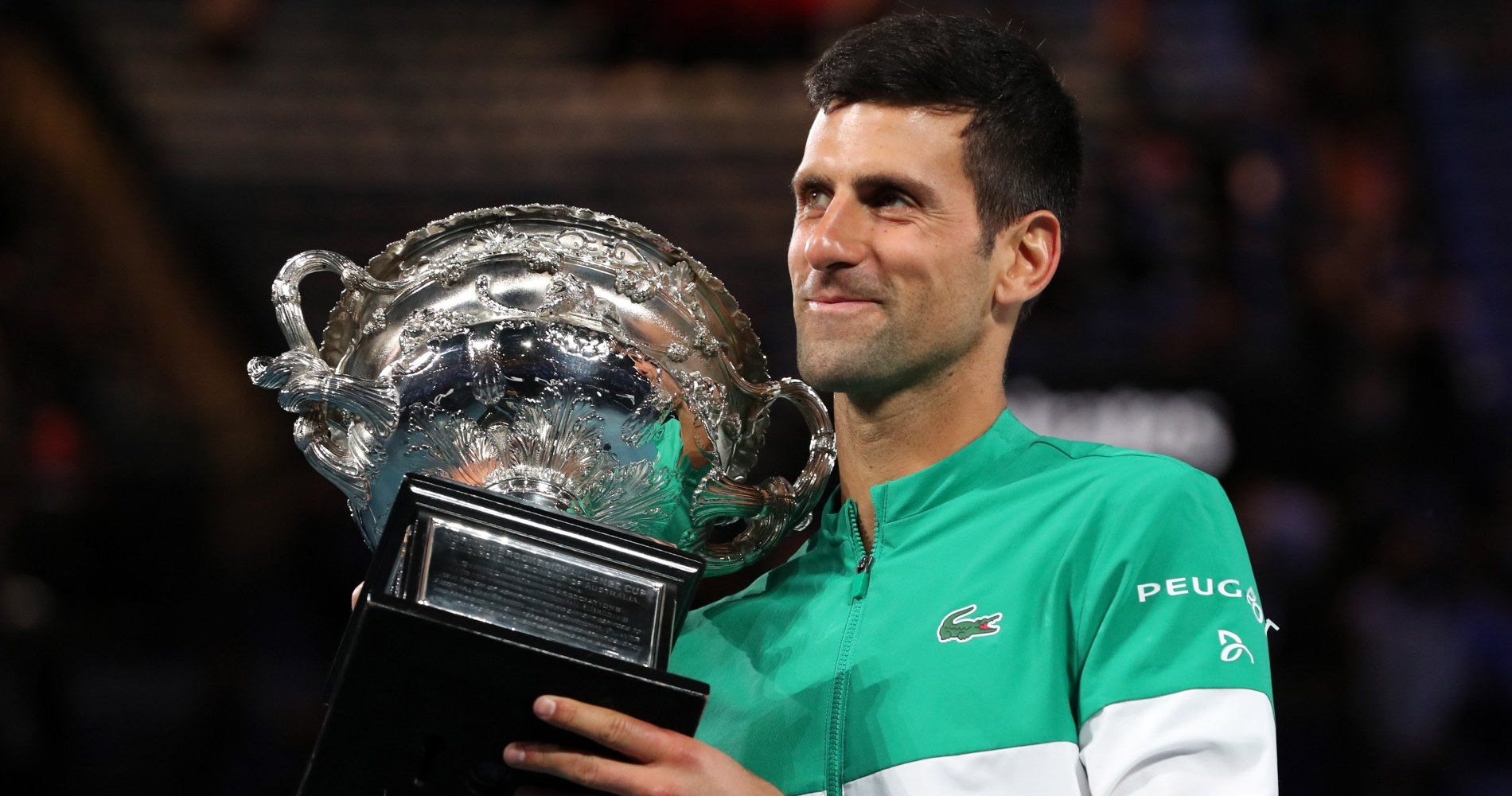 World No 1 Novak Djokovic produced a masterclass as he cruised to a ninth Australian Open title with a 7-5, 6-2, 6-2 victory over Daniil Medvedev of Russia.

Djokovic showed no signs of discomfort from the stomach muscle injury which had affected him midway through the tournament and produced his best tennis when he needed it most as he claimed his 18th Grand Slam title, just two behind Roger Federer and Rafael Nadal in the all-time list.

In his second Grand Slam final, Medvedev, who had looked so impressive in his semi-final win over Stefanos Tsitsipas, fought hard in the first set but was outplayed in the second and third as Djokovic extended his perfect record in Melbourne finals with a stunning display on his favourite court.

“He’s one of the toughest players I ever faced in my career,” Djokovic said of Medvedev in the on-court ceremony. “It’s a matter of time when you’re going to be holding a Grand Slam, for sure. If you don’t mind waiting a few more years.” 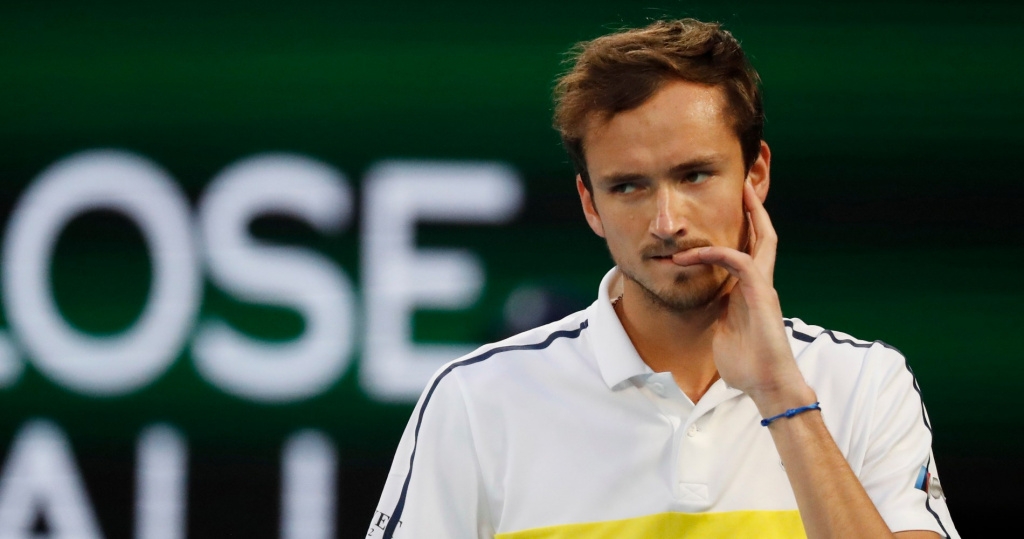 Djokovic began in style, breaking Medvedev in the second game on his way to a 3-0 lead, immediately settling down into the don’t miss mode that had been so integral to his success over the years.

Medvedev found his rhythm on serve, though, to hold with three aces and then, after some great defence, took advantage of a poor smash from Djokovic to break back and then level for 3-3.

In their previous battles, the two men had shared some epic rallies but on Sunday, Djokovic was ultra-aggressive, looking to come forward more often than usual and not let Medvedev relax into the style of play he enjoys the most.

The set looked to be heading for a tiebreak but at 6-5, Djokovic came up with some stunning returns to force three set points at 0-40. Medvedev saved two of them with big serves but he netted a forehand to hand Djokovic the set.

Eyes on the prize 👀@DjokerNole breaks Daniil Medvedev when it matters most to take the opening set, 7-5 in 42 minutes.#AO2021 | #AusOpen pic.twitter.com/rAxT8WSOSq

In his previous Grand Slam final, at the US Open in 2019, Medvedev had come from two sets down to push Rafael Nadal to five sets and when he broke Djokovic in the opening game of the second, it looked like he was on his way back.

But Djokovic broke back straight away and broke again in the fourth game, Medvedev just unable to cope with the Serb’s fine serving and relentless accuracy from the baseline. At 5-2, Medvedev’s frustrations boiled over, smashing his racquet in anger. Two double faults in the next game didn’t help his mood and Djokovic came up with another incredible return to break again and take the set.

Within touching distance 💥@DjokerNole finds himself one set away from another Grand Slam title, taking the second set against Daniil Medvedev 6-2.#AO2021 | #AusOpen pic.twitter.com/wcK43ShTda

Medvedev’s last throw of the dice

Djokovic lost his rhythm on serve, temporarily, in the opening game of the third set as he double faulted twice to give Medvedev two break points. But he saved them and broke in the following game on his way to a 4-1 lead.

Medvedev began to find his rhythm and trailing 4-2, the Russian threw everything at Djokovic and forced 15-30 on the Serb’s serve. But Djokovic hit the baseline with a backhand and then played two immaculate points to move within one game of victory and then broke Medvedev yet again for victory, falling on his back in joy after putting away a final overhead. 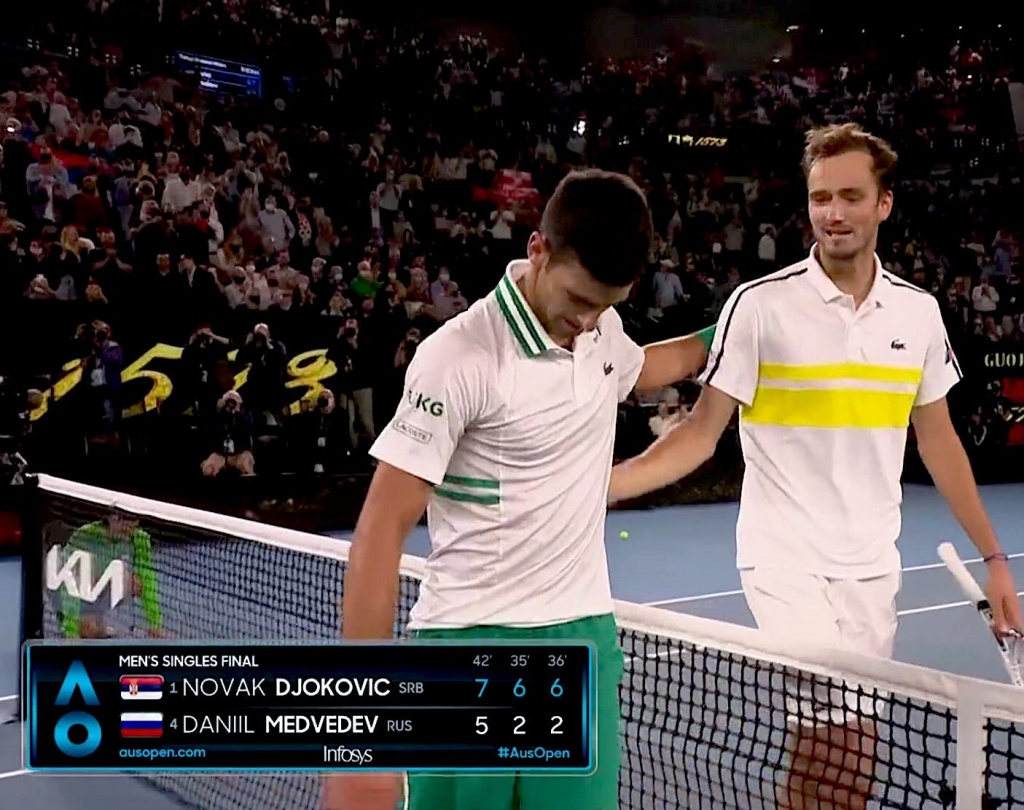 Medvedev was obviously disappointed after his display, saying: “It was not the best day for me today.” But he also found time to tell a nice anecdote about practising with Djokovic when he was a kid.

“Just to tell you a small story,” he said. I think I first practised with Novak when I was like 500, 600 in the world in Monaco. He was already world No 1, had just won Wimbledon and I thought, OK, he’s not going to speak to me, because the guy was a God for me. I came there, I was shy and I didn’t speak, and he was asking me questions, talking to me like a friend, I was really surprised. And it never changed since I was 600 in the world or No 4 in the world, you’re a great sport, great person.”

And Djokovic returned the compliment.

“We used to spend more time together. We used to practice more in Monaco – you’re not calling me any more the last few years. But it’s nice you’re thinking good things about me. Thanks so much.”

Not the match I wanted. All respect to @DjokerNole. Proud of my Aussie summer and can’t wait to be back next year🙏 #workinprogress @AustralianOpen #AustralianOpen2021 pic.twitter.com/lSaM7na2cq