Every day Tennis Majors takes you back in time to celebrate a great moment in tennis history. Today, we go back to 1987 to witness how 18-year-old Steffi Graf seized the world No 1 spot to begin a 186-week uninterrupted reign at the top, the longest in WTA history 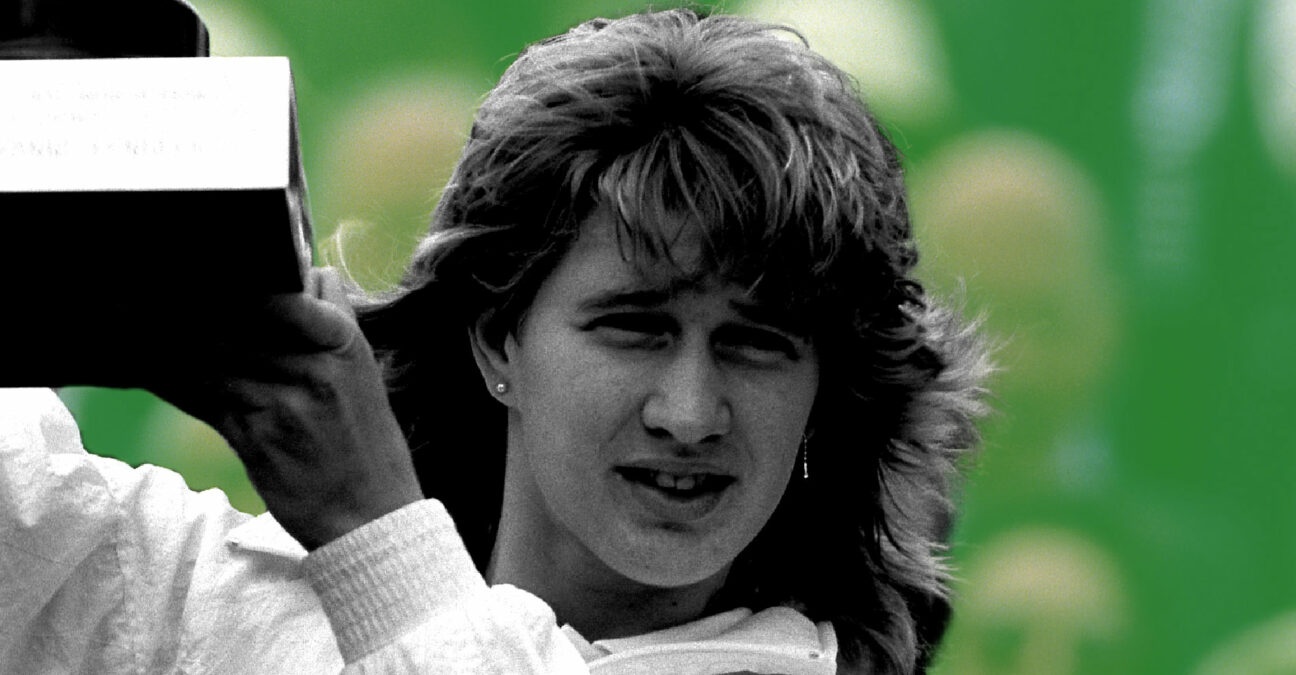 On this day, August 17 in 1987, soon after having claimed her first Grand Slam title at Roland-Garros, 18-year-old Steffi Graf became the world No 1 for the first time. Not only did she put an end to Martina Navratilova’s record 332-week reign, but the German was also the first player outside of the Navratilova-Evert duo to hold the top spot since Tracy Austin in 1980 – more than seven years earlier.

Steffi Graf was born in 1969. In 1982, at the age of 13, she became the youngest girl to ever get a WTA ranking. After winning the demonstration event held at the 1984 Los Angeles Olympics, she constantly improved her game and her results. She reached the semi-finals at the 1985 US Open, at the age of 16, defeated by world No 1 Martina Navratilova (6-2, 6-3). In 1986, she claimed her first title in Hilton Head, defeating Chris Evert in the final (6-4, 7-5), before getting to the US Open semi-finals for a second time. Her first title was followed by seven others, and she finished the year as world No 3. Closely monitored by her father, she grew even stronger in 1987, winning five consecutive tournaments before claiming her first Grand Slam title, edging Navratilova in the Roland-Garros final (6-4, 4-6, 8-6). Four weeks later, she lost her first match of the season in the Wimbledon final, where Navratilova took her revenge (7-5, 6-3). Nonetheless, the German was inching closer to the world No 1 ranking.

In August 1987, Steffi Graf, world No 2, was the most dominant player on the WTA Tour. Since the beginning of the year, she had won 6 tournaments, including her first Grand Slam, at Roland-Garros, and had been defeated only once, by the current world No 1 Martina Navratilova, in the Wimbledon final. The young German was getting closer to the top spot, and when she landed in California to attend the Virginia Slims of Los Angeles, she had the opportunity to become world No 1 if she won the tournament, provided Navratilova didn’t reach the final.

Graf, who later claimed that she wasn’t aware of the fact that she could reach world No 1, made her way into the final without dropping a single set, scoring a double bagel in the second round against Pascale Paradis. On the other side of the draw, the two greatest players of the last decade faced each other in the semi-final, and Chris Evert eliminated Navratilova (6-2, 6-1). Graf, at the age of 18, was only one match away from reaching the pinnacle of her sport.

In the final, in front of a hostile crowd, Graf didn’t play her best tennis, but she played well enough to prevail (6-3, 6-4). The German sealed a tight first set thanks to a beautiful drop volley, and in the second set, she held on when Evert came back from 4-2 to 4-4, showing impressive mental strength to win the last game at love.

“I can’t stop smiling,” said Graf, according to The Los Angeles Times. “It feels great. We were talking about it yesterday with my father after Chris won, about the chances if I win today, if I would be No. 1 or not. He said, ‘No, it’s not possible.’ So after I won today, I went to my father and he said, ‘You’re No. 1 now.’ I was very surprised.”

“I think it’s very important to be No. 1 before the U.S. Open,” added the German.“It takes the pressure off me, now I can go relaxed into the U.S. Open.”

Graf was the first player to interrupt Navratilova and Evert’s domination on the Tour since 1980. The next question on most people’s mind was obviously: how long could she remain No 1 for? Although she praised her opponent’s skills, Evert remained cautious.

“About every five or 10 years, one younger player comes along who is real special and real unique,” Evert said. “I was in those shoes, Martina was in those shoes. I think Steffi is one of those players. (…) Steffi has had a great year, but she has to have 10 great years to match our record.”

As for Navratilova, who won the doubles event on the same day, when asked about Graf seizing the top spot, she let the press know that she was “unavailable for comment”.

What next? Graf creates a record that stands till date

Chris Evert had stated that Graf had to have 10 great years to match the record of her and Navratilova and this is exactly what the German would do. Graf would remain world No 1 without an interruption for 186 weeks (a record only matched, but not beaten by Serena William in 2016), until Monica Seles overtook her in 1991. She would also accumulate 22 Grand Slam titles until her retirement in 1999 and still holds the record of 377 weeks spent as world No 1.

Meanwhile, Evert would retire from professional tennis two years later at the end of 1989, finishing her career on a win over young Conchita Martinez (6-3, 6-2) in the final of the Fed Cup.