Every day, Tennis Majors takes you back in time to relive a tennis event which happened on this specific day. On May 13th, 1973, 55-year old Bobby Riggs thrashed Margaret Court, then the world No 2, in a match known as the “Mother’s Day Massacre”. It was an event that would lead to the famous “Battle of the Sexes” won by Billie Jean King against Riggs a few months later. 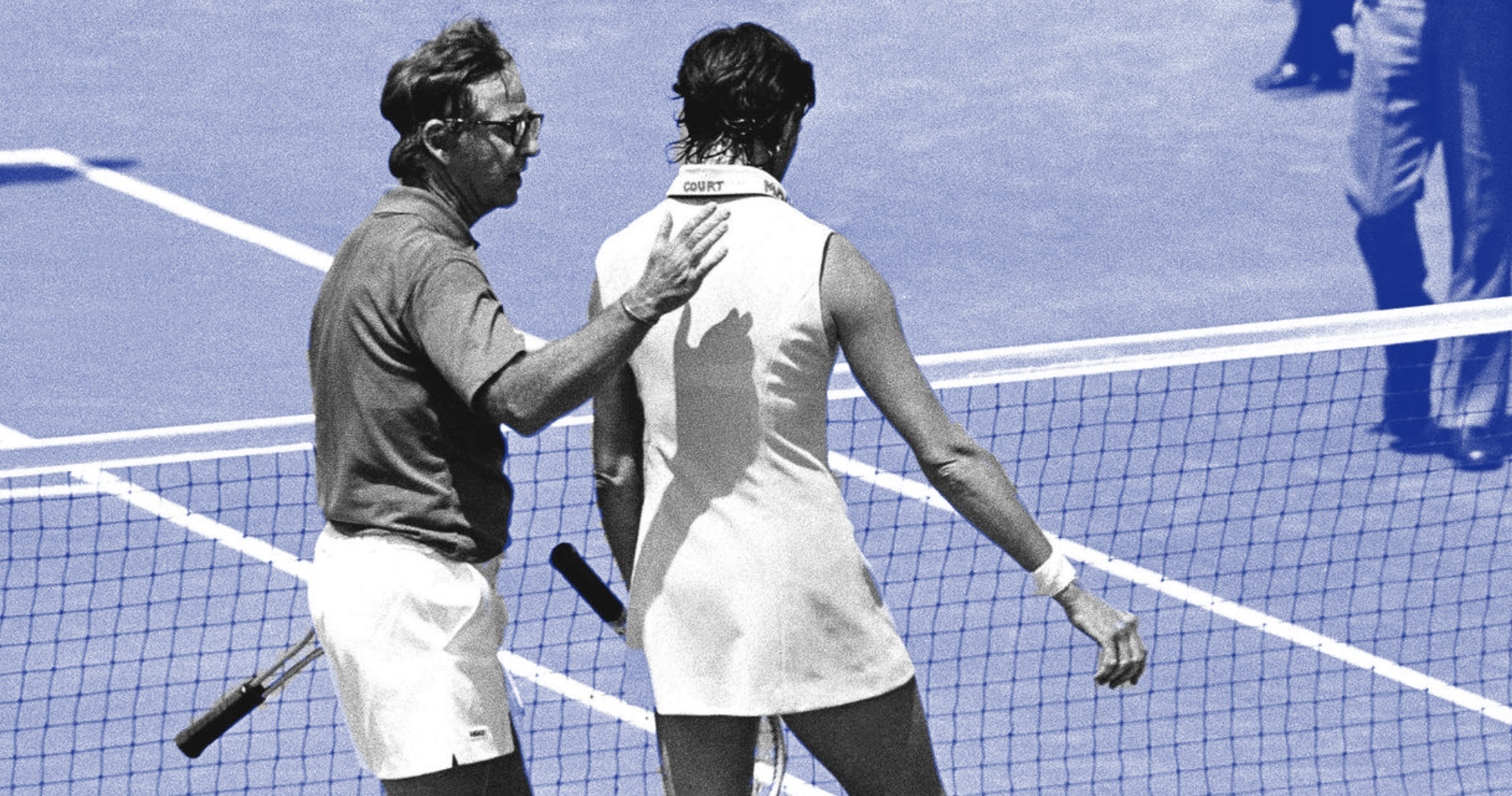 On this day, May 13th, 1973, former world No 1 and professional player Bobby Riggs, then 55, easily defeated the world No 2 in women’s tennis, Margaret Court, 6-2 6-1,  in a prequel of the Battle of the Sexes, known as “Mother’s Day Massacre”. At the time, this win proved Riggs right in his personal crusade against equal pay between men and women. His victory also cornered world No 1, Billie Jean King, whom he had originally challenged, to play against him a few months later in the famous Battle of the Sexes in Houston.

Born in 1918, the American had been world No 1 as an amateur, when he won Wimbledon and the US Open in 1939. That year at the All England Club, he managed to claim all three possible titles: singles, doubles and mixed doubles. He turned professional in 1940, but his career was then interrupted by World War II.

In the late 1940s, touring and competing with players like Donald Budge and Jack Kramer, he was considered one of the very best tennis players in the world, before he retired in 1951. He stayed in contact with tennis as a promoter, but he was mainly known later for being a hustler and a gambler. He claimed he made big money in 1939 betting on his own triple triumph at Wimbledon. 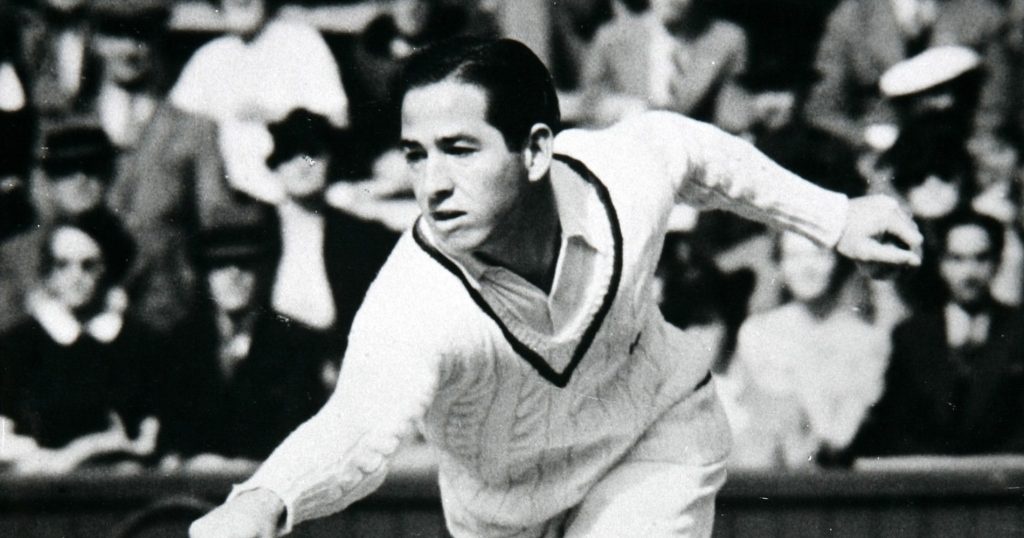 In the early 1970s, disagreeing with Billie Jean King’s demands about equal pay, he started criticising women’s tennis in the most provocative way, probably with the goal of getting attention. “A women’s place is in the kitchen and the bedroom – and not necessarily in that order”, would remain one of the famous statements that earned him then nickname “male chauvinist pig”.

Eventually, aged 55, he decided to challenge Billie Jean King in her prime to prove the superiority of men’s tennis but she had declined so far and had no intention of facing him.

Born in 1942, the Australian was considered as the best women’s tennis player of all time. Her long reach and great ability to move made her serve and volley game lethal in those days. Her strength was a main asset and allowed her to produce very effective overheads. 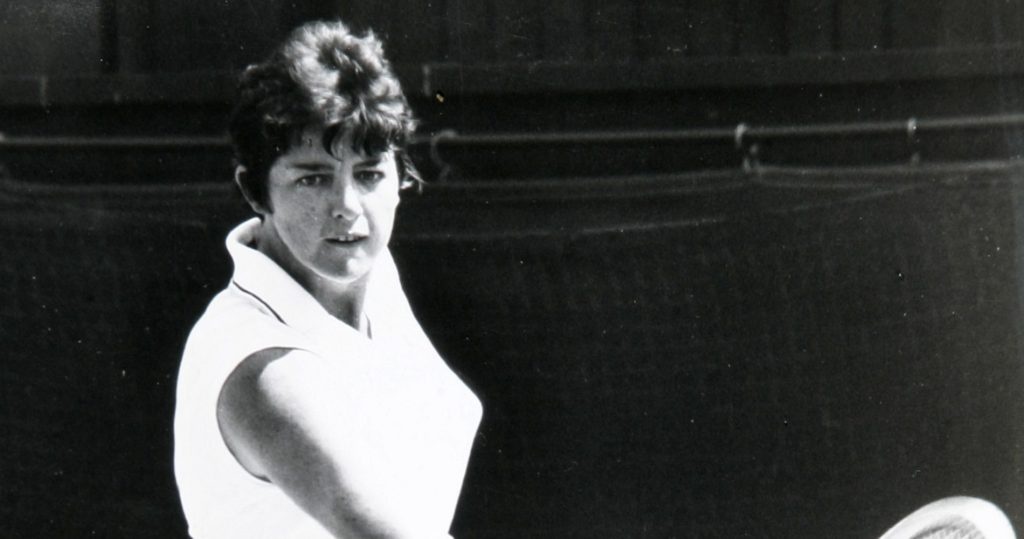 In 1970, Margaret Court completed the first singles Grand Slam of all four slams in one year and by the time she played Riggs in May 1973 she had captured 22 major crowns in singles. She is still the only woman in history to have completed two “Grand Slam Boxed Sets” (meaning winning all the Grand Slams in singles, doubles and mixed doubles), once as an amateur, and a second time as a professional.

The match took place in Ramona, California, in a remote area close to San Diego. Ray Watt, an important real estate developer and main sponsor of the event, owned vacant lots for sale there and he hoped that celebrities attracted by the event would buy his vacant lots and construct glorious vacation homes.

Bobby Riggs had been stirring the pot about women’s tennis for a while. In 1973, he stated that the female game was inferior and that even at his current age of 55 he could still beat any of the top female players.  Originally, Riggs aimed at Billie Jean King, whom he called “the sex leader of the revolutionary pack”.

King had made herself famous for establishing the first women’s professional tour and demanding “equal pay for equal play.” Riggs, on the other hand, claimed this was nonsense. He backed his claim by challenging King to a winner-take-all match, trying to provoke her as she didn’t seem interested :

“If she can’t beat a tired old man, she doesn’t deserve half her dough.”

King did not take the bait. She knew how much was at stake: if she was to lose, her cause would be lost. Risks were too high.

Unlike King, Court was not interested in the fight for women’s rights. She was confident in her game and interested in the promising paycheck. She stepped in, negotiated with Riggs to raise the prize money and accepted the challenge. At first, she considered it just an exhibition match and she did not realize the stakes before it was too late.

As Court was still winning most of the tournaments she participated in, and Riggs was still talking, the excitement started to grow. So did the pressure on Court’s shoulders.

“Look at all these telephone messages,” Riggs would crow every day, as reported by Sports Illustrated. “This match is unbelievable. The eyes and ears of the world are on me. I am the greatest money player in history. I am the finest defensive player in the game. Margaret is the biggest hitter of the girls. What a match! Nobody has a clue how it will go. The mystery of the age. What a deal!”

When Court finally arrived at the site 48 hours before the match Riggs greeted her warmly. “Do you realise, Margaret, that this is the most important match ever played? Just think how many women are counting on you,” said Riggs.

The match took place on Mother’s Day in front of 3,500 live spectators, and around 10 million TV viewers (announced by CBS). Celebrities were present to witness the show, such as O.J Simpson, Bill Cosby and John Wayne, who came to hand over the winner’s check.

The match itself turned out to be a non-event. Probably disturbed by the unexpected pressure that fell upon her as Riggs managed to make it such a popular event, Court was not her true self that day. Making fewer than 50 percent of her first serves, she appeared confused by Riggs’ strategy, which was a compilation of junk shots: slices, lobs, drop shots, he gave no pace and she didn’t seem to know how to deal with it. Riggs quickly took the first three games, losing only four points. Court’s confidence and concentration never recovered and Riggs quickly prevailed, 6-2, 6-1.

“I didn’t expect so many soft shots”, Court explained afterwards.” We girls don’t play like that.”

Riggs was exactly where he wanted to be: at the centre of attention, victorious. Beside himself with excitement, he boasted :

“Don’t ever count me out. Now I want King bad. I’ll play her on clay, grass, wood, cement, marble or roller skates. We got to keep this sex thing going. I’m a women specialist now. I’m going around the world to challenge all the women champions. England, France, Czechoslovakia, everywhere. Me against them, battles of sexes. I’ve found a whole different life.”

“Mother’s Day Massacre” would have enough impact to put Riggs on the cover of Sports Illustrated.

His plans to travel the world, defeating women’s champions, would not work out. King could avoid Bobby no longer. She had said herself that if Court was beaten, she would have to face Riggs herself.  Just over four months later, a second “Battle of the Sexes” would take place. This time at the Houston Astrodome.

It was the biggest tennis event ever organised at the time, broadcast on prime time and viewed by 90 million people around the world. King prevailed and beat him in straight sets, 6-4, 6-3, 6-3. Had Court defeated Bobby Riggs in May, none of that would have happened.

Despite her disappointment, Court would keep going in 1973 to win the French and the US Open, her last ever Grand Slam title. She would still not get involved in any form of fight for women’s rights.

She would retire in 1977, with an overall Grand Slam record of 64 titles, including 24 in singles, a record that still stands. In 2003, a 6000-seat arena would be named after her at Melbourne Park. She would become a Christian minister in Perth and she would be involved in several controversies through a series of homophobic comments.

Nineteen years later, in 1992, another “man vs woman” showdown, named The Battle of Champions, would see Jimmy Connors outplay Martina Navratilova. Although he was only allowed one serve and she could hit into half of the doubles alleys, he would still win 7-5, 6-2. Connors would claim later that he had put a million-dollar bet on himself dropping fewer than eight games.