Serena Williams’ Achilles forced her out of the French Open; Coco Gauff’s serve sent her packing from Paris. Yes, there were plenty of surprises on Wednesday — and in more ways than one! 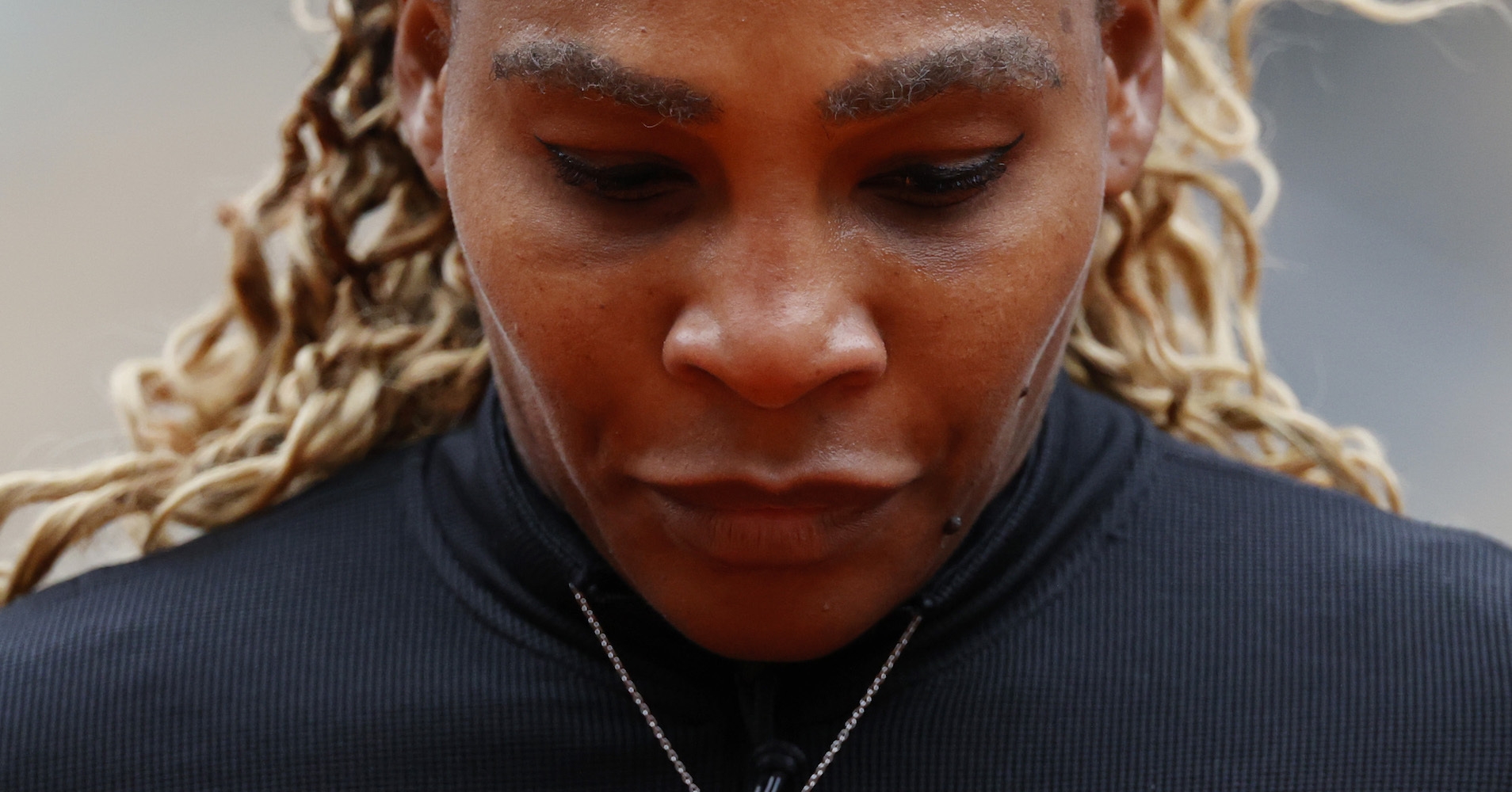 It was a rough day for two American hopefuls on the women’s side at Roland-Garros. Serena Williams could not even take the court due to injury, while Coco Gauff’s wounds were self-inflicted as she double-faulted her way out of the tournament.

However, there was still plenty of drama to be had on both the men’s and women’s sides as second-round action at the French Open got underway on Wednesday. At last there was no sign of rain, and not even a sonic boom could stop the tennis from continuing.

Here is what went down on another entertaining day at the season’s final Grand Slam:

The woman of the day: Bertens wheeled out after win

It’s not often that you get taken off the court in a wheelchair after winning, but that was the case for Kiki Bertens on Wednesday afternoon. Bertens needed a grueling three hours and 12 minutes while saving one match point to outlast a disgruntled Sara Errani 7-6(5), 3-6, 9-7. The Dutchwoman was cramping during the match and went into almost full body cramps after it ended.

Amidst all of the drama, Errani left the court without shaking hands (or in the coronavirus era, not tapping rackets) and shouting expletives. Bertens left in a wheelchair.

8 minutes after collapsing onto the ground, sobbing in her chair and then receiving long treatment with the physio and her team, Bertens was taken away in a wheelchair.

After hitting a ball into the stands, Errani left the court screaming “vaffanculo”. Drama-free match. pic.twitter.com/HHZv3hH5tN

Errani was not happy about the fact that Bertens looked like she was going to keel over in between points but still managed to run all over the place while points were being played.

“I don’t like (it) when somebody joking on you,” the Italian seethed. “I don’t like the situation. One hour she’s injured, then she runs like never (before). I don’t like that. She [goes] out of the court on the chair, and now she’s in the locker (room) perfect, in the restaurant. I don’t like it.”

“She had her opportunities,” Bertens hit back. “She didn’t take them.”

The man of the day: Sinner is a saint

There were no such shenanigans involving Jannik Sinner, who was all business on Wednesday. The 19-year-old Italian booked a spot in the last 32 of a Grand Slam for the first time in his blossoming career when he thrashed French wild card Benjamin Bonzi 6-2, 6-4, 6-4 in just one hour and 55 minutes.

jannik #sinner is the first player born in 2001 to reach a slam 3rd round #rolandgarros pic.twitter.com/mU9iynccXg

Sinner is joined in the third round by another up-and-comer who has also already turned in a career-best performance at a slam, Sebastian Korda. In an all-American matchup, Korda took down John Isner 6-4, 6-4, 2-6, 6-4. The 20-year-old is a former Australian Open junior champion and the son of former Australian Open champion Petr Korda.

It looks like Korda’s coach and fitness trainer will be going for a swim under the Charles Bridge in Prague!

The match of the day: This five-setter ends better for Zverev

Alexander Zverev may not have been at his very best in the French Open second round, but so what? He was not at his very best throughout the US Open and he not only reached the final but also came within two points of winning the title! At the finish line against Dominic Thiem, it was nerves that held the German back even more than his actual game en route to a crushing loss in a fifth-set tiebreaker.

On Wednesday, Zverev successfully battled through the nerves. They will most definitely there, but he survived them; and he survived a battling Pierre-Hugues Herbert — who almost pulled off a huge upset in front a sparse French crowd on Court Suzanne-Lenglen. In the end, it was Zverev who emerged on top in a roller-coaster fifth set full of service breaks for a 2-6, 6-4, 7-6(5), 4-6, 6-4 victory.

When it was all over after three hours and 59 minutes, both men had won exactly 164 points apiece.

The news of the day: Serena out

Williams’ quest for a record-breaking 24th Grand Slam singles title will carry over into 2021. The 39-year-old was supposed to have an intriguing matchup with Tsvetana Pironkova on her hands. They just faced each other at the US Open, where Williams got the best of a tense three-setter. But there would be no rematch at Roland-Garros. The American abruptly pulled out of the tournament due to a lingering Achilles’ injury.

“I tried,” Williams assured. “I always give a hundred per cent. Everyone knows that, even more than a hundred percent, if that’s possible, and I take solace from that. I think Achilles is a real injury that you don’t want to play with because that is not good. If it gets worse, it’s one of the worst. So I don’t want it to get to that point when I have a chance to get better.”

Gauff, Williams’ fellow American who is more than twice as young (16), exited the event in a much different fashion. It was her own serve rather than any kind of bad-luck injury that doomed Gauff’s chances. The world No 56 committed an alarming 19 double-faults — 1o in the second set alone — while losing to world No 159 Martina Trevisan 4-6, 6-2, 7-5.

Gauff’s ouster was surprising, but it paled in comparison to that of Victoria Azarenka. After all, the Belarusian had won the Cincinnati title, finished runner-up at the US Open, and reached the quarter-finals in Rome. There was no reason to think a deep run at Roland Garros wouldn’t be in the cards. And if it wasn’t going to be in the cards, nobody thought Anna-Karolina Schmiedlova would the one to knock her out.

Schmiedlova, who defeated Venus Williams in the first round, rolled to a convincing 6-2, 6-2 upset of Azarenka. Despite the lopsided scoreline, the 161st-ranked Slovak still required one hour and 42 minutes top prevail.

The pictures — and sound! — of the day: Sonic boom

That sound everyone at Roland-Garros — and everyone in all of Paris — heard on Wednesday afternoon was, in fact, a sonic boom. A fighter jet broke the speed of sound, sending shockwaves through the entire city.

“A very loud noise was heard in Paris and in the Paris region,” Paris police wrote on Twitter. “It was not an explosion, it was a fighter jet crossing the sound barrier.”

The quote of the day: The happy wave

Most people who say they are “on the happy wave” are usually under the influence of an adult beverage or some other substance.

Not Thiem, of course. Thiem is simply living the dream, without any enhancements needed. After beating Jack Sock 6-1, 6-3, 7-6(6) in the second round on Wednesday, the third-ranked Austrian was asked how he is feeling so soon after winning his first Grand Slam title at the US Open.

“I feel pretty good, to be honest,” he responded. “I mean, not perfectly perfect. I guess that’s normal. I think the main thing is that I fight 100 percent like I did today. It paid off. I [saved] three set points to avoid a fourth set. That’s very important in the early rounds, to save energy, to play as [few] sets as possible. That’s good.

The shot of the day: A brief moment of magic for Paire

Given his form — both physically and mentally — heading into Roland-Garros, the fact Benoit Paire even won a single match was extremely surprising. Asking him to win two was obviously too much. But before the Frenchman bowed out (7-6(3), 4-6, 6-3, 6-1 to Federico Coria), he made sure to produce a shot full of flair that he is so accustomed to producing.

Benoit Paire. He’s at it again.

And features as the @OPPO Shot of the Day 👏 #RolandGarros pic.twitter.com/8262oeHpXB

Here are the updated men’s and women’s draws as second-round action wraps up. And here are some of the notable matchups on the upcoming schedule: