Home > Roland-Garros > Tsitsipas, the athlete with the body sculpted for tennis

Stefanos Tsitsipas is the player who has played and won by far the most on clay this year (six tournaments, including four finals and two titles). His physical trainer Frédéric Lefebvre tells us how he has shaped such a strong body, and no longer fears anyone 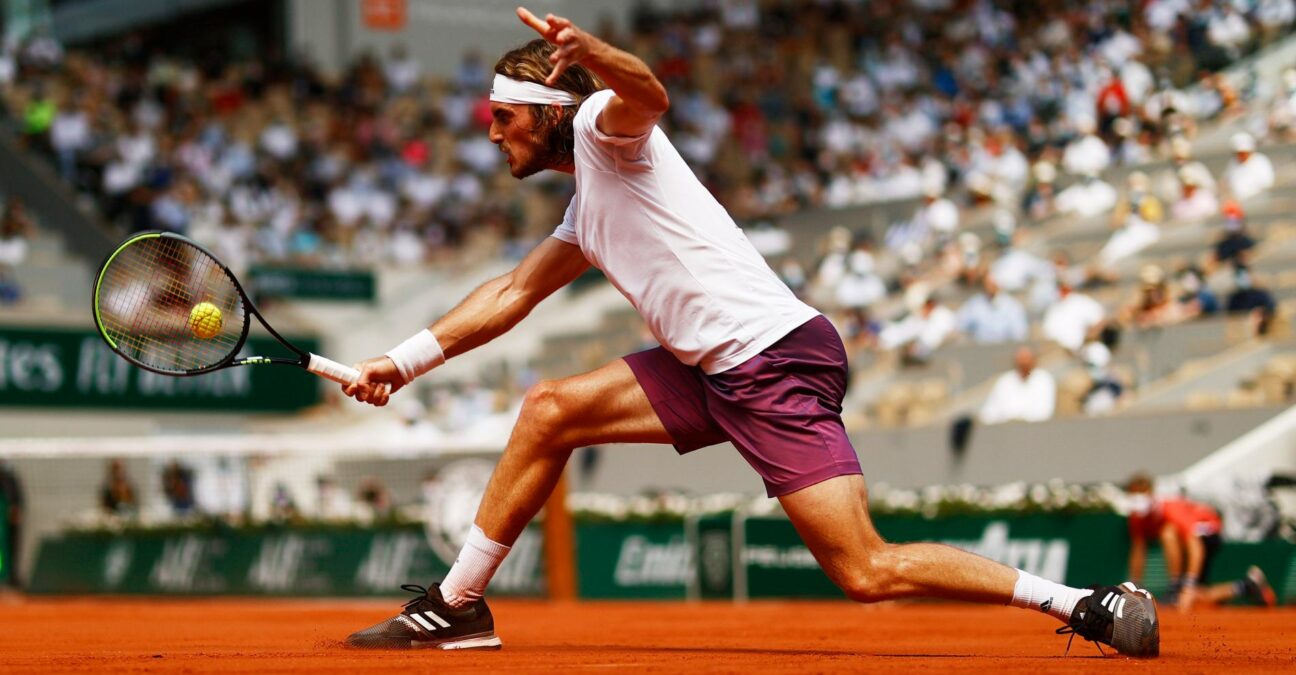 To be honest, we had prepared this article in anticipation of a French Open final between Stefanos Tsitsipas and Rafael Nadal. The idea was to show that the 22-year-old Greek would have everything to fear from the 13-time winner of the tournament – except the physical battle that has made so many players fold in Paris. Having dominated Nadal in the quarter-finals in Melbourne, coming back from two sets down, and having pushed the Spaniard to the limit in a scorching three-hour 38 minute final in Barcelona, the Greek knows he is one of the few players on the circuit who fears no one physically.

“Every time he plays Nadal, he hurts him physically,” said Frédéric Lefebvre, the Greek’s physical trainer and director of physical training at the Mouratoglou Academy. “In Barcelona, he lost (6-4, 6-7, 7-5), but you can see Nadal dropping. He knows that he has to get into the red to make the point. Stefanos’ ball is also very heavy.”

The problem will be quite the same on Sunday in the final against Novak Djokovic. The Serb dominated Nadal on Court Philippe-Chatrier in Friday’s semi-final making him physically decline after three and a half hours of play. Whether he recovers or not, one thing is certain: Tsitsipas will be ready, and his capacity to endure whatever Djokovic has in store is not a cause for concern.

“Stefanos is capable of lasting a very long time at very high intensity,” said Lefebvre on Chatrier, after a training session with Stefanos and Apostolos Tsitsipas. “If he respects all the fundamentals, I have no worries about a long match lasting five sets. The fundamentals are what marathon runners do: drink and refuel during the effort.”

In the five clay-court tournaments he has completed so far, Tsitsipas has won two titles (Monte-Carlo, his first Masters 1000, and Lyon) and played in another final (Barcelona), racking up a total of 26 singles matches, not including five doubles matches he played with his brother, Petros.

Tsitsipas worked hard this winter during the off-season in Dubai, which has allowed him to keep up the pace that has propelled him to his current status as the world’s No 1 player at the Race. “This year, we had a superb pre-season (December 15 to January 15 in Dubai), he put in a lot of effort, he gave 100%,” Lefebvre told us in February.

If he loses a match only to win bigger ones later, precisely because he will have recovered, it’s a blessing in disguise.

The work that the Frenchman is now doing with the Greek is tailor-made. “We adapt to how he’s feeling and his fatigue. 70% of the work is preventive with specific strengthening of certain muscle groups. Sometimes, we do technical tennis work if there is something missing in the accuracy of his footwork. Cardio, speed, endurance, as long as he goes far in tournaments, which is the case, he works on with his tennis [matches].”

Lefebvre points out that one should not be impressed by the number of matches played. “In Monte-Carlo, they all lasted a little over an hour, except for a 7-5 retirement (against Alejandro Davidovich Fokina).”

In fact, the only fatigue Tsitsipas has experienced in 2021 has mostly been on a mental level. He had a few days off after his quarter-final loss in Miami to Hubert Hurkacz, which deprived him of the chance of reaching his first Masters 1000.

“And the loss to [Casper] Ruud in Madrid, two days after the Barcelona final, was the aftermath of that disappointment,” recalls Lefebvre. “He told us and that’s normal. It’s not human to be at 100% in every match. If he loses a match only to win bigger ones later, precisely because he will have recovered, it’s a blessing in disguise.”

On the physical side, Lefebvre is attentive to the data he has and the information the player gives him. “Stefanos is a warrior, never complains and trusts what is asked of him. This year I’m trying to get him to verbalise more to guide us. The Greek,” Lefebvre said, “almost never has a sore spot.”

Djokovic, who is up against Tsitsipas in the final, brings back bad memories of a five-set battle in the 2020 Roland-Garros semi-finals that ended 6-3, 6-2, 5-7, 4-6, 6-1 for the Serb. “Stefanos had a psoas injury, the only problem we’ve had since we’ve been working together [since late 2017].” The Greek had been hurt in Rome against Jannik Sinner three weeks earlier and didn’t recover from it until the end of 2020.

In 2021, Tsitsipas is in top form and Djokovic knows this – having experienced it in Rome in a two-day semi-final. The Greek held a three-game lead in the second set before letting the world No 1 triumph (4-6, 7-5, 7-5). And when asked after his battle with Nadal, the Serbian summed up the stakes. “This match will also be very tough. I hope I can recharge my batteries in time because it will also require a lot of power and energy.”