Alexei Popyrin produced some of his best tennis of Ultimate Tennis Showdown to steamroll an out of sorts Benoit Paire and record his third victory of the entertaining new format (19-10, 17-13, 22-11, 18-16). 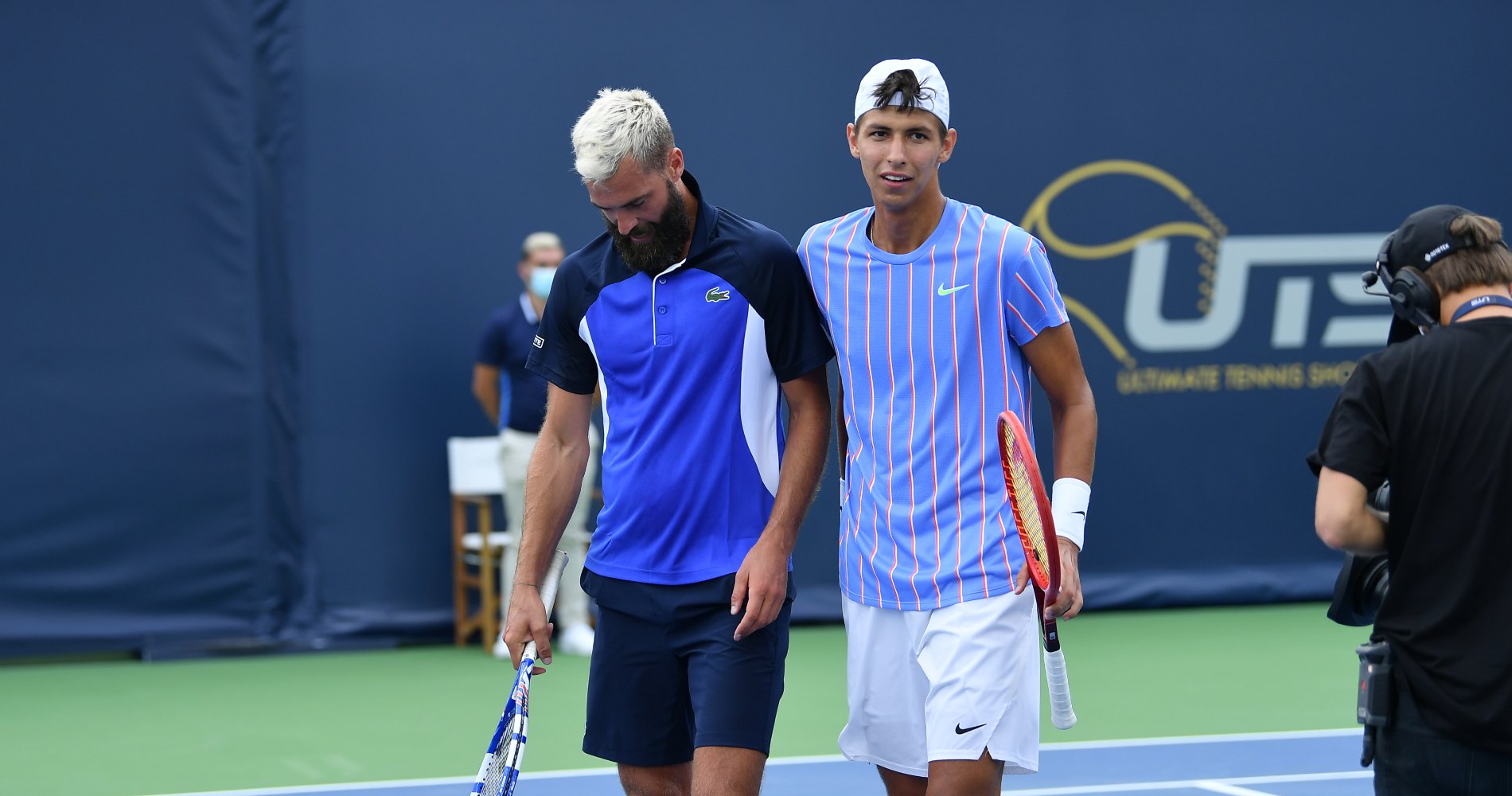 Following the fun of the opening encounter of Day 4, the second match of the day threw up another of the game’s big entertainers, as The Rebel Paire took on The Sniper Popyrin.

Perfect from start to finish 💯

Both players came into the match with everything to gain with their tournament record standing an identical 2-2. It was also something of a grudge match, out to impress the brainchild of this most exciting format of speed tennis, the most important aspect being the use of ‘UTS Cards’ that each player is allowed to choose two from four from before the match to give them a specific advantage if used correctly.

Unlike in the opener, this time the combatants opted for different cards, Popyrin choosing a -1 serve to go with his Winner x3, Paire sticking to the trusted Steal Serve and Winners count x3.

It was a predictably tight opening before Popyrin edged ahead and deployed his Steal Serve to good effect. The Rebel was now playing catch-up and with the clock running down, the Frenchman took his first coaching timeout, of which players are allowed four, and deployed his Winner x3 card.

But it was the young Aussie who used his card the better and at the right time to round out the opening quarter, 19-11.

“I had a clean slate, and finally got a quarter win,” joked Popyrin after losing all eight of them last weekend.

Confidence flowing through his veins, The Sniper also made a good start to the second, but in this format the tide can turn in an instant and The Rebel fought back to level as both players chose to use their cards late in the quarter.

And it was Paire who made the most of his Winnerx3, putting away an overhead when Popyrin perhaps would have been better served bunting the ball out. A Steal Serve followed to good effect and Paire suddenly found himself with a good lead as the clock ran down. Back came Popyrin, his cards also doing the trick as The Sniper found the target at just the right time to edge the quarter 17-13.

“It was good. I think I used my cards very well and I think these cards are working very well for me,” said Popyrin. “It’s not bad, better than last week, that’s for sure. I’ve only played Benoit once before but it’s always been chilled against him and we’re good friends.”

With the UTS format being best of four quarters, there was still time for notorious slow-starter Paire, who had fought back on previous occasions. And it was The Rebel who again had the better of the start of the third quarter, before again being pegged beck, the volatile Frenchman chuntering to himself and bouncing rackets in equal measure.

You heard it here first…

His mood wasn’t enhanced by a lucky net cord for Popyrin, prompting another flying racket and double fault. And Popyrin fed off his fortune, playing the percentages to seal the third quarter, and match win.

“I was already comfortably up but still needed to get that first serve percentage up, I think, said Popyrin at the change. Other than that, I think I did everything well. I have played well the whole match and hope to continue in the final quarter.”

There was still a quarter to play in this round-robin format, with quarters also vitally important to players as they could still matter in the final standings. But with the momentum behind him and Paire’s shoulders slumping, and hurting, the Australian rounded off a convincing, and possibly vitally important 4-0 win with a sumptuous final point pass to win 19-11, 17-13, 22-11, 18-16.