Switching from player to commentator, Frenchwoman Alizé Lim has become a vital part of the Ultimate Tennis Showdown thanks to her creativity and vitality. Join us for a day in the life of Alizé!

Matteo Berrettini: Behind the scenes with the first UTS champion
Next 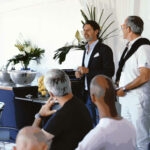 Patrick Mouratoglou and UTS: From roots to polished event

The transition from player to player interviewer has been a seamless one for former World 135 Alizé Lim. At the Ultimate Tennis Showdown she has played a massive role in the event’s broadcasts, and she is also playing a big role conducting Major Talk interviews for this website.

She’s enjoying her role, and loves to help the players get their voices heard at the Ultimate Tennis Showdown, where the vibe is mellow and the athletes are more willing to open up than they are when on the regular tour.

“The players are in a different atmosphere, they are more open and more themselves and less closed up than if you see them at a tournament.”

“It’s easier for me if I’m doing a few different things than if I’m doing one thing – that way I never get bored,” Lim says. “My main priority is to manage my energy between all the things that I am doing.”

Lim is a natural in front of the camera, and it’s clear that her comfort level with the players helps her bring the interesting elements of their character out in interviews.

“I think I like the human part of it, so I like talking to people, getting deep into someone or feeling that I just finished interviewing someone and I got to know the person better, in a very honest way.”

Currently at 625 in the WTA rankings, Lim is still working hard on the court, training every day. She puts her heart and soul into tennis, but doesn’t believe that the sport should close her off from seeking out other opportunities that interest her.

“In general in my life I was always trying to find a way to do other things, and this is what didn’t help my tennis,” she says. “I was getting injured, I would lose my focus. I was feeling guilty for it, so let’s say it was a double negative. Then I met someone who helped me understand myself better. I then understood better that this is something I need. This is the way I function, so I shouldn’t go against it. It’s okay not to be like everyone else. And I don’t care that people are judging anymore, and that they are saying ‘She’s not focused, she’s doing other things, she’s not 100 percent in tennis.’ If this is the way I function and this is the way I’m happy then it’s okay for me now.”