Home » Vidéos » Is Rafa the GOAT after Roland-Garros? – Match Points #18

Is Rafa the GOAT after Roland-Garros? – Match Points #18

In Episode 18 of Match Points, Josh Cohen guides Marion Bartoli, Simon Cambers and Ben Rothenberg through a deep dive on the men’s tennis GOAT debate. With Rafael Nadal and Roger Federer tied at 20 major singles titles there is a fresh sense of urgency on the topic… 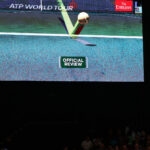 Should video technology be used to help the umpire? – Match points #17
Next 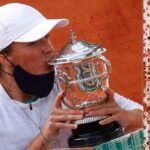 After Rafael Nadal’s 13th title at Roland-Garros, and 20th major singles title overall, the question on the tip of every tennis pundits’ tongue is: who is the men’s tennis GOAT?

We pooled the panel to get some definitive answers, but as you can imagine, the takes varied.

“My immediate answer is no, I just don’t think there is a greatest at this moment. I think we have three players who are still very much in motion,” Rothenberg says. “And it’s tough to judge their rank with one another at this given point.”

Former Wimbledon champion Marion Bartoli agrees with Rothenberg and says that only time will tell who the real GOAT of men’s tennis is.

“No I don’t think so because the problem is that Roger and Novak aren’t finished. I think we really have to wait until those three, all of them are retired, and make the counts, in a way, at the end,” she said.

Grand Slams matter, but how much?

In the end, the player with the most Grand Slam titles will have the inside track on winning the GOAT debate, but who might that be? Simon Cambers believes that it could will likely come down to what type of tennis Djokovic and Nadal have left in them.

“The obvious pick is Novak just because of his age, but he’s only a year younger than Nadal,” he said. “I would give Rafa probably two or three more maybe. All things being equal he’ll be favorite again at Roland Garros next year – it’s only seven months away.”

Cambers adds that it’s crazy to believe that Djokovic can win five or six more majors, but he won’t rule it out. In the end, Cambers’ crystal ball forecasts a tie on the title list – something like 21 or 22 apiece for Federer, Nadal and Djokovic. Wouldn’t that be a treat?

“You have to think that Novak will win a couple next year, but to ask him to win we’re sort of laughing and saying ‘Oh yeah, he’ll win five or six, no problem.’ It’s incredibly difficult to win a Grand Slam. So we’re saying six Grand Slams maybe that Novak might have to win to end up on top. I can see it being a tie to be honest.”