Sharapova on Djokovic: “Who’s this kid?”

Have a look at the best and funniest tennis contents posted on social media on May 5th. Tennis Majors compiled them for you. 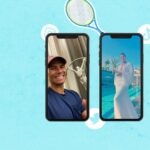 Tennis stars are being creative and funny on social media during the lockdown imposed by the coronavirus pandemic. Tennis Majors put together for you the best that happened on social media on Tuesday, May, 5th. Here is the social zapping. Staring Novak Djokovic, Maria Sharapova, Corentin Moutet, Noah Rubin, and more.

On Tuesday, Novak Djokovic and Maria Sharapova excited their fans with an Instagram Live. They remembered great memories from the tour, one of being a dinner date earlier in their careers. Before Novak had won his first Slam, in 2008, they played against each other in a mixed doubles match exhibition in Indian Wells.

“I was young and you were young, way before you had any Grand Slam titles. I think we were playing mixed doubles against each other, and you said that if you won, I would have to pay for dinner – and I said, ‘Okay, who is this kid?” Sharapova said.

That day, Novak Djokovic won the match and went to dinner with Maria Sharapova.

“So we did! You pulled out this old Kodak camera and you asked the waiter to take a photo of us, and I was like, ‘This feels like I auctioned myself off for this dinner,’ and here we are! I don’t remember anything about who we played with, but I remember this dinner and this old-school camera,” she added.

Novak Djokovic, who listened to the narration with embarrassed laughter, confirmed Sharapova’s side of the story. However, he did manage to pack a final punch.

“That’s actually what happened. Maria is telling the truth,” he said. “But you have to admit to everyone here that you lost that match on purpose!”

On our social zapping, you will also see the new song of French tennis player Corentin Moutet, the beautiful roller paper trophy won by Yannick Hanfmann, the Noah Rubin’s challenge and Serena Williams with glasses on her Instagram ! Have fun !