Cracking down on tennis fans – why gifs are so controversial

Fans were dismayed when they were told not to create or share gifs from this year’s French Open. We take a look at why tournaments are so concerned. 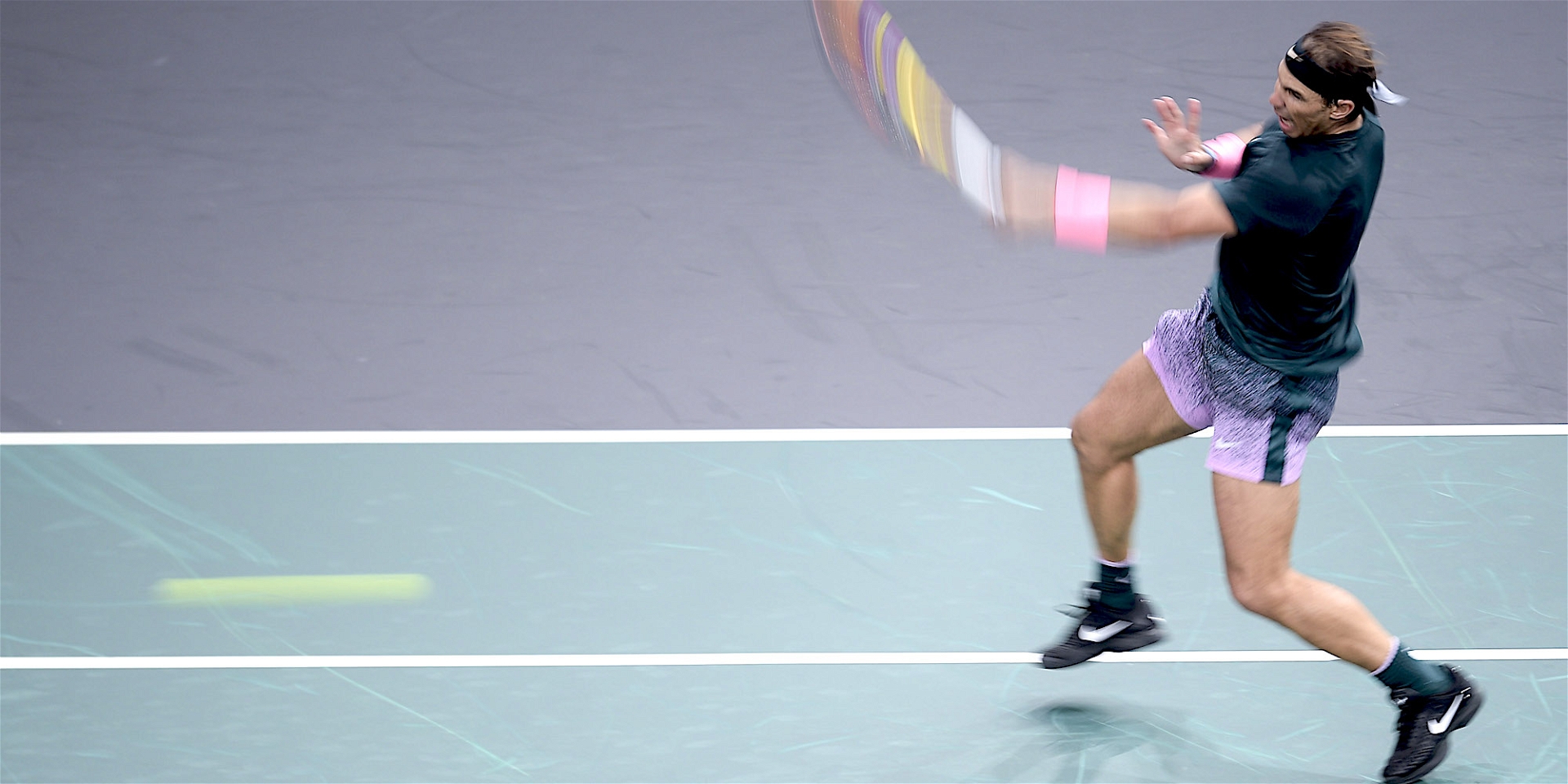 Want to express an emotion online? Or remind people of a particular point, or trophy lift? Spotted a funny moment during a match? Gifs – Graphics Interchange Format – are those small animated video clips you’ve probably seen being used on social media.

But it’s more challenging than you might think if you’re looking to make tennis gifs and post them. In September, the FFT, organisers of Roland-Garros, forbade fans from making gifs of tournament footage, and issued take-down notices to any social media accounts uploading them. Fans were shocked and angry – for many, working while the matches were being played, following social media coverage and seeing some of the funniest or most striking moments via gifs was the only way to keep up to date with what was going on.

This year’s PwC sports survey highlighted the importance of gifs. A select group of industry leaders were asked how they expected media consumption to grow in the near-term future; 90.5 percent of them expected highlights or short-form content to grow or grow significantly. The ATP and WTA create gifs with their footage from tournaments, running them alongside the more traditional video clips of points or trophy presentations; host broadcasters do the same. But they don’t tend to look at the footage with the same eye as fans, who are always ready to clip a gif of a funny facial expression or a player taking a pratfall.

Creating a good gif can be tricky – but rewarding if it gets plenty of engagement, particularly when people are attracted to the sport because of it.

“I don’t think talking or tweeting exclusively about forehands, spins and other technicalities will help tennis to expand its audience,” says Oleg S., a Twitter (@AnnaK_4ever) user living in Russia who creates gifs, and has almost 5,000 followers who enjoy his work. 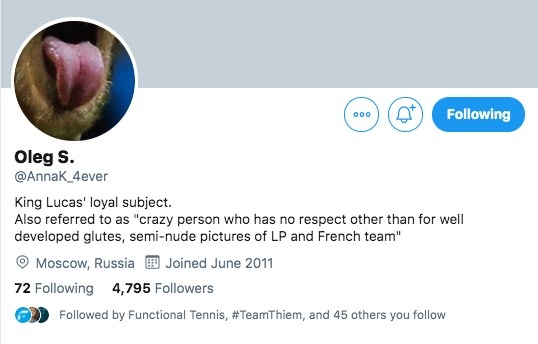 “I mean, we all love great shots and do gif them but sport is bigger than that. I think it’s telling that a lot of matches played without spectators in this COVID era feel dull – you need this energy and emotions, and not just smooth stroke production.”

“Last year I posted about 500 gifs from Roland-Garros,” he says. “There were no problems; there were no questions.”

Alex, also living in Russia, has been a sports fan since childhood. He began running one of social media’s most popular tennis gif pages in April 2016, sharing fun and interesting clips from matches with fans. He says he has always been aware that some rights-holders are not happy for gifs to be made of their event – and in those cases, he will not do so.

As Alex suggests, though, sometimes tournaments and broadcast rights-holders forbid fans from creating gifs. Both he and Oleg have been contacted by authorities previously, telling them to remove their gifs from social media, and have also received take-down notices – when a rights-holder puts in a formal claim over the footage used.

This year saw another massive crackdown during the French Open. Gif creators were told to remove their images from social media, and informed they were infringing the rights of the broadcasters who had paid to show the tournament on their TV and online subscription channels.

The FFT, organisers of the tournament, explained, “The gif images are animated images and are an integral part of the rights [broadcasters] acquired. In order to preserve the exclusivity of the rights granted to them, we are using a service provider who is acting on our behalf in the case of counterfeiting and who has thus removed 150 animated images of matches from this edition.” 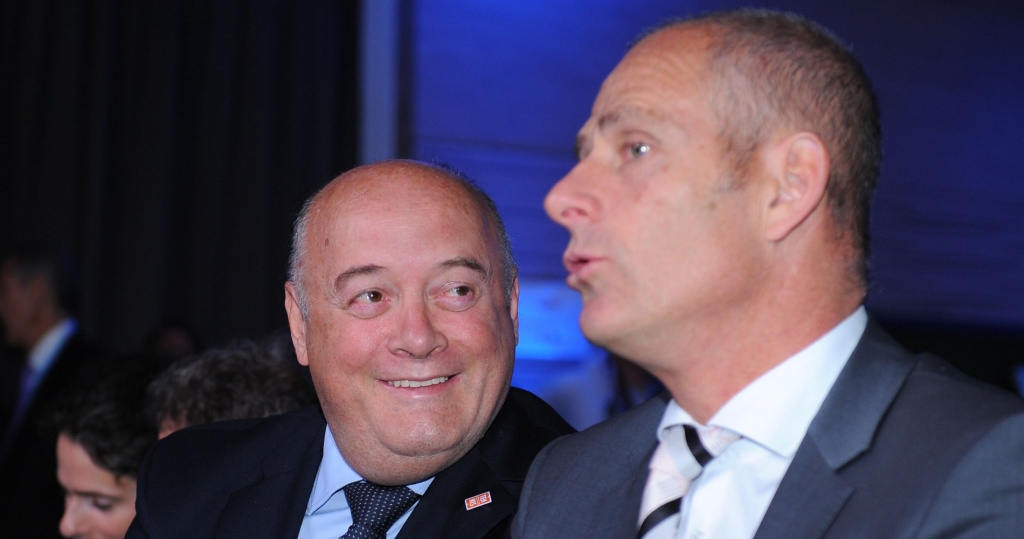 ‘Counterfeiting’ is a strong term, particularly when it comes to a small, brief, animated image, usually lasting just a few seconds. (This kind of language and this tough legal stance is unsurprisingly part of the reason that both Alex and Oleg are reticent to talk too much about themselves or their backgrounds.)

The big business of rights holders

But sports broadcasting is big business. Securing the rights to broadcast a Grand Slam in just one region can cost tens of millions. For example, Sportcal estimate that just to show the Australian Open in Australia, the Seven Network paid around $30 million for a four-year deal, running from 2015 to 2019. The BBC paid much more to become the host broadcaster of Wimbledon from 2018 to 2020 – $93 million.

We’re very pleased to have extended our broadcast partnership for #Wimbledon championships right through until 2024 https://t.co/j5aRDTLoCr pic.twitter.com/SGJ2BjU27G

Broadcasters themselves will probably not pursue fans and their gifs on social media as it is massively time-consuming and can result in a negative backlash of publicity, as the FFT found – but they do know that tournaments will do so if requested as they are so concerned about protecting their financial viability.

One expert argues that this is all a big case of over-reaction.

“The concern is that in the time of user-generated media that there will be some kind of challenge from people who do not purchase media rights, that they’ll infringe them in some way – that fans will become producers themselves and negatively affect what the tournament has to sell, which is ultimately its image,” says Professor David Rowe of the University of Western Sydney in Australia, an expert in sport and broadcasting.

Professor Rowe argues that fan accounts are bringing tennis to a wider audience – not the people who are already paying up and tuning in – and they are also bringing fans closer together with athletes, many of whom enjoy the gifs they see of themselves.

“Fans are doing this because they like the sport, they want to talk about it, share jokes and information – that is the lifeblood of sport,” says Professor Rowe. “If you don’t have fans, there is no sport.”

“I enjoy tennis gifs a lot as it’s a good way to promote the sport all over social media,” says Lisa, a tennis fan from Paris who was disappointed with the FFT’s decision to stop viewers distributing non-official gifs. “It’s also a good way to share our passion for tennis so that we feel closer to the action and to make sure we aren’t missing anything, especially with the varieties of gifs – hot shot, celebrations, reactions, funny moments. Even players enjoy them a lot.”

She thinks that the FFT’s actions were “regrettable” from a fan’s perspective, but also wonders if it will do the federation harm in the long term.

“It deprives them of international promotion of their event through these gifs, which aren’t intended to infringe copyright, but simply meant for the pleasure of the fans,” she says.

It could be that Oleg S. has it spot-on when he assesses the attraction of his Twitter account. He saw gif creation as an obvious next step after live-tweeting matches.

“In some cases it was easier to show what happened on the court rather than try to fit it in 140 or 280 characters,” he explains. “I was interested mostly in players’ funny reactions or outbursts – they are people, with their emotions, and not just robots that are supposed to run and hit the ball. This emotional, human side – for better or worse – is what makes them relatable.”

As for the future, that is still in the balance. Two years ago, the gifs from the French Open were removed from Alex’s Twitter account but restored after he made his case to the social media company. This year, he has heard nothing more, and vowed that he will not make any more gifs or post anything on his account at all until he gets his creations back.