Medvedev: “Winning a Grand Slam final in straight sets doesn’t feel the way I felt after the Popyrin match” 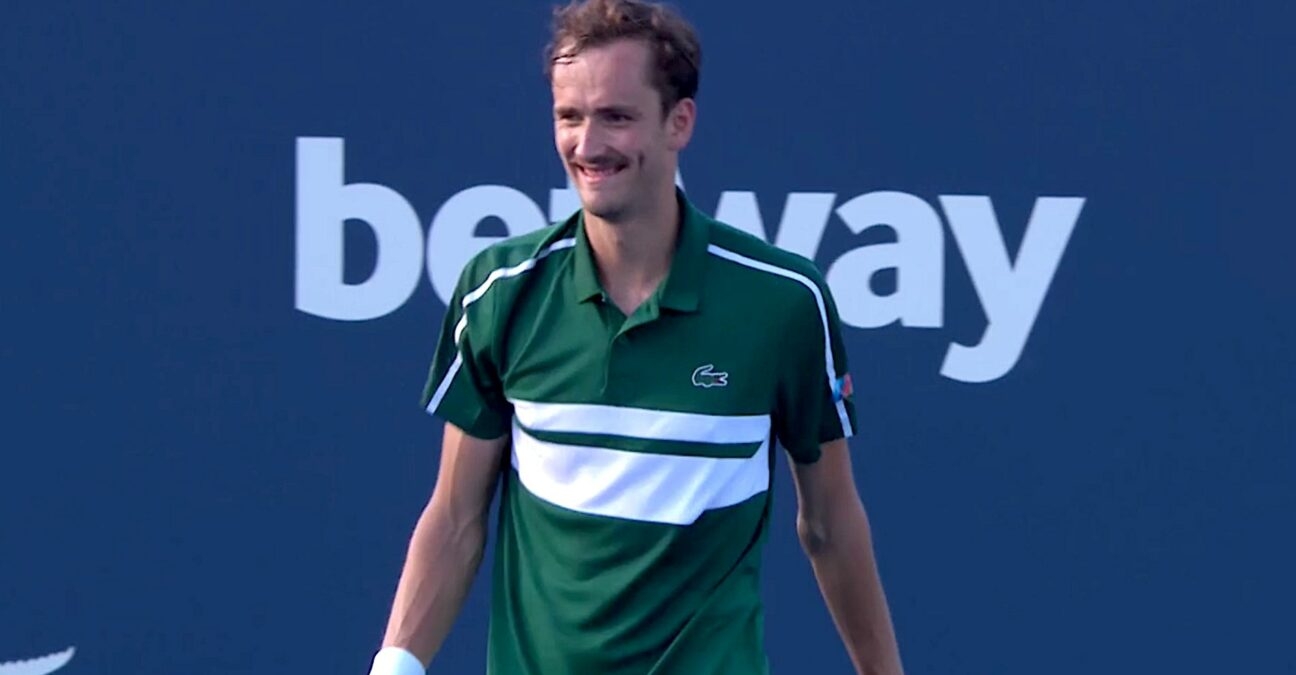 World No 2 Daniil Medvedev had more than an eventful Sunday at the Miami Open before he reached the fourth round of the ATP Masters 1000 event. The top seed won the first set and held three matchpoints while serving at 5-3 in the second against his opponent Alexei Popyrin, before the Australian fought back to force a decider.

Hampered by severe cramps in the third set, the Russian limped around the court and struggled to walk straight several times before he closed out the 7-6, 6-7, 6-4 win in two hours and 37 minutes.

Medvedev is now through to the round of 16 in Miami, where he will take on American Frances Tiafoe. The Russian spoke to the media after his win over Popyrin where he spoke about the match, the cramping and his fourth-round encounter against Tiafoe.

How much pain were you in, the cramping? Can you just talk us through the end of the match there, how you even were standing at that point? Looked like it was a struggle to even stand up.

“It was. It was really painful. The thing about standing up is that few moments during rallies I felt like my legs were not following me anymore. The only thing I was thinking about is not to fall down, because if you fall down, I don’t think I would be able to get up. We saw it few times, you know, on the tennis court. So there were some moments where I just wanted, you know, to lay down and say, Okay, it’s over.

So I knew that that’s the thing I couldn’t accept myself to do. Yeah, I was in big pain. The biggest pain was when I actually got a 4-3 break up, and after the first point I don’t know what happened, but I, like, I probably didn’t feel it that often in my life, maybe two or three times before, and my serve, which was actually I would say maybe even terrible during the match, saved me then. So thanks a lot to my serve.”

How are you feeling now?

“Now (it) is okay, because two hours (have) passed, you know, you do the recovery, get some fluids, you rest. I was not running on a treadmill. Now I’m feeling good. Definitely (the) legs are really sore after they were cramping, but (I have) a day off tomorrow so nothing to worry about.”

How scared were you during those cramping situations? Because I think at one stage when you were walking to the baseline I thought it looked like you were mouthing, “ow, ow, ow.” At times it did look like you just managed to save yourself from falling. Were you concerned that you might not have finished the match against Alexei?

“Definitely. I mean, at the end it was just that I almost couldn’t walk. My legs were, again, not following me. I couldn’t bend it or make it straight, like I had to keep the same posture. I couldn’t make a step more than, I don’t know, 10 centimeters. But the thing is that, funny thing about all this, is that on the serve, for sure, it’s better when you can push, you can jump and everything, but shoulder and arm makes also a big part. So I knew I just have to put the serve in, try to hit it strong, and it worked well.

To be honest, usually in these moments, you’re not even thinking about winning. You’re just thinking, okay, how can I maybe stay in this match or something like this. For sure on the other side for Alexei it’s not easy. He sees that I’m struggling. He tells himself, Okay, I’m going to put some balls in the court, he’s going to not be able to play it. The hand gets shaky, gets tight, he makes some errors and the match is mine.

Yeah, I feel that it was a funny match in a way, good match to remember for me, of course, not for him. You know, the funny thing is that I should have won in two sets. We would not be talking about any of these things. But here we are, so yeah, a match to remember, for sure.

The three match points in the second set and then one hour later you get a fourth match point, how relieved were you when that last point was finished?

“Yeah, three match points, third one, I mean, tough one to forget because, again, should have won it. Was on top of the point. That’s where I actually am not happy with the way I played today, because I feel like there were many small moments where I could have done just one shot better and it would be over.

Same like on the match point with the forehand. But soon, yes, he missed a slice on the match point and the match was over, it was a huge relief. Not for my legs still because needed like good 10 minutes to stop cramping, but for the mind it was just unbelievable. I think, I mean, winning a Grand Slam final in three sets, straight sets, doesn’t feel the way I felt after the match point today (smiling).

How did Meddy do it 🤯

A cramping @DaniilMedwed finds a way to notch a dramatic 7-6 6-7, 6-4 triumph over Alexei Popyrin, to reach the #MiamiOpen round of 16. pic.twitter.com/ETBpuKtXwH

Now that you’re relieved for having won this difficult match, how do you envision the next one? How do you prepare looking forward to the next round?

“Frances (Taifoe), great player, especially playing good here in Miami from what I saw, beating (Dan) Evans in amazing match, amazing comeback. So going to be a huge matchup, I feel like. Again, today I have recovery sessions in the evening. Tomorrow a day off. So I’m going to be 100% ready for my match, that’s no doubt, and looking forward for a great match. (Note – Medvedev made his comments prior to the completion of Tiafoe’s win over Dusan Lajovic)