Every day Tennis Majors takes you back in time to celebrate a great moment in tennis history. Today, we go back to 1987 to witness how Ivan Lendl set a new record by clinching a fifth title at the Masters Grand Prix, a record which would remain unbroken for 24 years 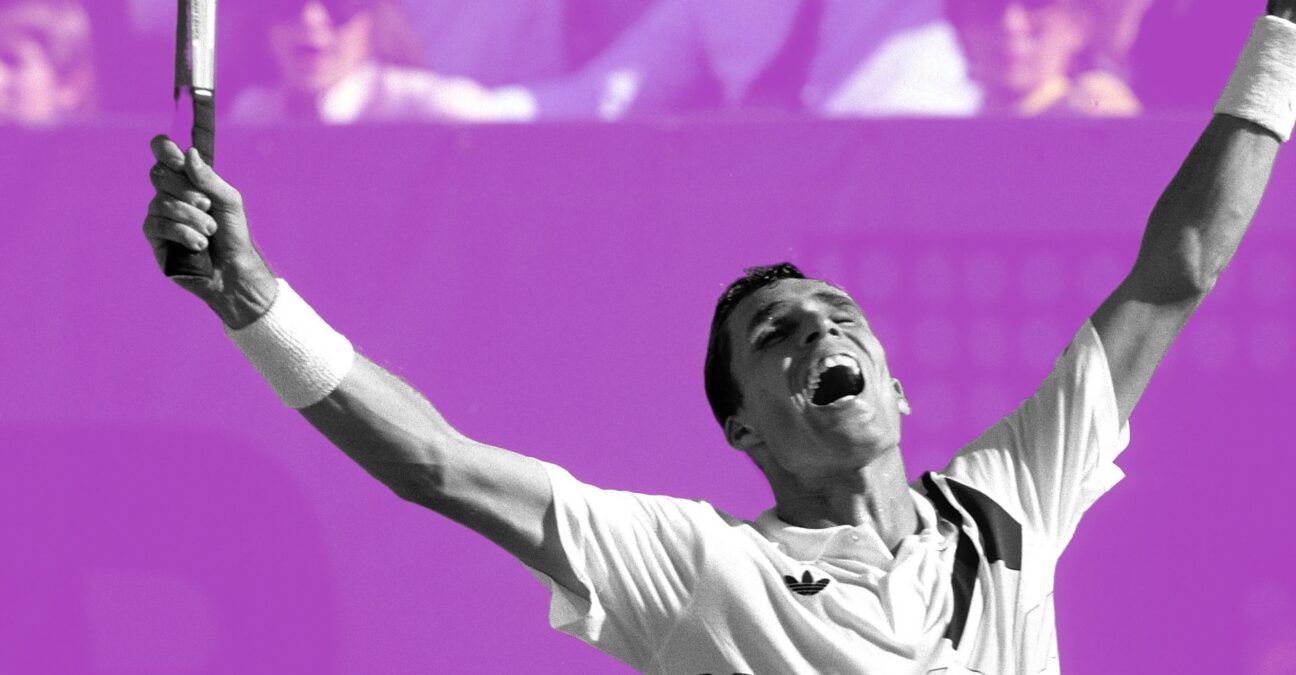 Born in 1960, Ivan Lendl set new standards in the baseline game, with a very powerful topspin forehand that allowed him to play aggressively while staying extremely consistent, pushing his opponents into a very tough physical challenge. He also set new standards in work ethic, practising more than anyone before, paying attention to his fitness and to his diet in a way which tennis players were not used to. After turning professional in 1978, he stood as one of the four best players in the world since 1980, along with Bjorn Borg, John McEnroe and Jimmy Connors. Although he had won dozens of ATP tournaments, including the Grand Prix Masters in 1982 (defeating Vitas Gerulaitis, 6-7, 2-6, 7-6, 6-2, 6-4), he didn’t claim a Grand Slam title before 1984. In fact, he had been defeated four times in Grand Slam finals, once in Roland-Garros (in 1981, defeated by Bjorn Borg), twice at the US Open (beaten by Jimmy Connors in 1982 and 1983), and once at the Australian Open (lost to Mats Wilander in 1983). In 1984, Lendl eventually triumphed at the 1984 Roland-Garros, defeating John McEnroe in an epic final where he came back from two sets down to lift his first Grand Slam trophy (3-6, 2-6, 6-4, 7-5, 7-5). In 1985, he reached the final at the French Open (defeated once again by Wilander), but at the US Open, a few weeks after becoming world No 1 again, he claimed a second Grand Slam crown, beating John McEnroe in the final (7-6, 6-3, 6-4). In the following years, Lendl dominated the game, clinching four Grand Slam titles at Roland-Garros and the US Open, in 1986 and 1987. He hadn’t managed to triumph at Wimbledon, although he finished runner-up twice, in 1986 (to the young defending champion Boris Becker, 6-4, 6-3, 7-5) and 1987 (defeated by Pat Cash, 7-6, 6-2, 7-5).

Mats Wilander, born in 1964, had been very successful at a particularly young age. In 1982, aged only 17 years and 10 months, he had become the youngest player ever to lift a Grand Slam trophy, beating clay court legend Guillermo Vilas in the final (1-6, 7-6, 6-0, 6-4). He had also made himself famous for a memorable act of sportsmanship earlier in the tournament. In the semi-final against Jose-Luis Clerc, on his first match point, he reversed a call that was sealing his victory after the umpire had already announced ‘game, set and match’. In 1982, in a Davis Cup quarter-final, he also played the longest match of the Open Era, losing after six hours and 22 minutes of play to John McEnroe (9-7, 6-2, 15-17, 3-6, 8-6). Runner-up to Frenchman Yannick Noah at Roland-Garros in 1983 (6-2, 7-5, 7-6), he claimed a second Grand Slam crown a few months later, defeating Ivan Lendl (6-1, 6-4, 6-4) to triumph on the Australian grass to general astonishment, as his game style was more suitable for clay court. In 1984, he successfully defended his title in Melbourne (defeating Kevin Curren in the final, 6-7, 6-4, 7-6, 6-2), and in 1985, he added a second Roland-Garros trophy to his list of achievements (beating Lendl in the final, 3-6, 6-4, 6-2, 6-2). Wilander had also led the Swedish team to its first ever Davis Cup title, in 1984, a feat that was repeated in 1985. In 1987, the Swede had reached the final of both Roland-Garros and the US Open, where he was beaten each time by the undisputed world No 1, Ivan Lendl.

Founded in 1970, the year-end Masters Grand Prix (now the Nitto ATP Finals) was the final showdown between the eight best players in the world. Held in a different location every year at the start, it settled at the Madison Square Garden, in New York, from 1977 until 1989.  As only the eight top players of the year qualify for the event, the list of its former champions is nothing short of impressive. Ivan Lendl was one of the best performers at the Masters Grand Prix, where he had appeared in the final every year since 1981, having claimed the title four times already.

In December 1987, Ivan Lendl was the undisputed world No 1. Even though his game style and his personality didn’t appeal much to the general public, the Czech had proved himself almost unbeatable claiming no less than nine titles, including Roland-Garros and the US Open. His only real disappointment had come, as usual, at Wimbledon, where he was defeated in the final by Pat Cash in straight sets.

At the Masters Grand Prix, in New York, Lendl dropped only one set on his way to the final, where he faced world No 3, Mats Wilander, whom he had already defeated in two Grand Slam finals that year, and against whom he hadn’t lost since Roland-Garros 1985.

Lendl put pressure on Wilander’s shoulders since the very beginning, breaking his serve on the first game. Although the Swede managed to break back a few games later, he was no match for Lendl on that day – Peter Alfano, from the New York Times, wrote that “Lendl overpowered Wilander (…), washing over him like a wave”. The Swede, totally outclassed in the baseline contest, rushed to the net in a desperate attempt to disturb the world No 1 – in vain. Once broken in the second set, Wilander lost all his remaining confidence and was defeated in straight sets (6-2, 6-2, 6-3).

“In 1987, I lost to Ivan in the final of the French Open, that was pretty close,” Wilander would tell Alex Corretja in an interview for Eurosport in 2020. “I lost in the final of the US Open, that was also pretty close. I would have needed to win at least one of those to feel like I had any chance. (…) At that time, I think I was world No 2 (he was world No 3), and a spectator in the middle of the third set, he screamed out something like, ‘Hey, come on, Wilander, what are you ranked? Two…hundred?’ And I’m like, God, take me out of here.”

“I have to say 1987 may have been my best year on the Tour,” Lendl would tell Corretja. “And that match we played at the Madison Square Garden may have been one of the best matches I played. (…) I fell into the zone and I felt like I could do nothing wrong that day.”

Firing 34 winners, Lendl claimed his tenth title of the year, the 70th of his career, and his fifth at the Masters Cup – setting up a new record, leaving Ilie Nastase and his four titles behind.

Lendl would never triumph again at the Masters Cup, although he would reach a record ninth consecutive final in 1988 (defeated in five sets by Boris Becker, 5-7, 7-6, 3-6, 6-2, 7-6). Lendl would add two more Grand Slam titles to his list of achievements (at the Australian Open, in 1989 and 1990). His record of five titles at the tournaments of the greats would only be equalled in 2010, by Roger Federer, who would then go on to beat it with a sixth triumph in 2011.

1988 would undoubtedly be Wilander’s peak year: after claiming three out of the four Grand Slam titles, he would reach world No 1 on September 12. However, the 1988 US Open would remain Wilander’s last Grand Slam title. An unexpected loss to Carl-Uwe Steeb in the Davis Cup final would later appear as the first sign of Wilander’s decline. He would never reach another Grand Slam final, and by the end of 1989, he would be out of the top 10 once and for all.